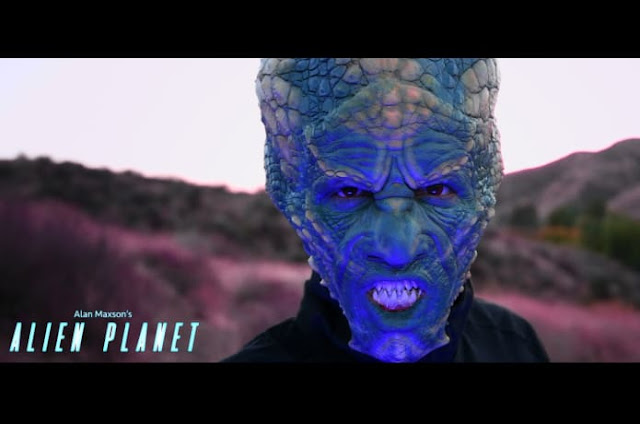 Alien Planet is an upcoming sci-fi adventure film coming from Los Angeles based filmmaker Alan Maxson. This is to be the third for him as writer and director, with Maxson most known for his creature acting career. That career has included such highlights as being one of the performance capture actors for King Ghidorah in Godzilla: King of the Monsters, Blade in the great Puppet Master franchise, he was even a zombie in the opening sequence to Eli Roth's History of Horror show. He also has 14 years of post-production experience.

Alien Planet is about two different and previously warring alien species that have both run out of a water supply for their people. In desperation these species team up and travel to a dangerous world in order to find the key to rejuvenating their planets. It is described in the press release as 'a meaningful story that mirrors struggles found within humanity'. The big difference touted for this film is that there will be no human characters, instead there will be practical effects makeup, monster suits and puppets to represent the aliens.

There is currently an Indiegogo campaign running to get funds to help get the movie made. As always there is the usual assortment of perks depending on how much you choose to help. Currently the film has raised over 100% of its goal with more than twenty days still to go. The Indiegogo page can be found here.
Maxson says about the film: "My years of experience as an actor and editor have prepared me for Alien Planet. I am extremely excited and passionate about this film and I can not wait for the world to see the finished movie! So if you love what we did in the trailer, please contribute to our campaign and help bring this bad boy to life. Thank you very much to everyone who helps us reach our goal!".

Posted by Daniel Simmonds at 06:30