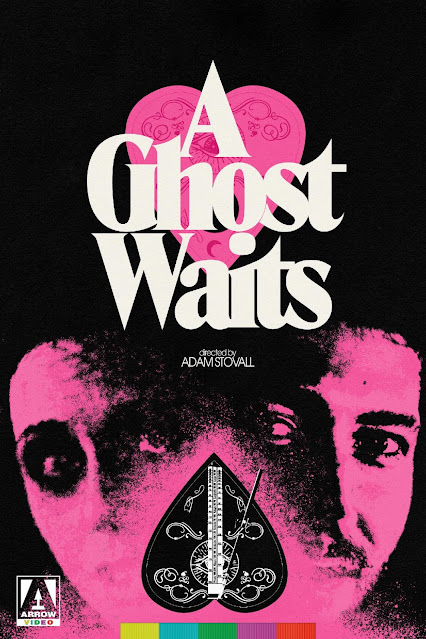 A Ghost Waits is a charming low budget indie that combines elements of horror, comedy, and romance all into one. This was the work of Adam Stovall who along with directing this also co-wrote the story, was responsible for casting, did additional camera work, and produced and edited this. Heck, he even shows up in a bit part acting here. This is very much a film whose ideas and themes could only really ever be explored in such a way in an indie piece.

Jack (MacLeod Andrews - Doctor Sleep, They Look Like People) works for a housing company, his job is to clean up houses after the former tenants have moved out in order for them to be ready for new tenants. Due to his own house being fumigated he needs somewhere to stay, and with his small circle of acquaintances not being forthcoming with help he decides he is going to stay at the current property he is fixing up. Unknown to him however this house is haunted by Muriel (Natalie Walker - Search Party, Bojack Horseman), a ghost tasked with scaring away any new visitors to her home. She has been successful up to this point, but finds Jack to be a challenge. Starting off antagonistic to him, over the course of days the pair begin to realise that they have much more in common with each other than either of them could have realised. 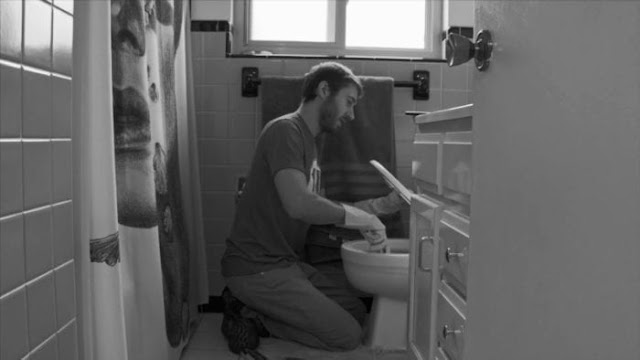 The horror part of A Ghost Waits is literally the first couple of minutes of its one hour twenty minute run time. It begins with the former family fleeing in terror from the property in a neatly edited chaotic montage of stop start scenes. I was actually still sorting out my headphones at this point in the movie and so nearly jumped out my skin when Muriel started screaming, as I had inadvertently gotten the volume on my headset up to max! Aside from the woman being a ghost there isn't really any more horror to be found here, outside of a couple of brief scenes. After that prologue this turns into a comedic piece for its first two acts, before taking on a much more dramatic and romantic story in its final third. It is quite po faced and earnest in this third act, regardless of your thoughts on this the film has a lot of heart.

The whole film is shot in black and white which lends itself well to the indie feel. I sometimes questioned if this choice of lack of colour was designed to hide the make-up effects on the ghosts. There was one scene in particular where it seemed Muriel's make-up was on quite thick, enough that it was noticeable that her eyelashes were covered in the powder. I could never work out if this was intentional or accidental as it was only in the one scene this occurred. Special effects are minimal but they get the job done, doors opening on their own, flickering lights, and ghosts fading from view all looked good. This features a tiny cast of characters with Jack and Muriel being the main ones. The only side character of note is Muriel's handler (Amanda Miller - The Grave Caller, Jacob's Paradox) and another ghost named Rosie (Sydney Vollmer). For much of the first and second act it is just Andrews predominantly and he carries the film well due to the likeable persona he plays. 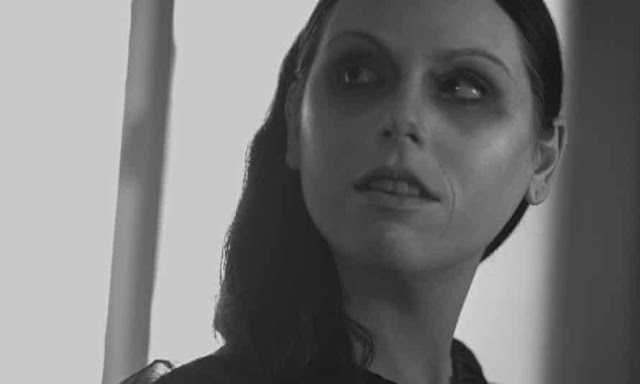 The theme of the movie is about loneliness and a feeling of not connecting with the world. Both Jack and Muriel have been alone for a long time, both carry on with their respective 'lives' doing the things they need to do but with an underlying sense of being lost. This comes to a head in the films third act where the comedy is almost dropped entirely, making for a drama piece that is almost a bit awkward in how serious it suddenly becomes. The likeable leads save this though and while some choices are made that can be seen as quite dark this culminates in happiness of a sort.

A Ghost Waits tells a story that only an indie film would be able to get away with. The performances of the main cast, Andrews in particular made for endearing characters who you can't help but want to root for. A Ghost Waits joins the subscription based Arrow platform (now available to UK subscribers) as part of February's line-up, alongside Dave Made a Maze.