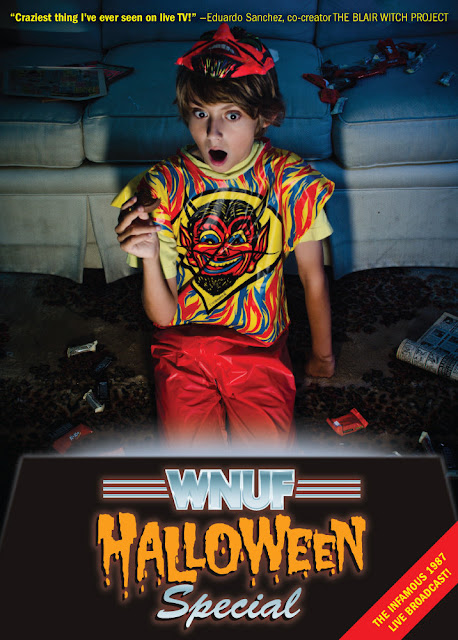 WNUF Halloween Special is a found footage comedy horror co-directed and co-written by Chris LaMartina (What Happens Next Will Scare You, President's Day) that leans in hard to its premise with the film not once breaking the illusion of being the contents of a VHS tape. There is no typical intro blurb on a black screen, there are no end credits, instead this tries to give an authentic feeling of eighties TV exaggerated for comedic effect.

In 1987 WNUF TV put out a Halloween Special. News anchor Frank Stewart (Paul Fahrenkopf - President's Day) was reporting live from a house in which two parents were murdered by their child some twenty years previously. His intention was to explore the house, alongside a priest (Robert Long II - Malice: Origin) and two psychic investigators, Louis (Brian St. August - Zombie Doomsday) and Claire (Helenmary Ball - What Happens Next Will Scare You). Over eighty five minutes this investigation is shown, around plenty of ad breaks and news reports. 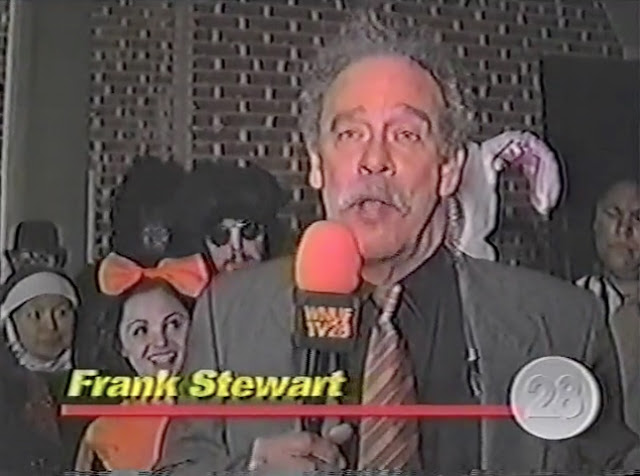 Due to sticking to the format of a pre-recorded broadcast this found footage is full of adverts, those coming here purely for the main storyline may be disappointed to find that only really constitutes about fifteen to twenty minutes of the whole piece. It's a good ten minutes before we are even first introduced to Frank Stewart. I think it may have been designed to be one of the soft humour ideas here but most of the horror that occurs takes place during ad breaks. On a few occasions it comes back to the house to reveal things had happened while we were stuck watching adverts. I appreciate sticking so rigidly to its authenticity but did lead to a stop and start approach to the main plot. Whenever things started to get moving they would then get railroaded with yet more adverts.

The adverts themselves are made up mostly of stock footage with some actors spliced in to either do over the top voice overs heavy on inference, or to play characters, such as a doctor talking about exchanging Halloween candy for money in order to save people's teeth. There are a heck of a lot of these adverts and while they are well made and feel very much of the time they also became a little dull. Occasionally it will be like someone is fast forwarding the tape and parts of these will be skipped, always welcome. The investigation itself was a bit more interesting to watch, much like actual TV it was frustrating for them to constantly be cutting out to ad breaks. 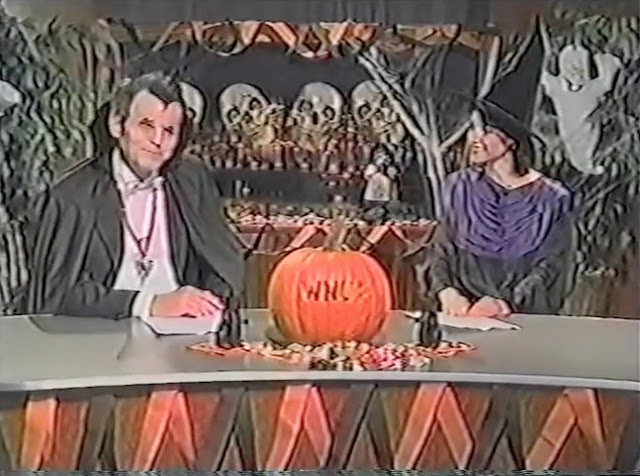 The film looks terrible, this is of course purposeful though, it looks like it was recorded on VHS with grainy footage, diluted colours and occasional static. The actors come across as very exaggerated but it is all very fitting and appropriate. It felt obvious to me it wasn't real but regardless it still felt like a realistic slice of eighties local America news. While this is a horror comedy this isn't something full of jokes and comedic moments, instead the humour comes from how rigidly everyone is projecting the characters they are playing.

WNUF Halloween Special is a bit of a one trick pony. If you find the notion of watching a lost VHS tape to be an entertaining one then there is enjoyment to be found here, but if you are after something far more focussed on the horror side of things then this will no doubt leave you frustrated. For me, I can't say this is something I would go back to, but as a one off experience I really liked the nostalgic feel and like the commitment shown here. WNUF Halloween Special is currently streaming on Shudder.