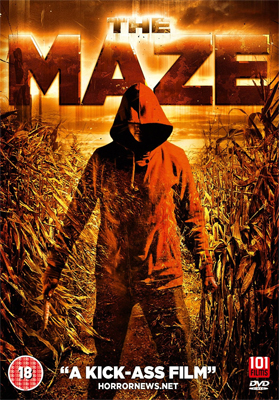 Back in 2016 I reviewed Nocturne, a fantastic supernatural horror directed by Stephen Shimek. I think it is a good thing that I didn't discover The Maze was also directed by Shimek until after I had seen it as otherwise I may have been disappointed with this mostly bland horror. A cornfield sounds good as a location for a slasher film to be set at, yet it soon becomes clear the setting is actually kinda dull. A mid film twist arrives to save us all from this boredom thankfully, but that twist I can't go into detail about for fear of spoilers.

Five friends have travelled out of the city for an outing to their county's largest corn maze. These friends, who include among them Jordan (Shalaina Castle - Slashdance), Cole (Brandon Sean Pearson - Natures Plague), Alison (Clare Niederpruem - Nocturne), Will (Kyle Paul - Gotham) and Collin (Tye Nelson - Terror Island) arrive after closing time due to getting lost. Despite the maze being closed for the day they decide to head into it, and then decide to play a game of tag. Unknown to them however there is a sixth person hiding out in the cornfields, someone whose version of tag is a lot more deadly than the others... 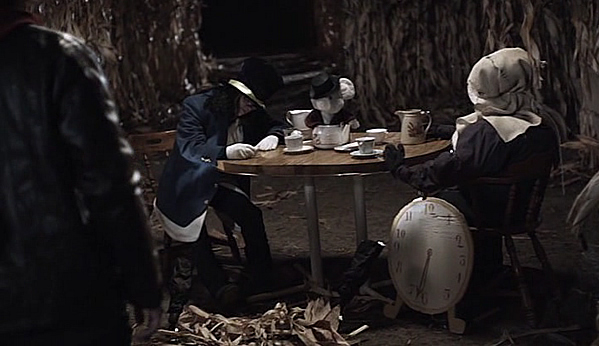 At the halfway mark of The Maze I was finally interested in what was happening. This follows the tropes of the slasher genre enough that not only has a character gotten the equivalent of a twisted ankle by this point, but they are the 'final girl'. With forty five minutes to go and the cornfield location spent I was intrigued where this would head. If the whole film had followed the route of the first half then this would have been looking at a much lower score, likely around a two or a three out of ten. The friends are a dull bunch and seemed far too old to be playing a game of tag. One sole good idea here was that The Maze begins with a prologue of a mortician examining a badly burnt corpse that is wearing a necklace. It is later revealed that whoever is 'it' in the game of tag has to wear that self same necklace, placing the prologue in the future. It seemed like who the identity of the corpse was would become important and much is made of this necklace constantly swapping characters, heck, even the killer ends up wearing it for a time. Not much really comes of this though, it felt like a bit of a wild goose chase with this petering out and having no impact on anything.

The killer here is a let-down as it is just some guy wearing a red hoodie. He isn't tall, he isn't well built, he doesn't look intimidating or strong. The only bit I could take away from this slasher was that they seemed able to run really fast. Talking about the killer, it felt a bit random he just so happened to be hanging around a remote corn maze on the off chance it would get visited at night, I wonder what their plan would have been should no one had actually turned up? Going along with his normal look comes the kills which all manage to look lacklustre. One character is even decapitated yet it just looks so unexciting on screen. Maybe trying to carve out its own identity The Maze features what I believe is the first backward throat slash kill I have seen. By backward I mean the back of the victims neck is sliced open rather than the far more dangerous throat part. The death scenes lack impact, they lack blood and were a wasted opportunity. 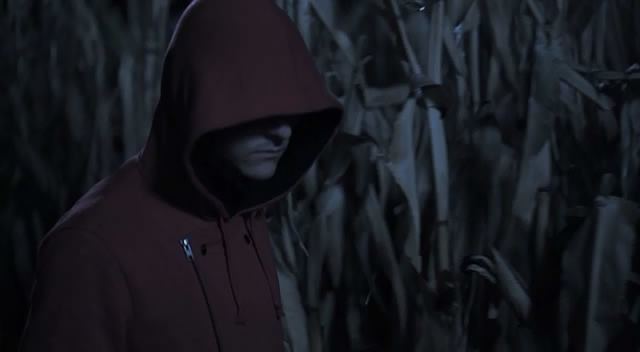 The second half becomes a lot more bearable, but as I stated in my introduction I can't talk about this for fear of spoilers. If anyone has read Dean Koontz's Intensity then they may be clued in as to what happens. I not only liked this twist, but it also meant the underwhelming cornfield location could be thankfully left behind. Of that field, characters are constantly being chased by the killer around the maze, but we are shown on multiple occasions that the corn itself is very passable. If I had been there I would have bolted in a straight line right through the corn and to freedom, it seemed the characters here forgot that was an option!

I would be lying if I said I expected The Maze to be any good. The first half is hardly a-maze-ing but I appreciated where this eventually ended up. I wouldn't go as far as to say this was a terrible horror, but it is sadly mostly forgettable.