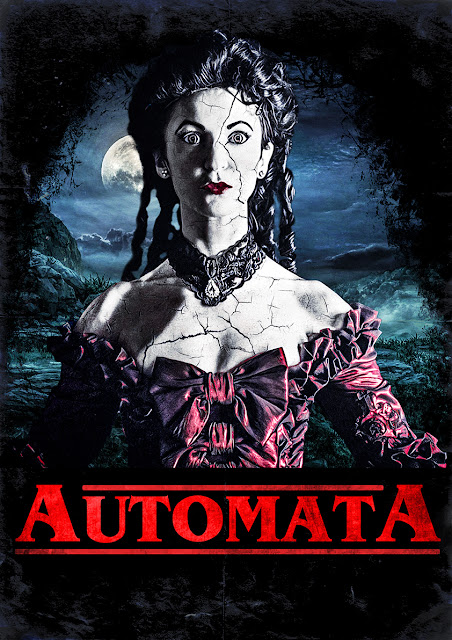 I first heard of Hex Studio's The Devil's Machine in 2018 when it was still under its original title Automata. It was directed by Lawrie Brewster and written by Sarah Daly who between them have created the excellent Lord of Tears, as well as The Unkindness of Ravens and The Black Gloves. I hadn't heard of its name change and so as I sat down to watch this I was delighted to see it came from a team with such a strong background.

Antique expert Brendon Cole (Jamie Scott Gordon - Lord of Tears, The Unkindness of Ravens, The Black Gloves) has been hired to authenticate a 300 year old lifesize clockwork doll (Alexandra Hulme - Lord of Tears). It had been thought to be the stuff of legends, but was discovered hidden in a secret room in a Scottish mansion. The legends around the doll say that everyone who came into contact with it ended up going insane, and that in mysterious circumstances the doll one day vanished into thin air. Brendon goes to the mansion along with his beautiful wife/daughter/assistant (I'm not sure exactly which of these she was), Rose (Victoria Lucie - Captivity). He is given a week to authenticate the doll, with a very high reward should he be able to prove it is in fact the item of legend. However, as the week goes on both Brendon and Rose start to experience vivid hallucinations, with it seeming the creation has the power to affect the minds of those around it...

I loved the set-up for the story here and initially it was everything I hoped it would be. The story to begin with has Brendon tasked with making the doll perform five 'miracles' that written notes from the time of its creation said it was able to do. Being an antiques expert I don't know why he couldn't have found a different way to find out if it was the real thing or not, but the idea of these five miracles was a decent hook. I fully expected each of these would be more and more creepy and that they would take up the majority of the movie. Instead this is far more a ghost story. As cool looking, and as genuinely creepy as the doll is it didn't really get a starring role. As The Devil's Machine goes on it becomes far less about this creation and far more about the power it seems to wield. The horror comes mainly from the powdered wig wearing ghosts of the past, as well as the uncontrollable bizarre behaviour the two start to exhibit.

I liked how the story of the doll was told. From the prologue which sees a gun battle between soldiers trying to gain control of a large trunk it is clear actual flashbacks will be shown rather than narrated backstory. I especially liked the way the past would blur with the present, such as when Brendon is trying to go through the steps to get the doll to perform one of its five actions. His thought process is represented by him literally being on the same set as the past, with characters all around him but both oblivious to each other. There was no mystery as to the power of the doll as this is established immediately in the prologue. Instead it is more about how this is all happening, something which is never explained. Going by the film's title alone I assume the thing was possessed by a demon, no idea though. As the story plays out the doll takes more and more of a back seat to the action. This was a real shame as the sound effects used, and the jerky way it performs its motions made it sublimely creepy, I always paid attention to the face and was pleased to see it never blinked once, or indeed seemed to make any movement that would indicate it was an actress.

While there are a fair few characters it is Brendon and Rose who feature for the most time. I feel I may have missed a key bit of dialogue that established what they were to each other and spent the run time confused as to their relationship. Either way, when they begin to fall under the control of the evil they take on a perverted father/daughter relationship which leads to some uncomfortable scenes and dialogue between them. Not having a good idea of their personalities prior to this influence it was hard to tell how much of themselves were ever in any single scene. The many ghosts are comically evil, but I thought the heavily caked on white make-up and the grotesque sneers and grins on the faces of these made them fun antagonists, even if I felt they detracted from what the initial story felt like it would be.

On paper The Devil's Machine sounded like a fantastic idea, and to begin with at least I really enjoyed where it seemed to be going. However, by the film's third act it had gone off the rails a bit, seeming to lose some of its cohesiveness in exchange for meandering madness. Overall it was an interesting idea to play around with, but for all its fascinating backstory the present day moments just couldn't match. The Devil's Machine is due to be released on 12th April from High Fliers Films.