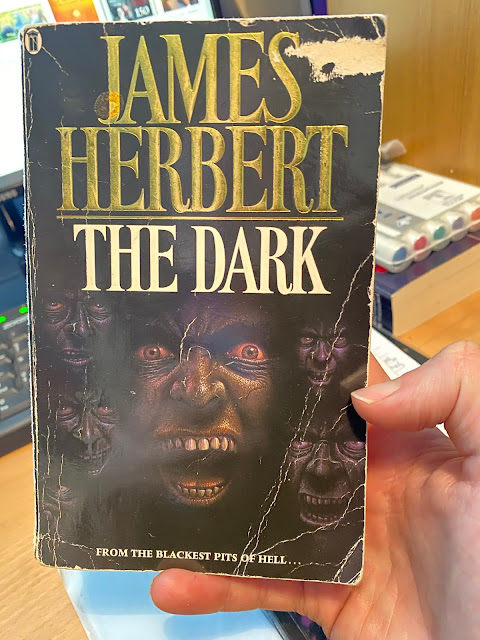 Despite loving horror films it was a long time coming before I started reading horror books, and it took me a while to realise who I liked to read and who I didn't. To my surprise I found Stephen King (so far) to be mainly very overrated. Thankfully there are some good horror writers out there. Obviously David Moody (the Autumn series) and Duncan P. Bradshaw (Cannibal Nuns from Outer Space!) have zombies and comedy horror covered, and for more broad horror you have authors like Sean E. Britten (Tik), hit and miss Dean Koontz (Intensity) and James Herbert ('48). The Dark is a 1980s horror novel from Herbert and continues the common trend I've noticed in his books of both being a good read, and featuring an enemy that uses some aspects of the zombie genre.

I read this over the course of about eight months and so my memory of the earlier parts may be a little fuzzy, unavoidable spoilers to follow. Basically, there is a house of evil that exists on a street in London. Years previously a crazed cult leader and his followers committed ritualistic suicide there and it's now said to be haunted. Chris Bishop is a debunker of supposed supernatural events and he has been hired to prove there is nothing wrong with the house. He also just so happens to be the man who discovered the aftermath of the cult suicides a year or so previously. He teams up with a psychic named Edith, as well as a blind paranormal expert, Jacob Kulek and his daughter Jessica. All along the street where the house resides people have been going insane and committing senseless crimes, after the investigation the decision is made to destroy the house, not realising that this releases an evil force known as 'The Dark' which slowly spreads its corrupting influence over the surrounding city.

Like many horror novels this is split into different parts, each new one an escalation of events. Initially I figured this would be a haunted house type novel, the horror all restricted to the street in which the house is to be found. Over the course of the novel though this horror spreads and it starts to feel like a localised apocalypse (Londocalypse?). The similarities to both the zombie and vampire genres come in how the Dark affects its victims. Like the Taken from the 2010 video game Alan Wake the enemy here thrives in darkness. Much of the book has characters in various locations battling the zombie like infected and trying to survive until the onset of dawn when the Dark loses its power. This leads to a whole load of different set pieces, such as when Bishop is trapped in a bathroom at a mental asylum by a horde of  patients, a siege in a block of flats, and various other sieges at each of the main characters houses. Conventional weapons work on these foes, but also bright lights work, so the flash from a camera, torches, and flames all help to repel the dark obsessed maniacs. There is a very high body count here with hundreds, if not thousands of people killed by the books conclusion.

With the story focussed mainly on the protagonists occasionally there were cutaway chapters or paragraphs to illustrate how far reaching the evil force is spreading. A football match, a religious gathering and more random incidents help in displaying the unfolding mayhem. I did feel the antagonist side was never that well defined. I understand the Dark is meant to be a force older than time, but due to this it doesn't exist as a character in itself. Those affected are said to talk to it but this is only ever shown as the negative thought processes they find themselves having. I guess the main antagonist in human terms is Kulek's old partner Boris Pryszlak, but he only appears in a handful of nightmare sequences. I liked how crazy and far reaching events had gotten by the books conclusion. It is hardly original, but it may well have been at the time of writing. I will say that I didn't think the book concluded well. With pages running out I was wondering how it would finish. Weirdly it kind of cuts away during the finale with a brief epilogue explaining in general terms what had happened. I can't say I thought that was an effective way to finish things, even if prior to the abrupt end things had been getting exciting.

The Dark took a while to get going, but when it did it never let up all the way to the end. Reading it in a modern context some of the language used, that to describe black characters in particular felt very outdated, but look past that and you have a story that while not feeling as original as it likely once did was still well written and engaging.