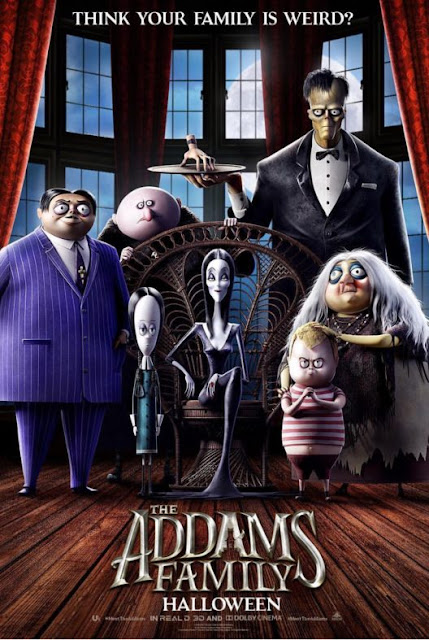 I've once again come to the conclusion that I need to branch out more in the movies I watch for review. 99% of what I watch are new films that have been sent my way, yet there are hundreds, if not thousands of horror films out there that I have never so much as glanced at. At random I picked a film from my infinite Netflix list and it happened to be the 2019 animated children's horror The Addams Family.

Thirteen years after moving to New Jersey the Addams Family discover a new bright and cheerful town called Assimilation has been built near to their mansion by TV host Margaux Needler (Allison Janney - The Help, Juno). She is horrified to discover their family house and has designs to change it so that it conforms to her idea of beauty. Meanwhile Wednesday (Chloe Grace Moretz - Susperia, Carrie) has begun to get tired of her family and becomes friends with Margaux's daughter Parker (Elsie Fisher - Despicable Me), who likewise is looking for change. While this is all happening, Pugsley (Finn Wolfhard - It, Stranger Things) is preparing for a rite of passage, but his inability to conform to the standards set by his father Gomez (Oscar Isaac - Ex Machina) is also causing problems. 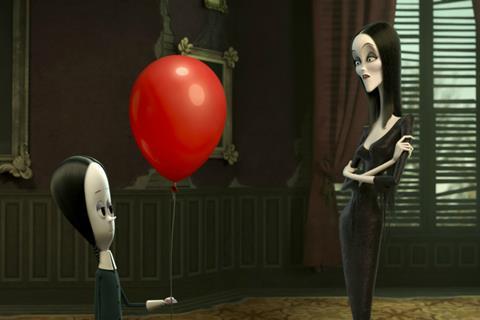 From the synopsis there is a clear idea that the moral being told here is that non conformity and individuality is a good thing and it shouldn't be seen as something to be against. People should be free to be who they want to be without judgement being passed if they are seen as different. This is a heavy handed message in that it bleeds into all aspects of the various storylines being told, but it is a relevant one. Being an animation rather than live action means that the horror aspect of the characters and setting can be more visually represented. From a sentient tree, to the house itself which has a voice there are many monsters and much madness here. Characters are very unrealistic in that all sorts of cartoon peril can befall them and they are perfectly fine, as to be expected and not a criticism.

It was nice to see many references to classic horror films out there, a lot of which I imagine would be lost on children. Moments that reference It, The Invasion of the Body Snatchers and Dracula all fit in well, while the CG used is consistent in tone. Personally I didn't really like the bizarrely proportioned characters, they are highly stylized. More pressing for me was the often terrible soundtrack which seems intent to include as many current pop songs of the time as possible. Most of these felt shoehorned in, but at least a few work. Cousin It for instance is voiced by Snoop Dogg so it makes sense one of his songs would be playing when this character is introduced. 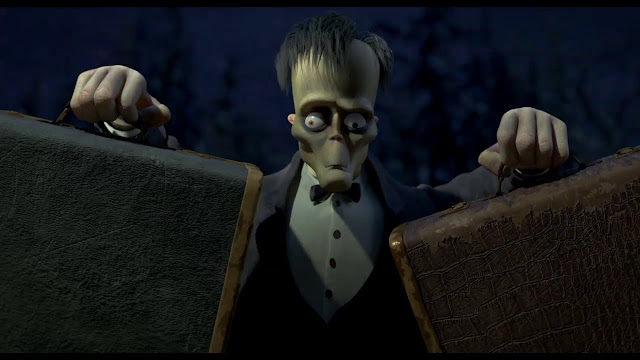 Being a kids film the story is a little bland at times, it did pick up from around the second act onwards. As a villain Margaux wasn't fantastic, there wasn't enough badness to her character which can be seen in the finale in which her personality seems to change on a dime to provide a happy ending for all characters involved. The voice acting was all decent, characters sounding like you would expect them to, and the prologue that serves as an origin story for the Addams Family arriving in America was handled well, again being about people being discriminated against for being different to the average person.

The Addams Family is obviously not going to be a scary film, it doesn't try to be and that isn't the point. While I didn't think there was enough going on to really make this a classic I still enjoyed it for what it is. The Addams Family is currently streaming on Netflix.