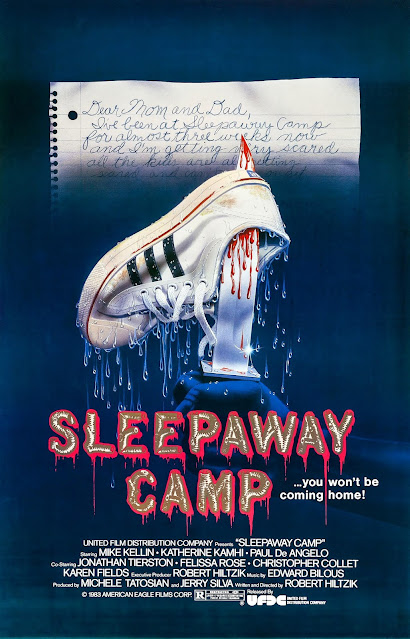 Sleepaway Camp is such a cult film that despite never having seen it I was well aware of the twist ending reveal of who the killer was. Due to this it was really hard to put myself in the mindset of someone who had never heard of this twist. Even so, I was really interested to see how this character would be handled, and if the film in general was at all memorable outside of its notorious shock finish.

As a child, Angela (Felissa Rose - Camp Twilight) was involved in a terrible boating accident that saw her twin brother and her dad killed before her eyes. Now 13 she lives with her eccentric aunt and her protective cousin Ricky (Jonathan Tiersten - Return to Sleepaway Camp). During summer, Ricky and Angela are sent away to a summer camp, with the shy and practically mute Angela getting bullied there. As the weeks pass people keep showing up severely injured or dead. At first it is thought to be down to accidents, but as the bodies pile up it starts to seem like there is a killer on the loose. 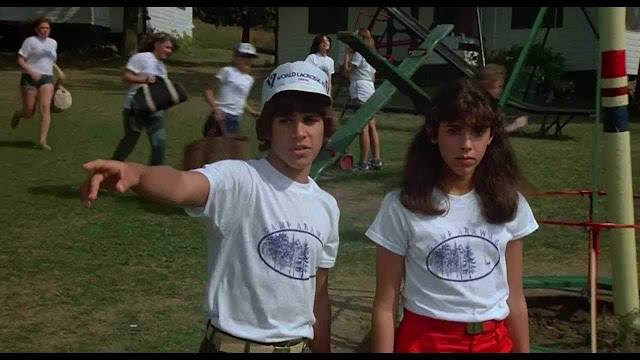 I will admit to not having seen a gigantic amount of 80s slashers but I'm pretty sure that usually it is older teens (typically played by adults) who are the victims of the killers wrath, here though the age range is on the whole a lot lower with the majority of the victims being young teenagers. While there was a large body count by the films conclusion this was slow to really get going. I think by the halfway point there had only been two attacks. I say attacks, as also different is that not all the victims of the killer die, just horrifically maimed! The Friday the 13th films have to have been an influence, at least with the location of a lake side camp mainly ran by young adults. I really don't rate that series at all, the lack of any kind of story in any of the entries really make them quite dull. It was nice that here there is more of a story with both Ricky and Angela getting character development. Angela in particular changed over the course of the film, initially she doesn't even speak but as she befriends Ricky's best friend she slowly comes out of her shell.

The kill count may be slight to begin with but the kills themselves are inventive with the ones that occur on camera featuring some nice effects. A highlight being a character who gets a large pot of boiling water thrown over them, the special effects for the bubbling blisters on the skin looked surprisingly great. Elsewhere it is always clear the corpses are not actual real people, yet I have seen much much worse looking fake bodies in hundreds of other movies over the years, these ones really do look good in comparison. It seemed clear to me the age range the killer would be in, but I don't think this was ever meant to be hidden. It made the kill scenes entertaining, especially with the camera often taking on the perspective of the killer. As to the big twist, I imagine it must have been startling and unexpected at the time, but I didn't think it was special enough that the killer's identity reveal results in a freeze frame image that the end credits then play over. 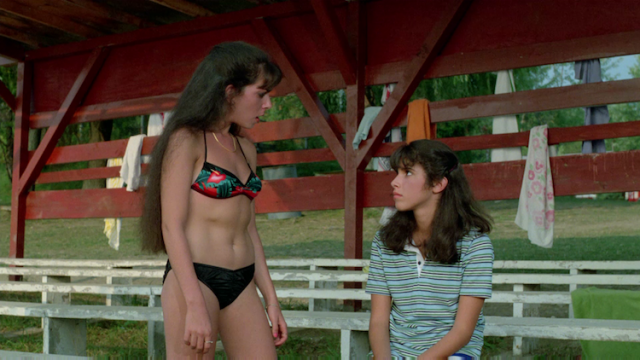 The acting varies a lot, I felt the acting of the children was much better than that of the adults. This is most noticeable in the film's prologue that due to awful editing and some poor reaction shots made what should have been a dark moment really amusing. The adult actors were either terrible actors, or had been directed to come across as over the top and unrealistic. There were a wide variety of bullies and people deserving punishment (within the context of the film world) so it was usually satisfying to see them get their just desserts.

Sleepaway Camp may be based on a twist that handles a sensitive topic atrociously, but the eighties were different times and so it seems a moot point to criticise that. Instead I found the film to be a decent slasher, I wish things had gotten moving a little quicker but other than that it wasn't bad. Sleepaway Camp is currently streaming on Shudder.