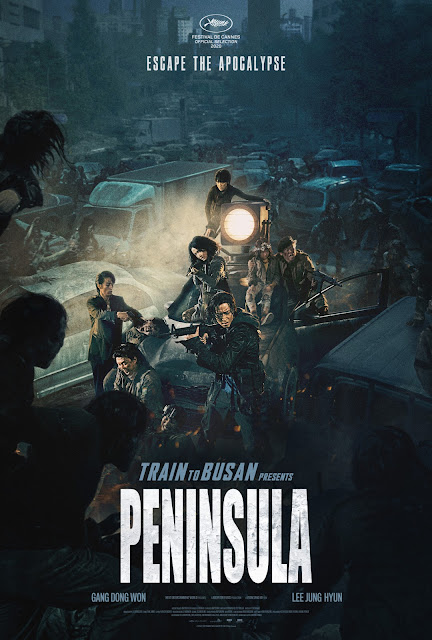 The 2016 South Korean zombie horror film Train to Busan was a superb movie. It was thrilling, urgent and had undead who really didn't look or act like much else out there. The same year the animated prequel Seoul Station was released and that paled in comparison. It was perfectly adequate but hardly something I had any urge to return to. Peninsula is the latest film in the series, again co-written and directed by Sang-ho Yeon, I had heard that it was nowhere near as good as Train and so my expectations were measured. I hoped it would at least be as good as Seoul Station and so was pleased to discover this was actually a whole lot better than that.

It is four years since a biological agent leaked out of a factory in South Korea, turning those it infected into mindless zombies. There were attempts to evacuate the country but in the end these plans were abandoned and the whole peninsula sealed off from the outside world. Jung Seok (Dong-won Gang) was a soldier who was one of the last to escape, and who has been living as a refugee in Hong Kong ever since. Him and other survivors are treated badly by the locals who see them as unclean and so when he is given an opportunity by a local crime boss to make some money, he realises to ever get any respect he will have to agree. Jung and a small group of survivors are tasked with heading back to South Korea in order to collect a truck laden with money that had been abandoned there during the initial evacuation. Each of the group are promised a cut of the money upon their return back. Despite the undead roving the city they are taken to, things seem to be going well, that is until they come under attack from a rogue militia unit, the 631. This unit got stranded in the city during the evacuation and in the intervening years have formed themselves into a gang of bandits preying on the weak. 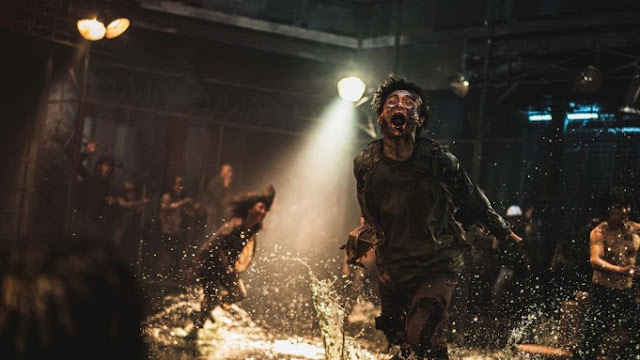 I feared this would simply be an inferior retread of the first movie's urgent escape storyline, and while the story can be said to be generic all the pieces worked together in a satisfying way. The characters this time around were not as overly likeable as in the first film but there were some great highlights. Previously it was about a man trying to protect his daughter, and children again play a big part in the film here. Separated from his team Jung soon joins up with a small family who include among them a young teenager and her younger sister who have adapted very well to the new world. Especially the teen who turns out to be demonically good at driving. The story turns into a plot to infiltrate the HQ of the 631 and steal back the truck and make it to a contact point at the port. Meanwhile at the HQ itself we are introduced to a variety of characters, including Sergeant Hwang (Min-Jae Kim) who serves as the film's antagonist. He reminded me heavily of Captain Rhodes from Day of the Dead, with bits of Negan from The Walking Dead to him. He made for a fun bad guy who it was nice to see wasn't a coward, holding his own when need be.

With the focus much more on human enemies the zombies take a back seat, much of the film has them as cannon fodder background creatures who are used by the humans as weapons and obstacles, but who are never brought into the limelight like in the first movie. It was great to see the return of their awkward painful looking movements. When they stand up it seems almost like they are a marionette, jerked upwards at unnatural angles. The way they constantly run into obstacles and get all bunched up in bottlenecks made them feel just as unique as the first time around. Despite their secondary role in this sequel there are still seemingly thousands of them over the course of the film, something I can never complain about. The story tries to hug on the heartstrings of the viewer and this was often fine enough, sometimes it felt like the undead all paused their attacks for the sake of more plot development that had me questioning at times how convenient this felt. 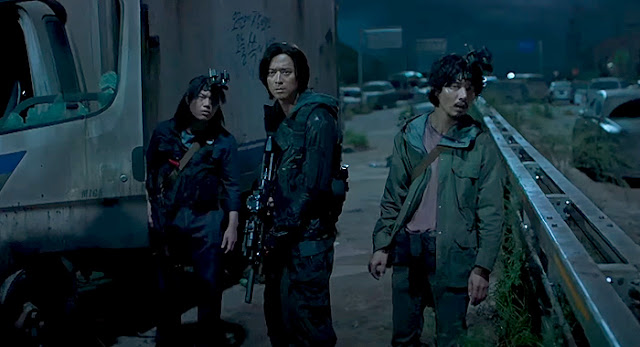 A lot of the most exciting parts of Peninsula come from the stand out car chase set-pieces. I have read criticisms that this felt more like a Fast and the Furious movie than a zombie one but I found the inclusion of these parts to be the real highlights. They were ridiculously exciting and thrilling, especially in the third act in which the film almost turns into Mad Max: Fury Road with a long protracted chase featuring multiple vehicles. This was by far the most exciting and crazy car chase I have ever seen in a zombie movie, it was stunning. Sadly that isn't to say it always looked stunning. In particular these sections suffer from some truly bad looking CG both from vehicles that don't look quite right, to the zombies who again don't look very real. It wasn't enough to ever detract from my experience but I have to admit on occasion it almost did.

I went into Peninsula hoping against hope it would be a decent sequel. Battle Royale II: Requiem was a prime example of a stunning movie that was followed up with something that was absolute rubbish. Thankfully I loved my time with Peninsula. It doesn't capture the same magic second time around, but few films ever do. Instead, while inferior to that one this was still a great zombie movie which I can easily see myself returning to in the future.