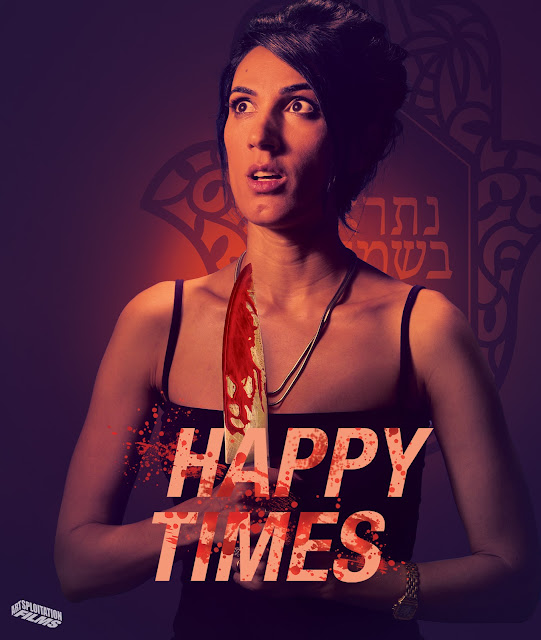 The Michael Mayer directed and co-written horror comedy Happy Times takes the concept of a family gathering gone wrong and ramps everything up to eleven. It is funny, farcical, but also bloody with a feel of comedy slapstick with real world consequences.

A Jewish family are having a Shabbat dinner at the mansion of Sigal (Liraz Chamami) and her husband Yossi (Ido Mor - Iron Man) in the Hollywood Hills. It is a typical set-up of various family members all holding their own grudges and grievances with each other. Over the course of the meal things start to escalate until finally with the onset of violence the dysfunctional group implode and over the course of a few hours tear themselves apart.

Families having terrible gatherings has been done so many times in all manner of genre types over the years. Here the mix of humour and horror works well. This may be a comedy, and is indeed laugh out loud funny at times, but Happy Times doesn't shy away from showing some quite brutal looking scenes. An overall criticism I guess is that this is a one trick pony when it comes to the flow of the movie. Once this settles into a rhythm it stays there all the way to its inevitable conclusion. The moment to moment action though remained engaging throughout, seeing the various family members forming shaky alliances with each other and it never being exactly clear which character is going to end up as the next victim.

Split over six or seven chapters things start innocuously enough, so much so that in the film's first act I did wonder if the stakes would be low throughout. There was a natural feeling ramping up of peril and danger though and it gets to a point where everything has gone too far, but by a series of steps along the way this progression felt appropriate rather then forced. The special effects are one of the highlights of Happy Times, some of what happens occurs just off screen, but there are also plenty of parts that are shown with plenty of blood used. I can't really go into the events that happen but by the end of the film there has been a high body count with each death standing out in a different way. Some are accidental, some are purposeful but all are unique to each other. 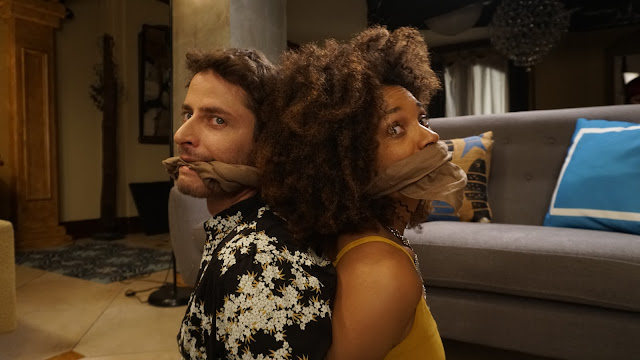 The majority of the film is in Hebrew with subtitles and sometimes the subtitles didn't seem to exactly match up, but it worked, especially with the addition of the character Aliyah (Stéfi Celma) who doesn't know the language so various family members translate for her. This leads to some of the films humour with big arguments in Hebrew then described to the girl as nothing major. I may not have understood what the characters were saying but they all seemed to be well cast. You shouldn't expect realism in how they act, this is a comedy after all, and one which relies on violent slapstick and a lot of farce which occasionally starts to feel a little exhausting. I liked the general vibe of everyone happily getting caught up in the insanity rather than trying to fight against it. This was a good looking film and the directing of the chaotic story was also a high point.

Happy Times was a finely crafted comedy horror with a nice mix of despicable character types and a story that never paused for breath. It loses some points just for being such a familiar concept (off the top of my head The Invitation and You're Next spring to mind) but other than that there really wasn't much wrong with this. Happy Times comes to DVD, Blu-ray and VOD on 2nd February from Artsploitation Films.