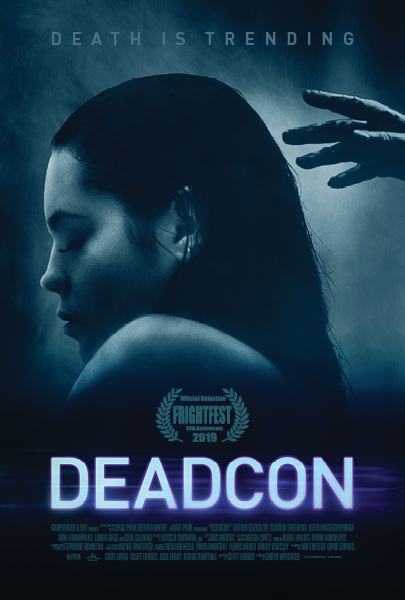 Deadcon has an average IMDB rating of just 2.8/10 and while I think that is harsh I can understand why. This is a movie that has great ideas and terrible ideas in equal measure, as I was watching this I was also thinking about just what I would change and twist to let this seed of a good idea become something potentially quite special. This was directed by Caryn Waechter and written by Scotty Landes and general story is probably better than the other Landes written horror I have seen, Ma.

A huge meet and greet event is taking place at a large hotel, and so a whole host of social influencers have headed there for a weekend of meeting fans. One of these is Ashley (Lauren Elizabeth - Bad Night) who discovers her hotel room was double booked. Against the protests of other staff members the hotel manager decides to put her in the top floor penthouse suite, a room that has a bad history associated with it. Staying next door to her is another influencer, Megan (Claudia Sulewski - A Christmas Carol + Zombies) who is having an affair with online gaming star Dave (Keith Machekanyanga). All these characters soon come to learn there is something indeed wrong with this floor of the hotel, and it might have something to do with an incident involving a young boy named Bobby back in 1984... 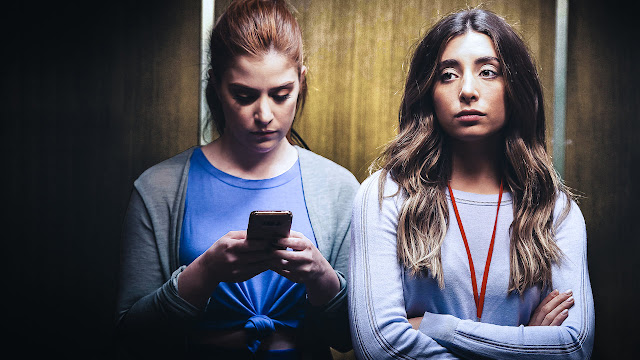 I enjoyed Deadcon a lot more than I thought I would but there were elements that frustrated and got in the way of what could have been a solid paranormal horror. First and foremost is the whole set up of the characters all being social influencers. I can only think this was decided to try and appeal to teens but this part of the film was a big waste of time. Absolutely nothing of note happens in the convention setting and mainly takes the form of a few montages of meet and greets and a bizarre and frequent cutaway scene of the same kids running up to the same doors and cherry-door knocking them (knocking and then running away before the door is answered). The ghost (not a spoiler as this is heavily insinuated in the prologue) seems to want attention and so that is the only thread that ties it to social influencers. Despite this these characters could have been anyone and could have been at that hotel for any reason. Much of the horror takes place within the hotel rooms of a handful of characters and so everything outside of this was meaningless and a waste of film.

The horror part of Deadcon is more successful, but even hear there is a lot of excess stuff going on that dilutes the overall story and just gets in the way. This has two main protagonists and these two characters have their own stories going on, they are united by being in haunted rooms, but other than a brief accidental meeting early on in the movie their storylines never really meet up again. Part of the story involves one of the characters getting possessed. I only mention this as that was one of the parts that just wasn't needed, there was much more effective horror occurring elsewhere that made the possession idea not needed, especially when it is hardly touched upon. The paranormal things happening were the best part of Deadcon, Bobby has some cool things going for him. Firstly, there are a few sequences that it turns out happened in 1984, I loved these parts as it made for a creepy vibe, an early computer that had what is essentially the first invented online chat room was cool enough. Mainly I liked that as it meant that Bobby's appearances often coincided with a sound of a modem. The scenes with this ghostly kid were the highlights, the kid is kept in shadows and managed to feel unsettling, and I loved what they did with the pink rabbit balloon that accompanies him., as did I love the very creepy whistling that proceeds the boy's arrival.
The carpets in the hotel gave me a strong feeling of The Shining and this is backed up by a staff member of the hotel who knows exactly what is happening and so has his own little sub-plot of trying to help the protagonists out. 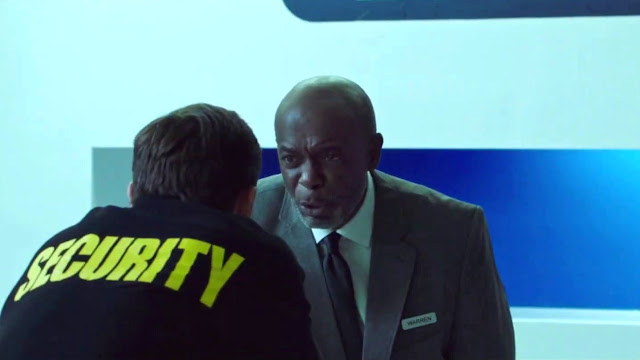 The characters aren't bad despite the awfulness of having to act like influencers. Ashley for instance is really depressed and sick of the lifestyle she's fallen into, Megan and Dave manage to both be likeable despite the bad things they are doing, Dave in particular was a character I liked more than I should have. It all suffers though due to the story feeling really unclear. I didn't get the intention of what the writer was going for. There were too many moving parts to have this feel satisfying. It's frustrating because there are good moments here, the film was genuinely unsettling when it was at its best, but at its worst there was a whole load of nothing happening. It's only into the films last fifteen minutes that the horror begins in earnest but felt like a little too late to make an impact.

Deadcon had its moments but was let down by what felt like a lack of focus. Get rid of the whole convention part of this, strip the horror a bit back to basics (such as removing the possession idea) and add in more of the effective 1984 based flashbacks and this could be a decent horror, as it stands though if you are planning on giving this a view be prepared to ride the rough with the smooth. Deadcon is currently streaming on Netflix.

Posted by Daniel Simmonds at 07:18