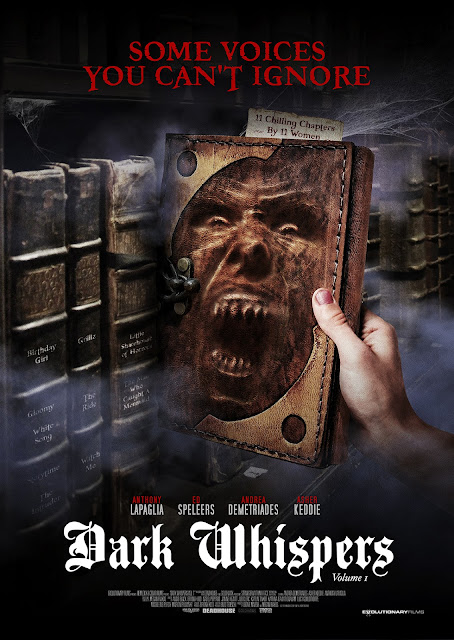 Any long time visitors to The Rotting Zombie will know that I have a real soft spot for anthologies. With Dark Whispers: Volume 1 you have one that is themed around short horror films directed by Australian female directors. I will add my own theme to this, the theme of shorts that seem to end kind of abruptly. That isn't to say they end badly, more that it feels like it cuts away before the story is properly told.

The Book of Dark Whispers is written and directed by Megan Riakos (Crushed) and is the wraparound story that is revisited after each of the ten shorts. Andrea Demetriades plays Clara, a woman who has inherited a strange book that used to belong to her mother. The book is full of strange stories and Clara is frightened  to discover that reading each story seems to result in a bit of it coming into the real world (reminded me of Jumanji). She becomes determined to finish the book. Much like many of the shorts here I enjoyed this, but I felt it wasn't satisfactorily resolved, it was cool how after each short film there is an element that then bleeds over into the real world. 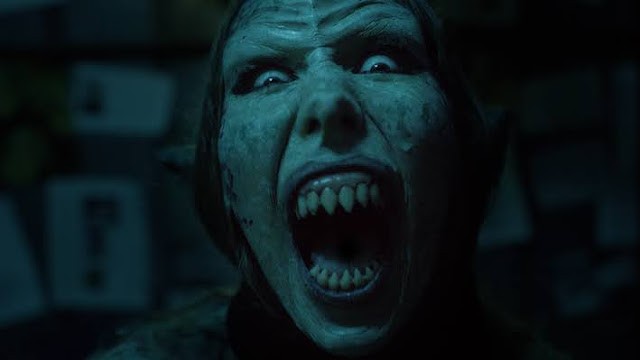 The first proper short is the Angie Black (The Five Provocations) directed 2008 film Birthday Girl. As an elevator descends a little girl questions her mother (Sarah Bollenberg) about what they did for each of her birthdays. I will be honest and say I didn't sleep well the night previous to watching this anthology, I got around three and a half hours sleep and so as an entry point to Dark Whispers I was groggy and didn't really get this one.
2016's The Man Who Caught a Mermaid followed this and was directed by Kaitlin Tinker in her directorial and writing debut. An old man (Roy Barker - Lone Wolf) ridiculed for his obsession with mermaids is delighted to one day capture one. This had almost no dialogue but told a story that had some unexpected twists to it. With good makeup effects, and a good story this was one of the better shorts in this anthology, let down (as become standard) by a weak ending that left the story open.
The third short was Gloomy Valentine and really was something different. This was a 2006 stop-motion film from Isabel Peppard (Butterflies), who directed and co-wrote this. A depressed girl in a Tim Burton esque world laments her lost love. This was a silent short that had a great soundtrack to it and really stood out for obvious reasons.

The fourth film was Watch Me by Briony Kidd. An attention seeking famous actress (Astrid Wells Cooper) lives in fear of being alone, and whether real or imagined it is isolation that causes the darkness to come calling. This had a good idea and one which felt like it had potential. I liked how open to interpretation it all was.
Jub Clerc's Storytime from 2005 featured next and told the myth of the 'Gooynbooyn Woman', a creature that comes from real life Nyul Nyul/Yamuru myths. Two children ignore the warnings of their elders and explore the Mangroves in search of this being. This one had good atmosphere to it and was darker than I at first expected.
The Ride (written and directed by Marion Pilowsky) was about a creepy man (Anthony Lapaglia) who picks up a student hitchhiker (Ed Speleers) and together they get caught up in a dark event. I've seen the general idea done in films before but it was still a compelling film that had a feeling of peril to it. This was actually filmed in England. maybe due to being tired I never picked up on this. 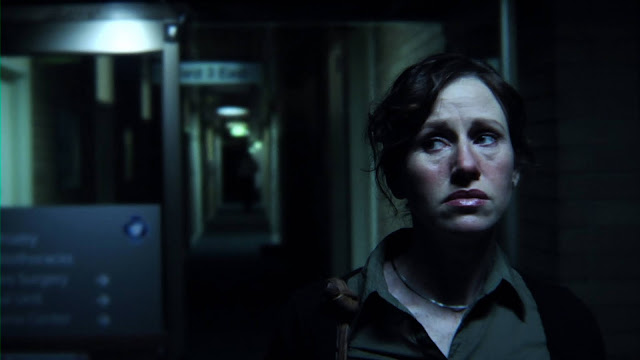 White Song was written and directed by Katrina Irawati Graham and was presented like a fable. It is based on the story of the Kuntil Anak which is a traditional Indonesian ghost of a woman who dies in childbirth. This was ok, but I found the way it was presented to be a bit light on thrills.
Grillz followed and was a vampire story with a twist to it. Filmed entirely in black and white and directed by Lucy Gouldthorpe this ended differently to what I expected.
Little Share House of Horrors was the penultimate film here and was about a girl who steals a special plant from a shop of curios. This had some fun special effects involving vines, and had a cool little montage sequence, but I didn't like how swiftly this finished.
Finally closing things out was Janine Hewitt's The Intruder. During a dark stormy night a woman (Asher Keddie) fears that an intruder is planning to break into her house. This not only had good atmosphere but managed to fit in a couple of good twists that I didn't expect. Perhaps the best of the shorts in this anthology.

Dark Whispers: Volume 1 was a decent anthology, I appreciated the amount of films stuffed into this one hour forty piece and even though I had issues with how nearly all of these shorts finished there still wasn't a single bad one among them. With a 'volume 1' in the title here's to hoping that a second volume one day gets released. Dark Whispers: Volume 1 launched today (25/01/21) in Australia and the UK on all major digital platforms.