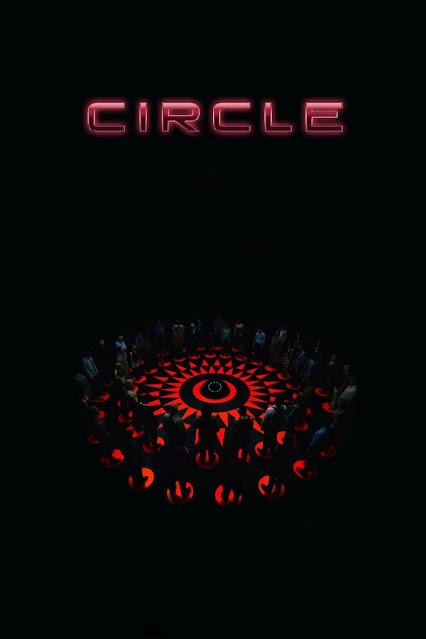 Circle has been on my Netflix queue for a while now so decided to check it out finally. It was co-directed and co-written by Aaron Hann and Mario Miscione who both worked on TV series The Vault and both seem to share some common similarities. There have been plenty of horror films that feature just the one mysterious location, it was only a few months back I reviewed The Odds which has a similar set-up. It dawned on me as I began watching Circle that a movie in which not a single character moves from the spot they are standing in could make for something quite difficult to review.

Fifty strangers awake in a dark room, each of them standing on a red glowing circle on the floor. Before too long they figure out that they are stuck inside of some sort of game, every few minutes they are supposed to vote on someone to get killed. This results in electricity shooting out an orb in the centre of the room and zapping the loser instantly dead. They come to the realisation that at the end of the game it is likely there will only be one survivor... 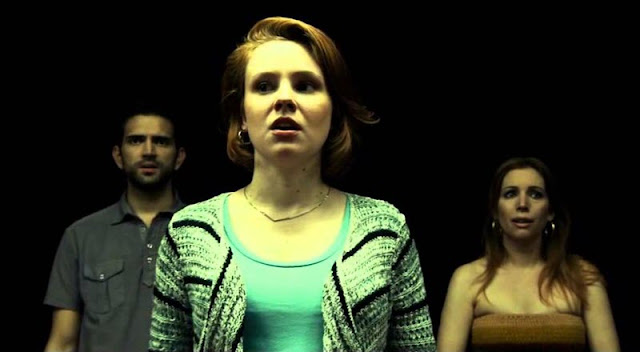 To put Circle in the worst light you could just say it was Cube but with all the action and excitement sucked out of it. These characters don't know how they got to be there, but a lot of mystery is removed by these characters all being on board to the idea that they have been abducted by aliens. This is explained very early on by one of the characters who remembers being part of a mass panic to flee a city when he was abducted. Whether that is true or not doesn't matter, the characters believe this and so it isn't a question of who has captured them, but more about guessing the motivations of the captors. Nearly the whole film takes place in the dark room, the only visibility being the red lit structure and the characters bathed in light. This brings the focus squarely onto the characters but did mean everything looked a bit samey.

The group are made up of diverse people, there is a pregnant lady (Allegra Masters), a young girl, various races and differing religious beliefs, business men, cops and soldiers. With the lack of ability for action (to leave the circle you stand on is to instantly die) the film becomes one long conversation from beginning to end with various people taking a leading role in trying to decide and convince who should die next. To begin with it is agreed that the oldest should die, but as the film plays out peoples prejudices come out, racism, sexism, homophobia and ageism all get revealed. This was one of the more weird ways the film flows. Each time a character with a nasty agenda gets put in the limelight it isn't long before they have had their comeuppance, yet there is always another bigot to take over. Surely they would realise that speaking their truth is only to get themselves killed. Such as the cop early on who suddenly goes into a most unwise racist spiel. It seemed a bit unbelievable that so many characters would turn nasty and not realise this would speed up their demise. I'm not keen on conflict in real life so having a film that centres around loud obnoxious people giving their truth and bullying others wasn't that fun. 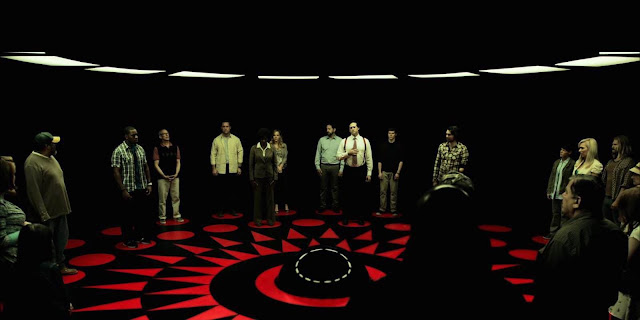 I was more interested to see what they would do with Circle than the film itself. Having such restricted movement for the actors meant it was the dialogue that had to hold things together. At times this felt like a concept to explore various topics in a way that sometimes felt preachy. Circle was a fine enough film but it was constrained by the very limits it set itself and so won't appeal to everyone, it is something that is better in theory than in execution. Circle is currently streaming on Netflix.

Posted by Daniel Simmonds at 01:43