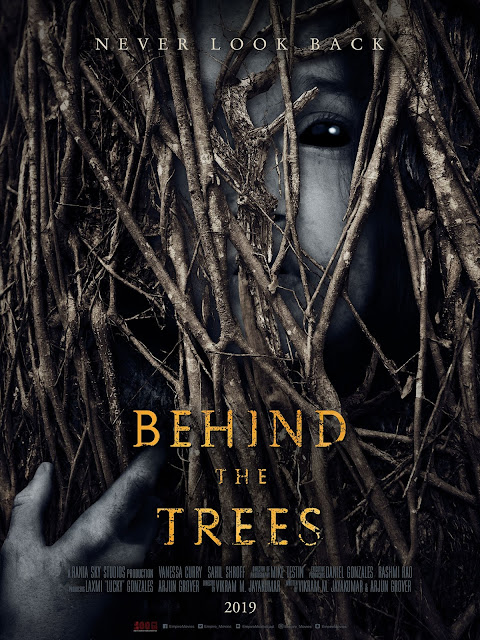 Behind the Trees is a horror directed and co-written by Vikram Jayakumar, that uses the concept of characters who are in a foreign location getting caught up in local customs which they don't have much understanding of. It was a bit of a slow burn but throughout this there were some suitably creepy moments, even if stripped to basics it doesn't really have much of a story to tell.

Amy (Vanessa Curry) and her Indian boyfriend Jay (Sahil Shroff) have gone away from their home in L.A for a romantic getaway to the Indian wilderness. The resort they are staying at is near a local village, and it is while they are out walking one day that they witness a strange exorcism the villagers are performing on a young girl (Tvisha Seema). This exorcism culminates in the villagers locking the girl in a purpose made chamber that resides in the middle of a vast cornfield. Fearing she has been left to die Amy and Jay secretly free her and bring her back to their apartment. The girl is in shock but slowly opens up to Amy, eventually revealing her name is Asha and that she just wants to go back to her parents. Things are not as straightforward as they first appear, and while Jay heads back to the village to try and find some answers Asha begins to talk about a strange woman who she says keeps appearing before her. 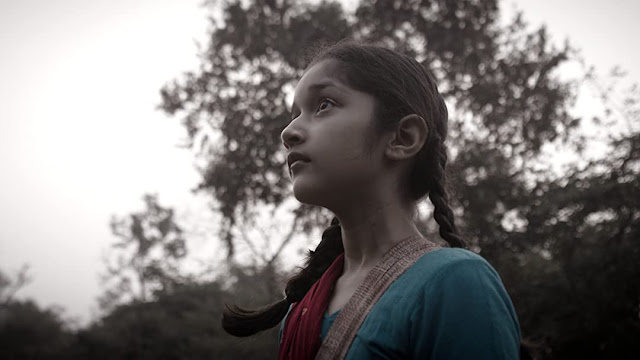 There is a lot that Behind the Trees gets right and the whole local superstition part of this was tremendous. Being in a strange place and not understanding what everyone else does can't help but create some unsettling feelings. Working as the bridge between these two worlds is Navin (Subrat Dutta) who works at the resort but comes from the nearby village. This bizarre and off kilter character was a highlight and he shares some of the best scenes. Ones such as when him and Jay are walking through some woods and he explains why he wears a creepy mask of a man on the back of his head while walking there (to confuse tigers is the answer). As to Amy and Jay, I never really felt a chemistry between these two people, it never felt believable that they were meant to be deeply in love. This is mostly down to the character of Amy who didn't really seem to have much depth to her. There was a slight feeling of a 'white saviour' with her, she decides she knows what is going on and puts no stock in local beliefs, determined to rescue the girl when no one had asked her to. Asha was purposely mysterious but avoids the typical creepy child vibe by not talking like she is an adult (which for some reason often happens in horrors). Her little stories about meeting a strange woman in the woods were effective, and these moments represented by possible flashbacks worked well.

The Indian setting led to some beautiful looking scenery, the remoteness lent itself well to the horror. This was a slow burn though but it has its moments where things begin to get a bit freaky. I loved the design of the strange woman, hard to describe but was like a half woman/half stick creature look to it, helped by always being covered in shadows and having just fleeting appearances. I did wish the horror had been more than what was provided. Thankfully to my memory there were no jump scares, so all the horror here was inserted well. It leads up to an appropriate ending, but one whose impact is lessened slightly by the mid credits epilogue. Both that and the vaguely related prologue were not needed, I felt the story worked perfectly fine without these parts. 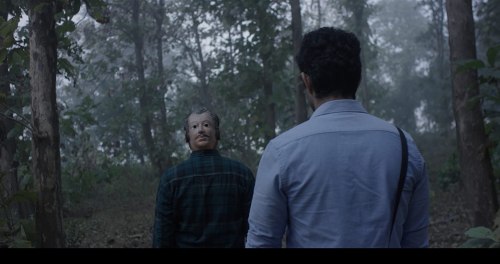 Behind the Trees had its good parts, such as a lovely setting, a few creepy moments and good creature design. It also had its weaknesses such as dull protagonists and a prologue and epilogue that were not needed. Behind the Trees is due out on 24th May from High Fliers Films.