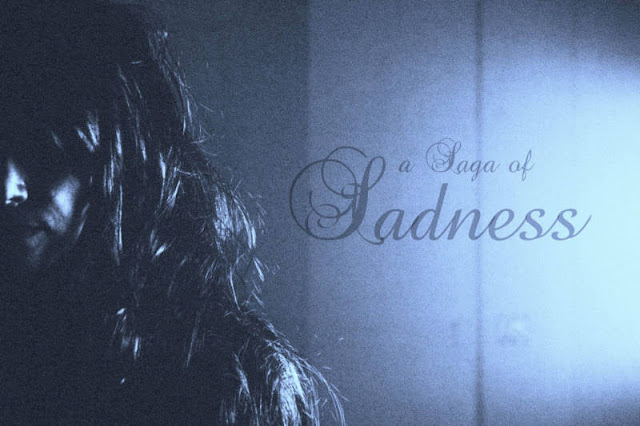 A Saga of Sadness is a short horror film from Jeff Payne and is made up of two different shorts he has created in his The Pale Faced Lady trilogy. To me he will be most fondly remembered for his part in the phenomenal short horror septeMber, and for his editing skills. This new short is made up of She Will Return and In Darkness I Wait, skipping out on the first film in the series. I can understand not including that one as it felt of a different style to the later entries.

This is split into two chapters. First chapter titled Sadness is the story of She Will Return. In this part a grieving father regrets his actions that led to his daughter (Rachel Taylor) killing herself quite violently with a sickle. Part two is titled Curse and follows the events of In Darkness I Wait in which the nephew of the father (Sam Love) arrives at the now abandoned house with his girlfriend (Hannah Swayze) in order to burn it down. Both these I had seen before so there is not much more to add other than Payne feels this is the most cohesive way to watch them.

Rather than simply pasting two different shorts together Payne reshot a few scenes, cleaned up the audio and made some adjustments to the overall film. This was done in such a way that I couldn't even tell there were reshot scenes. The best thing about A Saga of Sadness, and of the trilogy as a whole is Taylor as the ghostly lady. Ghosts are often inserted inconspicuously in the background of scenes and is just so darn effective. This figure is definitely creepy and the idea to have this person never ever move or change their expression was a genius one.

As for the combined larger short (clocking in at nearly thirty five minutes), I still found the In Darkness I Wait segment to be the most effective, and with flashbacks to the first chapter it still almost felt like that part wasn't needed. It's hard to get tired of the lovely editing and cinematography so at the least it's cool to get more of that. This ends on the same ending shot as the third short did, very thankful for that as it still remains one of my favourite endings to a short film I think I have ever seen.

If you have seen the original trilogy then maybe there isn't much call to rewatch what is essentially two films taped together. If you have yet to see them though this is the perfect way to do so. Stylistically and thematically the two shorts are very similar and so they fit together well. Check it out for yourself below.