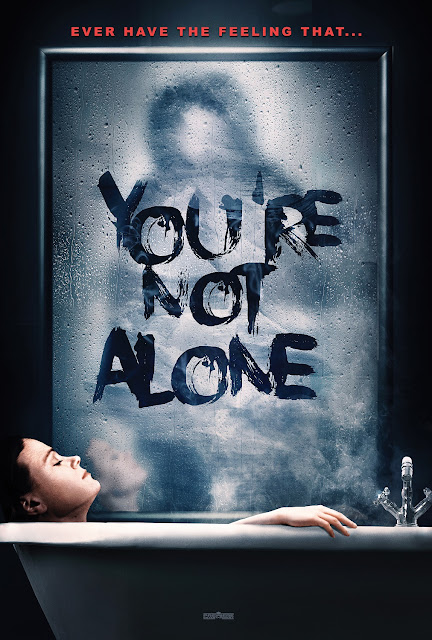 On the surface the Eduardo Rodriguez (Fright Night 2, Blood Cell) directed You're Not Alone is yet another horror that centres on a family who are being terrorised by a supernatural presence in their home. This falls further into genericness by having the horror focus around a little girl who may be hiding a dark secret. However, Andrew Wong's story (his feature film debut as a writer) is more clever than it at first seems, while the lead actors here all do pretty great jobs.

After the death of her father, young Isla (Leya Catlett - The Affair) moves in with her mother, Emma (Katia Winter - Sleepy Hollow TV show, Dexter). Emma hasn't had much to do with her daughters life due to suffering mental health problems, but now wants to make amends. However, the arrival of Isla brings with it a series of strange disturbances around the house they are living in. Objects seeming to move around on their own, the alarm system constantly tripping for no apparent reason, and Isla keeps seeing a shadowy figure around the house. Is there something supernatural going on, or is it maybe Emma's mental health problems coming back to haunt her? 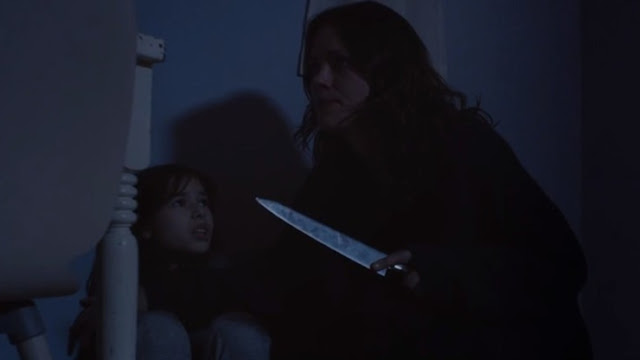 Within a short space of time I felt I knew what this film would be about, and it certainly isn't too original. It strays from feeling generic though, as even with having seen this type of story in plenty of other films I was invested mainly thanks to Winter's performance. Via flashbacks to a suicide attempt you get the knowledge that she is a woman with a troubled past. This affects her behaviour in the present, and also provides the notion that maybe what she is experiencing may all be in her head, especially when you factor in hallucinations of slit wrists, and nightmares about similar things. With children in horrors there is always the danger of making them come across as too mature for their young age, something I always find creepy when that isn't the intended effect. For the most part Catlett does a good job, her character is quite quiet which may help her never becoming irritating, but the script on occasion does give her lines that made her sound far more grown up than she should appear. There are a host of side characters, the best of which are Emma's ex boyfriend Mark (Zach Avery - Fury) who carries with him an air of menace, and Emma's best friend, Ashley (Emmy James - Can't Take It Back) who shines despite not getting much screen time with which to make an impact.

The nature of the horror in You're Not Alone means that events happen but are rarely witnessed, even with the introduction of CCTV around the house this remains so. There was a body count here which was something I didn't expect, characters often yanked off camera in a style that reminded me of Paranormal Activity, but despite the lack of on screen death these scenes were effective with how sudden they occur. The first two acts were kind of slow going, there is a constant barrage of things happening, but they never really escalate into something far more dangerous until the fantastic third act. This third act is very bloody and gory and features some great looking trauma effects, especially one scene involving a kitchen knife. This third act features a neat twist which while not original still felt like a great direction for the movie to go in.

At nearly one hour forty minutes in length I felt some of the fat could have been trimmed, especially around the middle of the film. The whole church subplot for instance really didn't feel like it added a lot to the overall story. Still, while this was tame for much of the run time I still found myself interested in what was really going on. You're Not Alone is due for release on 22nd March 2021 thanks to High Fliers Films.