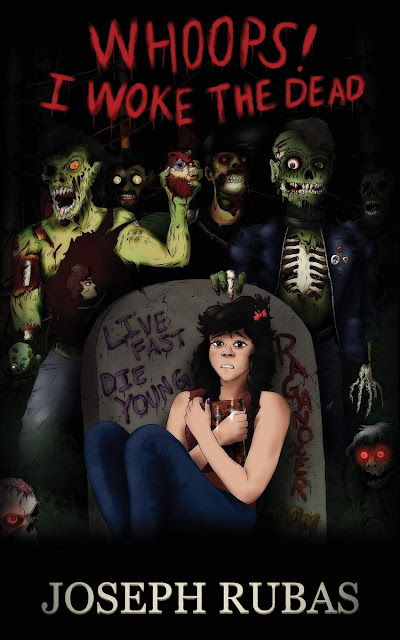 Whoops! I Woke the Dead is a 134 page zombie novella whose title indicates this isn't something that takes itself seriously. Written by Joseph Rubas, this is told from the perspective of the novella's main character; 16 year old Alex Warner. It includes various references to other horror media and despite featuring the undead is written in a tame way, which works with the humour displayed.

Alex loves horror and so her favourite holiday is Halloween. After the Halloween party she was meant to be attending with her cousin and their boyfriends gets cancelled she convinces her friends to instead head to a cemetery and read from a spooky old book she found during her volunteer work at a library. This doesn't turn out to be the wisest move as the words she reads from the book has the unintended effect of raising the dead from their graves. Now Alex has to find a way to undo the trouble she's caused or being grounded will be the least of her worries.

I didn't like the protagonist of this story, I found Alex to be far too arrogant and unable to take proper responsibility for her actions. Being told from her perspective, and having a deep love of herself it is understandable why she paints herself as the coolest and best person alive but it doesn't endear her to the reader. Much better was the subplot involving a pizza cook named Langston who gets caught up in the unfolding zombie apocalypse. His whole character was a one trick pony (he has based his life on his idol Bruce Lee) yet his sections of the book were endlessly entertaining. Due to how one dimensional his character was I can fully see why he was a side character, but I came to really enjoy the parts involving him.

The zombies here are made much less threatening in that they not only retain all their memories of when they were alive, but they are fully aware of what they are and what they want. As a collective the undead share a cheeky sense of humour making some of their conversations amusing and giving them some of the more funny moments in the novella. There is plenty of fighting the ghouls but there is a total lack of blood, the undead far more like the dusty old corpses of Michael Jackson's Thriller than gory other equivalents. Also on the horror side of things is the old book that Alex has in her possession, said to be made of human skin, and with a talking face on the cover this was a stand in for the Necronomicon. It was a shame this didn't really become a character proper until the books third act.

Whoops! I Woke the Dead was a fun enough little story even if I didn't really think much of the characters here. The horror aspect took a while to make an appearance but despite this the zombie uprising part never felt rushed. The lack of any real peril fed into the friendly humour, and it was all well written with nice little easter eggs peppered throughout. Whoops! I Woke the Dead is out now.