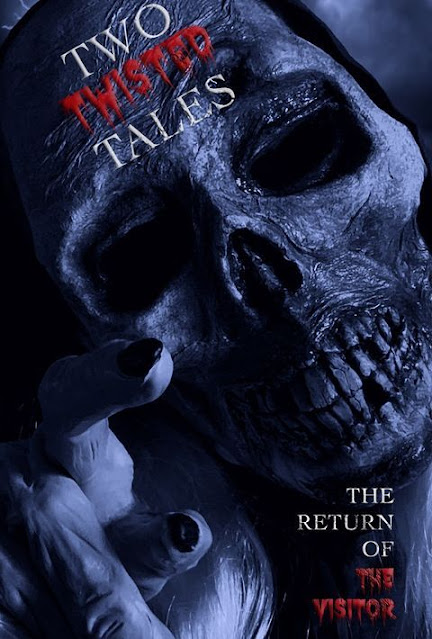 Two Twisted Tales is the latest short film from writer/director Nicholas Michael Jacobs (Genevieve Wreaks Havoc, Genevieve, Tales from Six Feet Under). Their are a couple of novel things going for it. Firstly, it is the first film I have received for review that is due for release in 2021, and secondly, despite being just three minutes in length this manages to cram two different stories into the run time.

This works both as a companion piece to the Genevieve short films, as well as a sequel of sorts to Tales from Six Feet Under. The Visitor (Jacobs) tells two different horror tales via an old cassette deck. The first is about the origins of a creepy doll. The second story is one about a widower (Alexis Beacher) whose online buying habits leads to her taking a chance on a mystery box.

It sounds like originally the plan was to make another entry in his killer doll series, but due to COVID-19 this wasn't possible. Still wanting to create something Jacob changed his plans into this brief anthology. He said that Two Twisted Tales was going for something with a different feel, both due to limited resources and due to wanting to try something new.

With the film relying on the narration of The Visitor the two tales felt more like ideas than fully fleshed out stories. The audio format does transform these into something more akin to a Creepy Pasta story, urban legends given form. The short length of these made for something that was very watchable, sure it would have been nice to get a lot more from these two stories, but as a taster it satisfied. It will be interesting to see if this is the start of a new series for this indie director. Two Twisted Tales is due for release on 1st January 2021 on Amazon Prime Video.