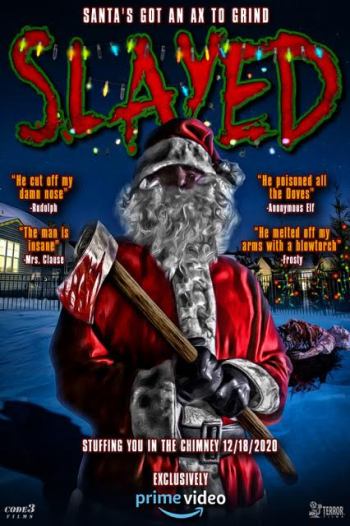 It is that time of the year again when everything is cheery (aside from damn Covid) and the world is full of psychos dressed as Santa going around butchering people, and so comes Slayed. Co-directed by Jim Klock (Red Letters, 6.66PM) and Mike Capozzi (Eye of the Storm) who both also co-star, this Christmas horror acts as a sequel to a story that took place within the film world, but not as a sequel to an actual film.

It is Christmas eve, five years since a killer dressed up as Santa Claus abducted and butchered a bunch of young women at a water treatment plant on Christmas day, before vanishing. Crandle (Capozzi), a guard at the soon to be condemned plant has more reason than most to be wary of the killer's return. He was the sole survivor of the massacre and has been preparing ever since for the reemergence. This evening he is joined by Jordan (Klock), a new security guard covering the shift of a co-worker who didn't show. With reports of abductions in the nearby town matching the M.O of the killer, Crandle is more certain than ever that tonight is when he will finally get a chance to get revenge. 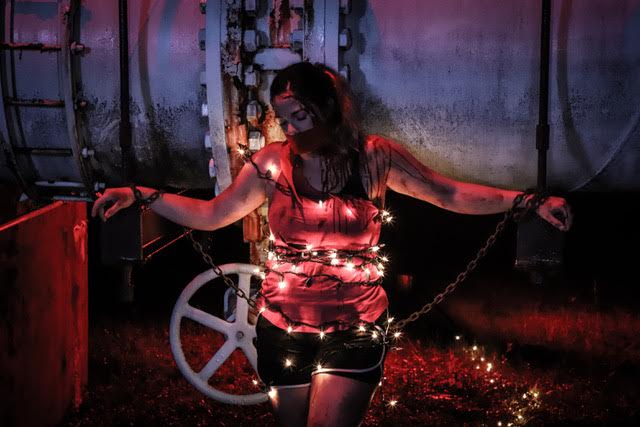 The fact that Christmas horror films are prolific enough to earn them their own subgenre of horror is a great thing. Slayed comfortably fits in here with the offices of the plant adorned with all manner of fairy lights and festive decorations, and the lighting for much of the film flitting between green and reds. Add in a Santa themed slasher and it is all sorts of fun, which even with the indie budget still works quite well. The killer is rarely seen, often appearing for a few moments, this even applies to the kills and abductions with nearly all occurring off screen. While this made a lot of the run time less exciting than it otherwise would be we are treated to a montage of sorts towards the end which revisit these kills. The method of killing isn't festive themed sadly, knifes, axes, and even an arrow are still fun to watch, and involves plenty of thick looking blood. The slasher remains mute throughout aside from a suitably creepy monotone 'ho ho ho' it makes.

Away from the Santa slayer there are four main characters, Crandle and Jordan are joined by site manager Nicole (Coel Mahal) and an escaped hostage of the killer, Heather (Kyra Kennedy - Red Letters). This horror relies a lot on the tropes of characters constantly finding reasons to split up, much of the minute to minute story has these characters teaming up and splitting away at a dizzying rate. Crandle is obsessed with stopping the killer himself and is so focussed on that, that he has no intention of trying to escape. Jordan on the other hand is split between wanting to help Heather escape and his natural inclination to be a good person, and so keeps leaving her to go help Crandle out. Poor Heather just wants to flee the area so you have to kind of feel sorry for her! Despite the story floundering a bit in the middle I was still invested in seeing how this would play out, and the inevitable reveal of just who the slasher would turn out to be. When it does occur I felt Slayed lost a little of its momentum, the killer's long winded explanation for their motives ate up a lot of the third act, as fun as it was for this character to show their twisted personality. I have to mention, the inclusion of a 2020 joke here was a great addition and was perfectly placed. 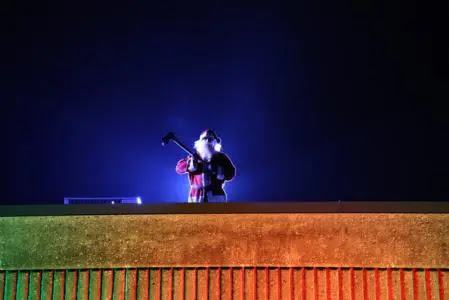 While the film is obviously an indie production, the small scope of the story meant it could be told relatively well, with believable elements to explain the small cast. Via flashbacks and environmental details the backstory is well explained, while the true motivations of the characters, and the barely seen Santa means you are often left guessing as to who the real antagonist is. All in all this was an enjoyable slice of Christmas horror which at seventy five minutes avoided outstaying (outslaying?) its welcome. Slayed was released exclusively on Amazon Prime on December 18th thanks to Terror Films.