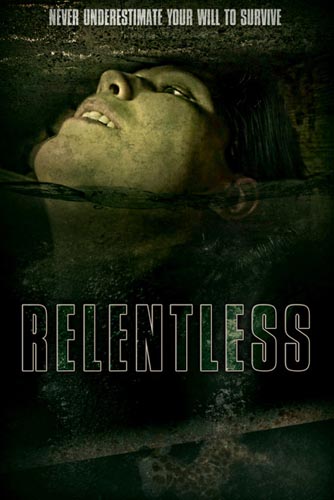 Relentless isn't much of a horror, but it straddles the line between drama and survival, while leaving the sole protagonist in a perilous and scary situation. This could be seen as an indie version of Crawl, but with less alligators and less going on. This lack of adventure means Relentless can be far more introspective, with the whole set-up a metaphor for the inner turmoil of the main character.

Jennifer (Rachel Weber - Link) is home alone, with obvious signs of having recently had some sort of accident due to her leg being in a large brace. She carries with her a sense of melancholy, and as she potters around the house there are clues revealed as to what has made her life so lifeless and empty. It is when she is putting a box in the basement that the real world melds together with her inner one, the basement door jams shut trapping her inside. A storm is in full force outside and has led to water leaking into the basement. Initially Jennifer use her imprisonment to delve deep into her bitter memories, but as things get more and more desperate she is forced to take action. 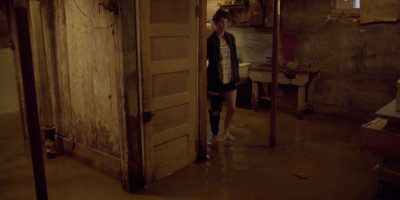 Relentless is a bit of a strange title seeing as how things here don't really get moving until there is but fifteen minutes left of the roughly seventy five minute run time. The action was so late in happening that I began to suspect it never would. On paper having a sole character trapped in a basement not really doing anything for an hour should be dull, but the way the film drips information to the viewer made her journey much more interesting than it should have any right to be. This is a sad movie with a sad protagonist and while the things the character has experienced were alien to me I still felt for her situation. In part this was due to the sombre piano led score, in part to the story told, and in part to Weber, whose portrayal of a woman in a deep depression was, I felt, a good one. The character is on her own for much of the film and so rather than fill the air with talking to herself she is mute throughout. This made the story get told in a far more visual way than would be typically done. The music used is key in bringing the sad feelings, but it never over shadows what is going on, it compliments it.

The story is mainly carried by a variety of short flashback sequences which never distract from the main plot going on. These mainly take the form of an ill fated baby shower, as well as Jennifer interacting with family members such as her parents, and her beloved sister, Leah (Anna Hickey). The biggest comparisons with Crawl is obvious being trapped in a rapidly flooding basement, but there are also the elements that have characters in both films having to deal with their past, and the convenient flashback to display how past experiences may directly influence their chance of survival in the present. I was going to say how it felt like the boxes of memories in the basement getting flooded was like a metaphor for Jennifer needing to move on from her grief, but the director/writer himself (Barry Andersson - Edge of Insanity) also stated something similar and so I didn't want to seem like I was parroting him. With the story not escalating until the short final act I was wondering how this would manage to resolve everything in time. It does so in a way that I thought was pretty cool. There is no cheesy last minute rescue, instead it is a more insular declaration that at least metaphorically saves the day...or doesn't, depending on your outlook. 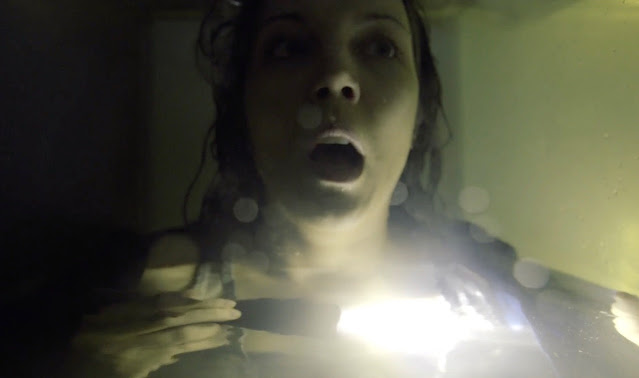 The cinematography and directing was never anything less than sublime here, and some strong images stuck with me, such as Jennifer laying on a floating table shown via an overhead shot, or her early desperate attempts to undo the latch trapping her in the basement, as a Black Christmas style shot of her eye peering through the hole in the wall completes the picture.

Horror is so good as it is such a great form of escapism. No matter what real world troubles are going on they rarely match the awful situations characters in those films find themselves in. With Relentless you have a horror that is much easier to identify with, everyone has gone through loss and so it is easy to put yourself in the headspace of a character suffering that. This film may be far more grounded in reality than something like Crawl, but the way the story is told won me over. Relentless released on multiple Digital platforms on November 27th thanks to Terror Films.