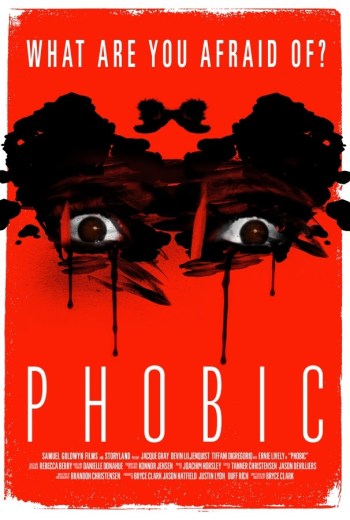 On paper, Bryce Clark's Phobic sounded like it would be a fun horror. I imagined the entertaining Irrational Fear but in a crime thriller setting, maybe Se7en with phobias instead of the seven deadly sins. Instead what we got was a surprisingly dull movie whose story goes off the deep end by the film's conclusion.

Riley (Jacque Gray - The Night Clerk) is a homicide detective who has recently returned to active duty after being abducted and tortured by an unknown assailant. She is partnered up with Paul (Devin Lijenquist) and together they start investigating crime scenes that appear to be the work of a serial killer who forces his victims to confront their deepest fears before they die. The duo soon realise all the victims were the patients of Elizabeth Holden (Tiffani DiGregorio - Halloween H20: 20 Years Later), and that an incident in Riley's past might have her linked to the events in some way. 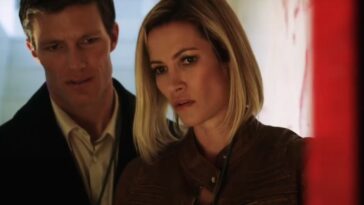 The crime investigation part of Phobic I was up for, but right away there was something a little bland about things. It felt similar to Se7en in that nearly the majority of the movie takes place at night, in a vast cold city, with characters are all super serious and committed to their work. The first act, with the two detectives investigating crime scenes were not bad, but it is later events that made this film more bizarre than interesting. It leads up to a third act twist that felt far removed from the relative realistic investigation going on up to that point. It was abrasive to me, mainly with a protagonist I had been following the whole film suddenly acting like someone very different, with definite vibes of Unbreakable/Split to it. Even before this the story didn't do enough to grip, and the eventual reveal of who this serial killer actually was managed to also be underwhelming. Sure, the identity was a surprise, but with all the characters they could have gone with this choice wasn't one I would have picked.

By keeping things so serious it was hard to really enjoy any of the characters here. Riley and Paul in particular are so monotone and unexciting that their investigation seemed to lack any punch. Both characters are given backstory to make them seem more realistic but the dour mood of Phobic permeated through all of this. With Riley there is a long flashback from her childhood when she went missing (in the most likeliest of places), with Paul his flashback is told by him recalling a key event in his life. I admit to finding my mind drifting off to other topics at several points while watching this, though whenever I put myself back into the movie I never felt like I had missed much. To be fair, the moody atmosphere conjured here is consistent (up until the epilogue at least), there is a unified look over all the various locations that appear in Phobic. While this felt a little dull it was still an easy film to get through, the lack of much happening was a bit peaceful.

The influences behind Phobic can easily be seen, but this thriller never achieves the same heights which is a shame. The general idea was perfectly fine, I felt it just needed more charismatic characters to really make this work effectively. Phobic was released on 15th December digitally thanks to Samuel Goldwyn Films.