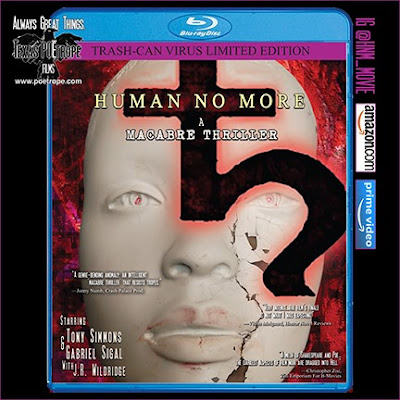 Oh boy, Human No More is one of the more difficult films I have been sent to review for a good while. I kind of had a sinking feeling while watching this that a lot of the themes and story here went over my head by quite a large margin. I fear this review will be as easy to write as remembering all the details of a crazed dream would be. My synopsis and likely other details provided will be the product of my interpretation, likely wrong, but is my springboard into trying to talk about this in a cohesive manner.

Human No More was written and directed by Christopher Alan Broadstone and has a slight anthology feel to it. This is fitting as it features within its two hour run time three different short films, Scream for Me (2000), My Skin! (2002), and Human No More (2004). These segments have appeared in different anthologies over the years, but here they are brought together, helped with actors from the main story also playing parts in those three stories.
Tony Simmons mainly plays Det. Nemo, a hard boiled detective with a jaded outlook on life. He has gone to a unique club where he drinks and smokes while thinking about a strange case he had, tracking a serial killer that came to be known as the Mirror Murders Killer (Gabriel Sigal). Whether this place is real, or if Simmons has dived deep into his own 'mind palace' is never made clear, but here he encounters the killer who provides a long essay into the pointlessness of existence.

While the three short films here would indicate this to be an anthology there is so much of the rest of the movie that these felt more like little side stories. My Skin! is the first of these side stories and reminded me a lot of the TV show sequences in the Max Payne video games. In this one a man thinking he has gotten away with the perfect crime is horrified to find that someone with almost supernatural power (also Simmons) is Hell bent on dismantling the perfectness of the crime to grant a dead woman retribution from beyond the grave.
In Scream for Me two serial killers (played by Simmons and Sigal) happen to converge on the house of a young woman on the same ill fated night.
Finally, the Human No More segment featured the same detective character, I believe this one was towards the film's conclusion, it sheds more light on what made this character so bleak and jaded. 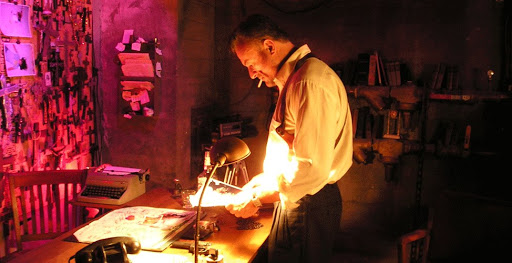 With a two hour run time I figured this would be quite an experimental movie and I was right in my assumption. Generally there seems to be two types of experimental films, those that have a kinetic wild editing style, and those that feature long drawn out shots that allow the atmosphere to soak in. This falls into the later category, which can be seen immediately with the first five minutes that include a close up of a mannequins head, and then a conversation between Nemo and the killer that is shown via extreme close ups of the two characters mouths. Much of the film is talking, around 70% takes place in this one room full of mannequins, the two characters existing together, but Sigal's one doing much of the talking. I couldn't help but pick up traces of the DC comic book villain, The Joker with how he speaks, how much delight he gets in getting to explain his ideologies. Nemo is a stereotypical film noir style detective, but that is not a complaint, I loved how into this vibe his character was, from the fedora and trench coat, to the moody black and white images of him walking down smoky alleyways.

I had feared the long run time would lead to boredom and as I wrestled with the story, attempting to decipher meaning out of the monologues and motives I did begin to get a bit tired towards the end. On the other hand though I think Human No More may have the most perfectly cast collection of actors in recent memory. There may not be too many of them, and it may even have the main two playing multiple roles but the actors here were fantastic. Simmons especially, the three characters he plays all felt so completely different to each other that I didn't even realise they were played by the same person. I loved all these characters, they had genuine 'character' to them. The same can be said with Sigal's ones. Both these actors are playing larger than life, unbelievable people who in a real world setting would feel out of place, but here in the half dream world they inhabit their large personas fitted in supremely well.

I seem to say it a lot when reviewing films, but Human No More really was something different. The long run time coupled with what is a very 'talky' film may put some off, and even to me who enjoyed watching this I would have been happy for the credits to roll about ten to fifteen minutes before they did. The story here is more of a template to explore philosophical ideas, and I readily admit to not having much of a clue what was going on. This unique film noir/thriller/play was full of interesting camera shots, the directing made even the most simple scenes visually interesting, and this had a great cast. Human No More is out now, check here for some details on where to find it, both digitally, and on Blu-ray.