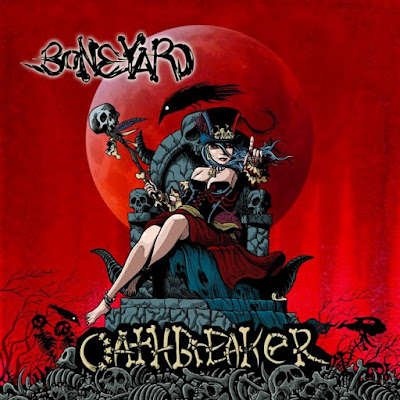 I currently have 65 emails sitting in the news section of my inbox, inundated with news at the moment. This is no bad thing, but does mean some items dating back to the middle of October are reaching their 'sell by' date. It's about time for my monthly news, so I have decided to remove the music news into its own post.

Cassetter's horror track 'Slasher' has gotten a Cyberpunk remix from Extra Terra. The song has been infused with 'grim, futuristic edge spiked with hints of Extra Terra's dubstep style. The remix is out now on all platforms, from FiXT Neon.
FiXT have recently signed Void Chapter. This project comes from Otto Cate, Adam Fielding and Brian Skeel and is said to 'deliver an exhilarating audio journey through dystopian sci-fi worlds'. They have released two full-length instrumental albums, The Sprawl and The Uprising with new vocal based material dropping in 2021.

Canadian hard rock/heavy metal band Boneyard released their new album, Oathbreaker on October 24th. The band are led by vocalist/guitarist/songwriter Pamtera and includes members from previous bands Tyrant, Septimus and Powerslave. Initially they were a cover band but have been creating original music for the past three years. For more information check out their website.
Boston, MA rock band Above Snakes have released a new single, Never Alone, and to go with it is a zombie based animated visualiser. Singer, Johnny Skulls (great name) says the song is about "living a chaotic lifestyle...and just when you're at your worst, that special force pulls you back into reality giving you a new lifeline". The music video for the track released on November 13th.
Ethereal Darkwave duo The Palace of Tears have revealed their new album, Of Ruination. This album features seven tracks 'of somber beauty and otherworldly seduction'. It contains themes of love, death and 'the search for truth in a world filled with grief and the longing for connection'. The track listing is as follows, Terra Ephemera, Thy Womb Full of Black Nectar, Masque L'Intrigue, Tears of the Moon, Cold Dead Skin, Shadows Of Whispering Phantoms, and Of Ruination. It is out now digitally, with a limited CD edition to follow.
Following on from her last single The Day I Died comes Gothic singer, Elle Noir's new song, Like A Black Doll. This is the title track from her upcoming EP. She says the song is about "a traumatic situation of my childhood, which I do not talk about but have been able to elaborate on over the years thanks to music."
Dark Rock artist Sharone has released a second song off her upcoming LP, Morbid Illusion. The track, Fade Away is described as her empowerment anthem and features a video about a wounded warrior confronting death.
Now, Dungeon Synth is a subgenre of music I have never heard of before, but US based Sombre Arcane fit into that apparently. They have recently released a video for their new track, Ancestral Seat Of The Barovian Scourge. The song was inspired by a Dungeons & Dragons module that the band have been playing together for 8 years. That is something to be respected, kinda jealous of that long game!
Another new music video, this time with Dawn of Ashes who have one for their song Sleep Paralysis. They use elements of HR Giger, Zdzislaw Bekinski and Clive Barker, with the video focusing on corruption, police brutality and human rights. This is taken off their new album The Antinomian that came out in July thanks to Artoffact Records.
I have more music news to share, but I will leave it here for the moment, happy listening and see you on the other side of the cassette tape. I say tape, as that is the best my car offers me when it comes to providing me music sources, thank God for smartphones!
Posted by Daniel Simmonds at 08:33