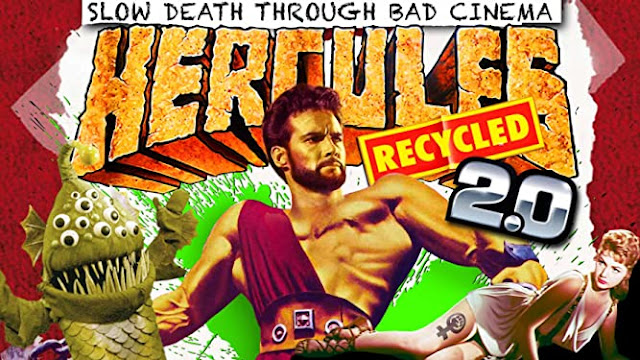 Hercules Recycled 2.0 is described as an 'insane, redubbed hybrid comedy/adventure set in a future where the power's run out and the world has collapsed into primal chaos'. It is stated that it was put together using nine old 'sword and sandal' movies to create a semi cohesive whole. The edited films have had additional work put on them, which includes 'two teenagers in togas, Eyezilla, a mercenary mariachi band, a space puppet, the kitchen sink (literally) and over 150 CGI effects'.

This was directed and co-written by Don Moriarty in his feature length directorial debut and the crazed story tells of a man in a chaotic future, former exercise show host Burt Galaxy who must seek out a lost energy formula that can restore civilisation.
Hercules Recycled 2.0 is out now and can be seen on Amazon Prime Video here.

Posted by Daniel Simmonds at 08:50