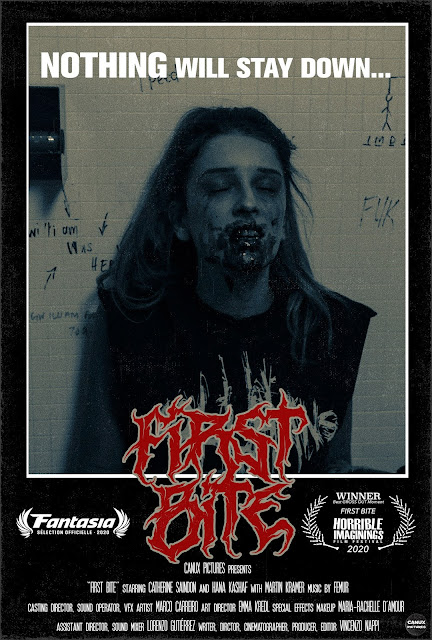 First Bite is an award winning six minute Canadian horror that was written and directed by Vincenzo Nappi (Filtered) and stars Catherine Saindon (Game of Death, Psycho Prom Queen). It's a grimy and dank short whose location of a trashy toilet features the sort of set decoration that wouldn't feel out of place in a Rob Zombie movie.

Alex (Saindon) is at a metal concert, but due to some kind of illness is locked away in a toilet puking up all manner of bodily fluids. Her friend Olivia (Hana Kashaf - Hysteria) is concerned but Alex assures her she is just really really hungry. Eventually she comes to the conclusion of just what type of food she is deeply craving...

Due to the pacing of this it felt like a scene taken out of a much larger movie, yet this slice works as a stand alone due to the self contained story within. The stand out part of this is the location, the angry metal music constantly in the background adds to the misery you feel the main character is experiencing. A lot of people have gotten too drunk at some point in their lives while out drinking, and have spent time being sick into a random toilet, and so while this is transported to a horror setting the set-up is relatable. Via clues provided to the viewer it soon becomes clear where this is all leading up to, so I won't spoil that surprise.

First Bite was an effective short that works on the build up with the resolution being the obvious way to finish things off. Due to a love of the particular genre covered I was left hungry for more, but regardless it was a fun little short.