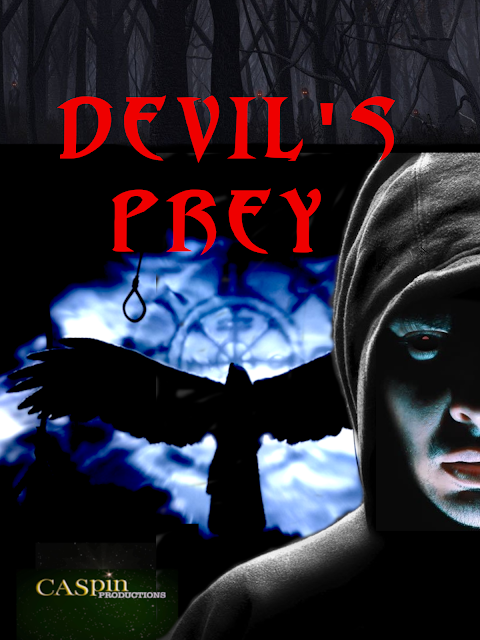 Devil's Prey is a supernatural horror that was written, directed and edited by Lincoln Casimir in his feature film debut for all those roles. It is a bit of a crazy film, to me it felt like an episode of CSI: Crime Scene Investigation on drugs. All the pieces are there to tell a logical and well meaning story, but it felt more overly produced than was needed, making for a dizzy and disorientating movie.

Larry (Paul C. Kelly - Driftwood) is a serial killer who targets children. A victim of sexual abuse as a child he sees himself as a victim and someone who is unable to fight against his urges. When a young girl goes missing, two detectives suspect Larry (the girl's next door neighbour) may be involved, but they have no proof. Meanwhile an angel of death, Luke (Adam Silverman) is caught up in a battle of wits with a demon, Roam (John K. Hart - Crown of Thorns), the former wanting Larry to redeem himself, the later wanting Larry to fully commit to the darkness so that he can take his soul away. 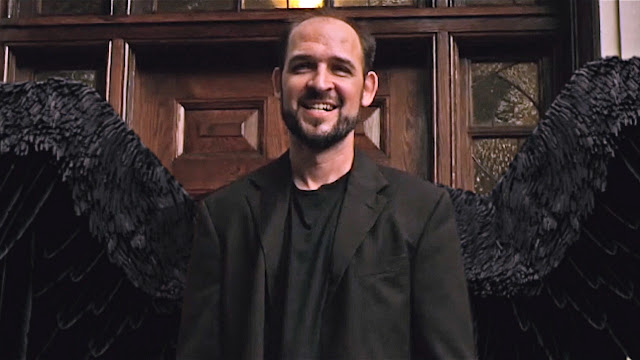 This was a crazed movie that never really pauses to take a breath. Within the first few minutes we are introduced to Luke who during a casual conversation happens to mention he is dead. We learn of a missing girl, and the detectives as well as the girl's parents immediately suspect Larry, who then casually (though making it seem like a joke) tells the detectives he molests children. We then spend the rest of the movie split between three chaotic storylines. The majority of the movie in a breath of fresh air follows Larry, who (likely) rapes and murders aside is a bit of a soft character. He has a sick mother in a nursing home, he has the abuse he suffered as a child, and he has constant dreams and visions of both Luke and Roam. He spends the movie flitting around from location to location speaking to people who act completely unsurprised that he is having visions of angels and demons.
The first subplot involves the two bumbling detectives, these swiftly end up relying on a local psychic to help them solve their case for them. Despite closely watching Larry they somehow miss him doing what he does worst, even when it is painfully obvious the man has secrets to hide.
The second subplot is where Devil's Prey is at its most bizarre. Here, Luke speaks to his superior on how best to save Larry's soul, and occasionally has a war of words with Roam.

These three different stories all kind of blur into one. Aside from Larry's interactions with Luke and Roam, the two detectives and Larry both end up meeting the same psychic. The world is so dizzying in part to how much editing is going on. The way events are shown made it feel like it was one of those sections in a slickly produced documentary where a cheesy recreation is shown. As characters speak there are disparate images used, such as gravestones, a sunset, drone shots of traffic. The camera never dwells on a single shot for long, instead there is a constant shuffling of images that becomes quite feverish. In part the problem with Devil's Prey begins immediately, we are thrown into the story with little context provided, as can be seen with the curve ball of Luke announcing he is dead. This is a world of black and white with nothing in between, there is no subtly with what characters say, they are matter of fact and to the point which creates a weird jarring effect where things seem almost farcical at points. Everything that is shown to the viewer is there to propel the viewer ever onward. This constant path means there is never time to breath, it is just storyline on top of storyline. 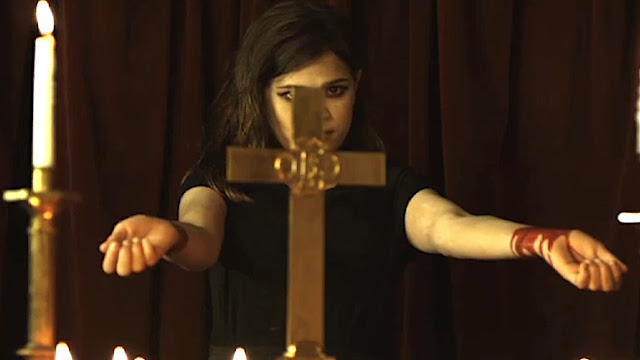 With the focus on Larry it is a good job that Kelly is one of the better actors heres, some of the more minor roles were averagely acted. At times with the way characters talk I thought this may have been dubbed over, the swift and earnest dialogue felt like actors were trying to fit their lines into small gaps of space. The film as a whole felt like a fever dream, which can be seen with the story itself. The girl being kidnapped felt it should have been the main draw, instead that is relegated to a subplot, with Larry himself off doing his own thing. He may have abducted the girl, but if he had he sure is too preoccupied to seemingly remember this fact. By the films conclusion all the subplots meet up for a finale as random as the rest, I particularly liked the fight Luke and Roam get into, so inconsequential that the camera leaves the scene midway through it.

Devil's Prey felt like a bit of a mess of a film. The storylines were not well developed, and no character here felt very realistic. One big plus about this though is that it was never boring, not in the slightest. There may be no room to breath, but there is also no time to get bored as scene after scene after scene is thrown on top of each other, chaotic and meandering. I may not think this was a particularly strong film but it did stand out, maybe something to watch as a curiosity. Devil's Prey is out now on Amazon Prime Video via Reel Nightmare Films and Together Magic Film Group.