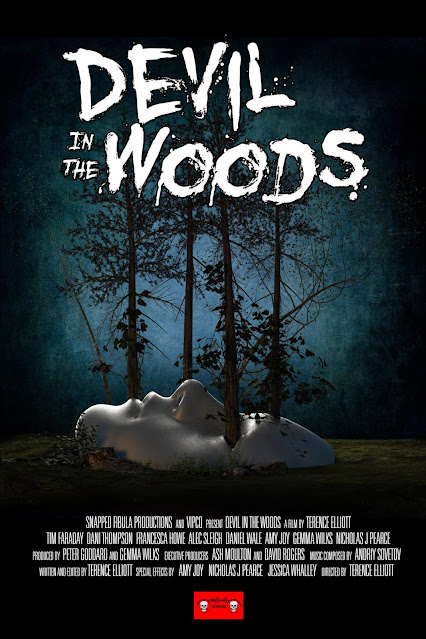 Devil in the Woods is a very indie English horror film written and directed by Terence Elliott (co-director of Harvest of the Dead: Halloween Night). Watching this was a comedy of errors for me as I spent the whole experience convinced I knew how this would play out, but my assumptions were very incorrect. Due to those self same assumptions I struggled to take much of what I was seeing seriously. 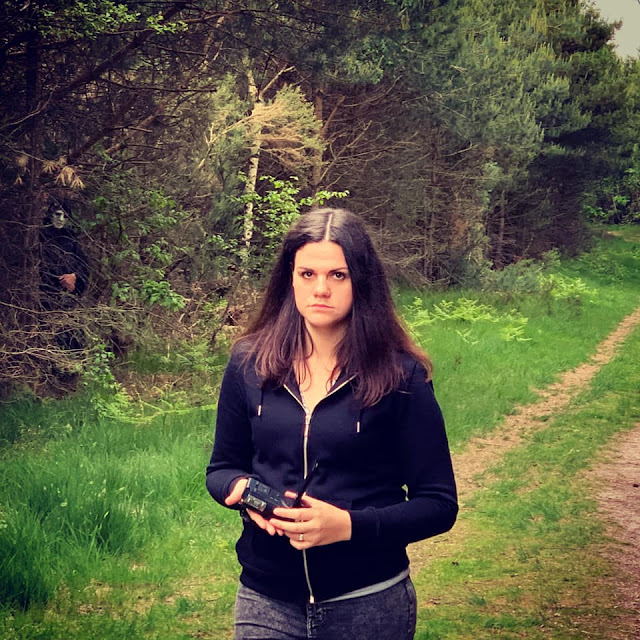 The film is 70 minutes long and features acting that while not terrible wasn't as high quality as you might see in other horrors. The performances in part led to my wrong thoughts about where the story would lead. The horror element appears in the films third act, with everything leading to this point mainly being the main story and a subplot involving two Police Officers. The filming a film within a film part of this helped show that maybe the acting isn't as bad as it initially appeared to be, as there is a very noticeable dip in quality when the characters are acting in the film they are creating. There are only a handful of locations used with the majority taking place in woodland, then an office for the officers, and rooms for two of the characters.

When the horror does arrive it becomes a lot more bloody than I imagined it to be, the blood was satisfying, and it all comes out of nowhere with no real clues earlier in the movie to suggest what was going to occur. In terms of genre tropes this had its fair share of generic ones. The worst culprit being when a character twists their ankle when running. I've never came across this happening in real life, so seeing it here made me roll my eyes more than anything. Also adding to that were some of the over the top reactions characters have to situations that don't appear to be as dangerous as they turn out to be. The story in general may have been a lot different to what I expected, but leads to some interesting suggestions. It did feel a bit like some of the story wasn't explained enough, cutting into credits when it felt like there were a few plot threads unresolved, maybe a sequel is anticipated?

Despite the indie feel of this jaunt into nature (the occasional rough sounding sound mix for instance) I enjoyed my time with the characters here, it helped that everyone was acting the same way and so there a feeling of unity amongst the cast. My biggest complaint is one that I realise is ridiculous as it was due to my own faults, but can't help but feel Devil in the Woods missed a trick by not leaning more into a fourth wall breaking/meta resolution. Devil in the Woods arrives on DVD and Blu-ray on January 8th from VIPCO.

Posted by Daniel Simmonds at 08:24