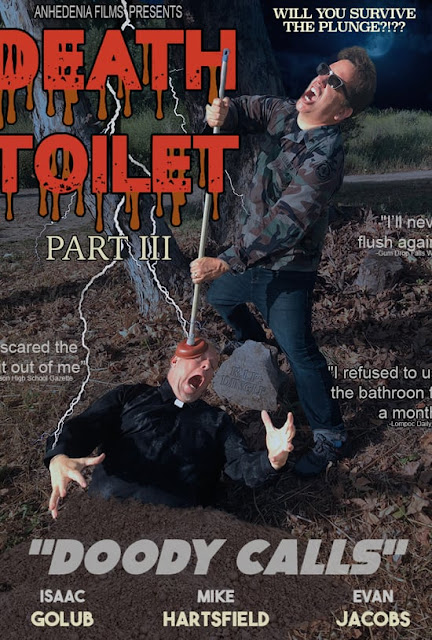 When I received an email asking me if I would be interested in reviewing Evan Jacobs' very indie comedy horror film Death Toilet 3: Call of Doody I agreed, but in the back of my mind I was sure this was something I wouldn't enjoy. Out of all the types of humour, jokes about bodily functions are down there with sex jokes as my least favourite. This film is terrible, but it is the type of terrible that I happen to love. Often times films that are described as so bad that they are good actually turn out to be quite dull, but with a short run time and some genuinely funny moments I liked a lot of what I saw here.

I haven't seen either 2018's Death Toilet or 2019's Death Toilet Number 2 but there are likely to be spoilers for those in my synopsis for this one. The first film saw Vietnam veteran Brett Baxter (Mike Hartsfield who reprises his role for the third time in this latest installment) return home to settle his deceased brothers affairs only to discover his brother's toilet has become possessed. The second film had Baxter teaming up with Father Dingleberry (Isaac Golub) after it was discovered toilets all over America were also becoming possessed. This third film has Baxter finally able to relax, after having gone on a world tour of battling possesed toilets. However, upon learning that the original toilet has been gifted to a church, and is back to its evil ways Baxter realises he must enlist special help to once again defeat it.

At fifty three minutes long Death Toilet 3 doesn't really have time to get dull, but even at this length there were moments that seemed either under developed, or which just didn't add anything to the overall story. The main story itself is kind of weak, maybe watching the previous entries would have helped with this, but I didn't really understand why Baxter felt unable to defeat the toilet himself, when the prologue montage showed him effortlessly taking out toilets all over the globe. This led to the plot of him enlisting the help of a familiar face feel a bit meandering, it was only towards the end I really pieced together what was going on. There is a recurring subplot of Baxter back in Vietnam, seeming to be PTSD flashbacks. These are mostly shown from the P.O.V of Baxter as he walks through a grassy field, holding a gun. I loved the look of these segments, and the music choice really went well with them, yet they didn't seem to serve any real purpose, or to go anywhere. Like a lot of Death Toilet 3 though, the humour wins out. 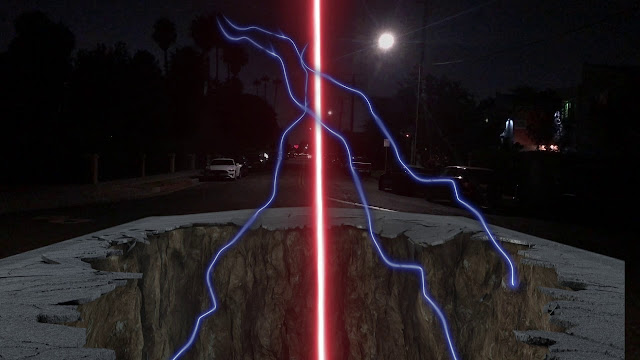 Baxter was an enjoyable protagonist, he kind of reminded me of a grown up Morty from the cartoon Rick and Morty. He is an unlikely looking hero, but the way he is constantly talking, and the serious way he approaches his ridiculous calling in life made him a fun character to watch, even when he isn't really doing anything. The acting throughout is awful, but it is purposefully so. Whether the actors are ad libbing or speaking from a script I wasn't sure of, but all the characters are constantly repeating their lines over and over which I found to be quite amusing. The comedy elements rarely are derived from the dialogue, the humour being quite physical, and is best shown with the ridiculous fights with toilets. The toilet doesn't look any different from a normal one, it attacks mainly with toilet paper and so there are plenty of scenes of characters wrestling with the paper trying to make it seem like they are being attacked, endlessly amusing due to how serious these scenes are acted.

The special effects are dreadful, but once again this adds another layer of silliness that went so well with the rest of what was being offered here. Some parts look surprisingly fun, such as an early death scene where a man is dragged up a flight of stairs by toilet paper wrapped around his neck, before being dismembered, each removed body part being displayed by very fake plastic looking replacements. The CG used is consistently bad, the same fire and explosion effects featuring in many different scenes, gun fire blasting out of the fake guns, all made the better by far too loud sound effects that run alongside this. Freeze frames and sudden extreme close-ups add to this wackiness.

Death Toilet 3: Call of Doody is not going to be a film for everyone, the lack of any real story stopped this from being a more memorable indie movie, while there did seem to be some fat on what is already a slim feature. Luckily, due to a fun cast and some moments that genuinely made me laugh out loud this was an enjoyable watch. Death Toilet 3: Call of Doody can be brought on DVD here and can be bought or rented on Vimeo.