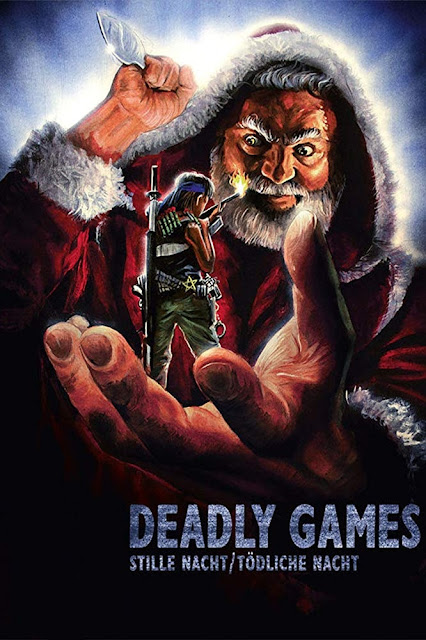 It was just the other day that I first heard of the French Christmas themed slasher Deadly Games (original title 36.15 Code Pére Noel and also known as Game Over) for the first time. It was described as a more realistic take on Home Alone, and indeed it does share many similarities. This film was released a year before that classic though, and so if anything the makers of that took inspiration from this one (so much so that the director René Manzor once threatened to sue them).

Thomas (Alain Lalanne) is a child genius who lives in a huge mansion in which he has created lots of secret doors and traps, as well as designed an entire home security system which he controls by a device on his wrist. Despite his intelligence he has an active imagination and still believes in Santa. His toy store owning mother wants her son to keep his innocence as long as possible and so encourages this belief. This turns out to be a bad move though as through a series of events a perverted psycho (Patrick Floersheim) has dressed up as Santa and broken into the mansion, with his eye on the boy. Being Christmas eve, Thomas is convinced that this maniac actually is Santa, and that he has become murderous due to Thomas staying up to try and see him, rather than being in bed asleep. With no other help but his elderly and sickly grandpa (Louis Ducreux) Thomas must find a way to either stop or escape the killer. 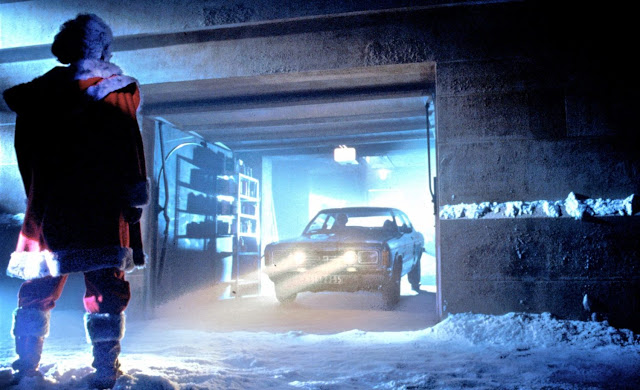 You can tell right away this is an eighties film as it opens on a montage of Thomas dressing up as a Rambo style soldier. With an impressive mullet Thomas exudes the spirit of this decade. This character was the most interesting part of Deadly Games as he genuinely believes the intruder is Santa and so has to constantly battle his unwillingness to hurt his hero. Kevin McCallister in the Home Alone movies is supremely confident, full of wise cracks, and with traps that always outwit the villains he faces. Thomas is much more believable as he is visibly traumatised by the events of the movie. At several points he breaks down in tears and cries for his mother and by the film's conclusion has a haunted 'thousand yard stare'. There are no wise cracks to be found here, aside from maybe the maniac who doesn't break the character he has created. Underneath all his madness there is a kind of childlike innocence, in his eyes it all might be a literal game he is playing with the boy. Both Lalanne and Floersheim were expertly cast and there is a great dynamic between the pair, the same can be said of the tender relationship between Thomas and his grandpa.

The slasher side of things perhaps doesn't play out so well on screen. While there is a bodycount by the films conclusion, these all take place off screen, with just an early shocking kill of a dog taking place in front of the camera, I loved how the scene where the killer enters the house (via the chimney of course) plays out. Shown from Thomas's perspective, who happens to be hiding under a table, you see the wonderment he has of discovering Santa is indeed real, turn to outright horror when things take a turn for the terrifying. The film becomes a never ending game of cat and mouse between the two, with many moments where it seems like one or the other has won only for events to split them back up again. Via a whole multitude of montages Thomas creates various traps and weapons to battle Santa. Things like sharpened pencils set up on the floor, dart guns, flaming arrows, and even a self made hand grenade. At least half of anything he ever creates though doesn't work out as intended, some of the more vicious traps sadly end up not even doing anything. 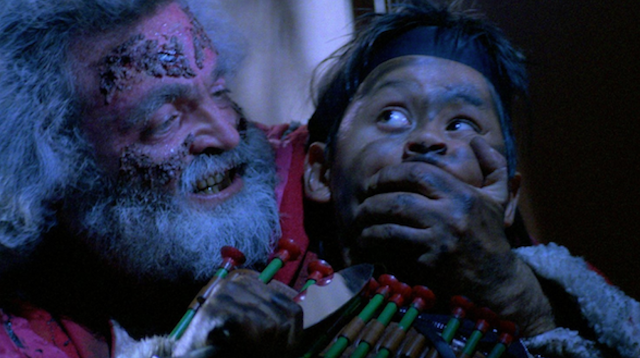 Complaints outside of the mostly suggested horror include various sub plots that go nowhere (such as Thomas's friend who is told what is happening via a fax message), and it seeming to be implied that Thomas's mums boyfriend is secretly up to no good. Also, his grandpa was a bizarre character, I couldn't tell if he was meant to be a bit senile, though I liked the shots from his perspective, his failing eyesight meaning the camera view looks like it is coated in vaseline. The camera work and editing was frequently interesting, great use of audio and visual flashbacks to earlier dialogue and scenes, and the fantastical look the set sometimes takes on that felt like it was a representation of Thomas's active imagination.

Christmas horrors are something that I have begun to get into a lot more these past few years. It is a thick subgenre of horror that seems to contain no end of movies. Deadly Games may have its issues, but despite those I had an absolute blast watching this. Deadly Games is currently streaming on Shudder.

Posted by Daniel Simmonds at 07:42