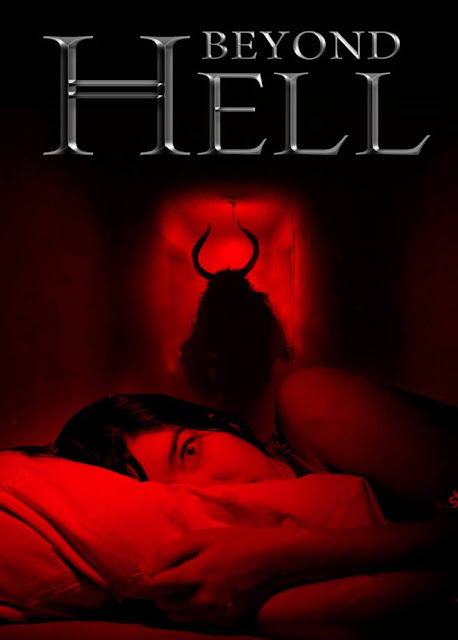 Beyond Hell is an indie horror that was written and directed by Alan Murray (Exposed) in his feature length directorial debut. The film follows a familiar path and as such it was never going to be an essential horror to watch, yet despite some obvious budget limitations this was still relatively fun.

After returning from a vacation to South America, high schooler Seth (Sean Rey - Hemlock Grove) brings with him a new drug he found there, and during a get together with his friends they all take it, expecting a fun time. Wholesome Maryssa (Kearsten Johansson - Exposed) finds herself transported to a Hell dimension where a demonic entity known as Belial (Gavin R. Downes - Exposed) is able to use the girl as a bridge to invade Earth. With one of the friends at the party dead due to all this, Maryssa is blamed and committed to a psychiatric ward. One by one however each of the friends who took the drug are turning up dead in brutal circumstances, Maryssa, Jake (Sebastian Deery) and another friend set out to find a way to sever the connection Belial has to the world. 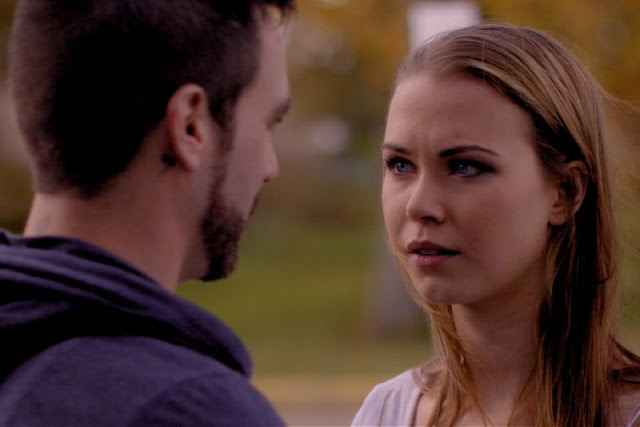 The general storyline has been done to death countless times before, both better and not as well implemented as this one. Things begin oddly with a prologue that almost seemed like it was taken from a different film entirely. It shows a man (who maybe was Seth) being chased by a load of cultists, before being captured. Aside from an epilogue that took place in the end credits this intro scene didn't seem to have anything to do with anything. If Seth was meant to be brainwashed there was never any indication he was, so it felt like a bizarre inclusion when Seth could have easily just got the drugs from anywhere rather than an Indiana Jones style sequence. Regardless of similarities Beyond Hell was fun once it got going, even if it is constantly let down by sub par special effects. The worst of these is the CG used to simulate the demon world affecting the protagonists, CG tentacles straight out of 2005 are one such eye sore, as are the superimposed zombie hands that 'burst' out of the floor, and on another occasion the wall. Day of the Dead did a similar effect, but practically in 1985, and that one looked a hundred times better than what we are shown here.

Elements that I did enjoy include the main protagonist Maryssa, Johansson was a likeable lead, and I also found it refreshing that the film's love story subplot went somewhere slightly different than expected, which gave one of the side protagonists the biggest character development of the movie. Belial had a cool look to him, though I got the feeling if he wasn't covered in so much blood he might have fitted in quite well as a bad guy on the Power Rangers. The various monsters have a good design to them, less so the underlings, but it can't all be good. Belial was kind of a fun antagonist, though he seemed to enjoy talking far more than doing evil stuff. Also, due to the distortion effect on his voice there were many times I couldn't understand a word he was saying, I just assumed it was typical bad guy things he was spouting so didn't feel I missed out on much. Some of the smaller roles in the movie had some suspect acting, in particular a Detective whose scenes were not the best or most convincing. 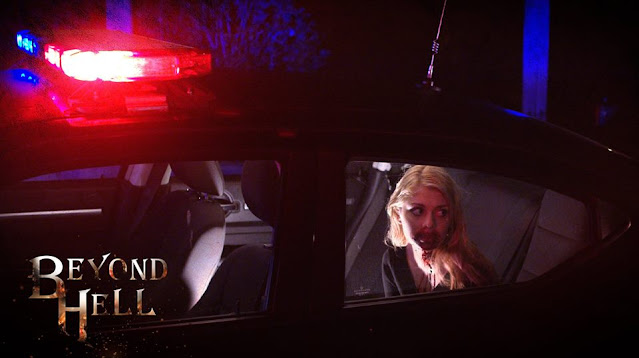 The story had plenty of silly elements along the way, such as Maryssa managing to escape from the psychiatric hospital off camera, and her friends wardrobes always managing to have clothes that perfectly fitted her. It also seemed a bit random when Belial would attack the friends, but the few death sequences shown were actually kind of entertaining. The budget meant that this never felt as action packed and physical as it should have been, even the finale wasn't the most kinetic of sequences, held back by plenty of talking.

Beyond Hell doesn't do anything to break the mould, the format of the story was predictable, and attempts to broaden the story, as seen with the prologue and epilogue, didn't do enough to feel like they neatly fitted in with the main plot. Still, as rough around the edges as this was it was still a good bit of escapism. Beyond Hell was released on several Digital platforms on 4th December thanks to Indican Pictures.