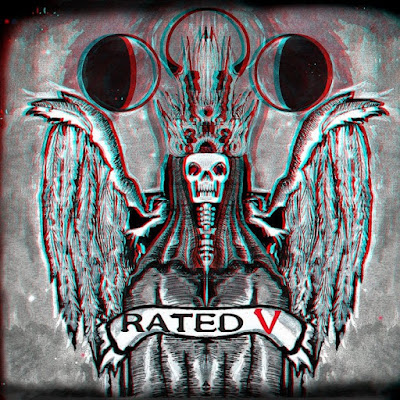 I don't usually review music and this is my second album in a week I am taking a look at. Detroit 'deathgaze' duo Vazum (Emily Sturm and Zach Pliska) released a new Halloween themed concept album at the start of October titled Rated V. The album is made up of two distinct halves, the first features 6 tracks of doomgaze rock songs, the second half made up of ambient instrumental tracks.

Bad Clown kicks things off and is one the longest songs on the album. Over 9 minutes you get a song that was actually faster in paced than I expected, though still slow and doomgazy as you might expect. Werewolf comes next and I enjoyed this one a lot more. It, like many of the tracks here feels relentless in how the chugging guitars play out, the wolf howls at several points were a fun addition. The third track is Frankenstein Girl and was another good one. Much like the others I love how the music just pounds away and feels like it could go on forever without ever becoming dull. This is followed by Vampyre, which itself is followed by Vampyre Killer, that was the fastest and heaviest track on the album. In a weird way it reminded me of lite rave music, not that it was at all. Witch Lich is the final proper track and returns back to a slower format with a vague Cradle of Filth sound.

The second part of the album is the ambient stuff. I figured I would know what to expect but there was one surprise here. Phantoms reminded me of one of those trashy eighties horror films that happens to have a great soundtrack, while follow up tracks Witch's Breath did what it said on the tin, it was indeed very witchy in feel. Summoner was very ambient, though it does end with what sounds like a demon being summoned. Clown was the surprise track, it was a jovial carnival tune that was creepy, made more so by the sounds of someone crying in the background, the crying changing into out of control uncomfortable laughing as the track progresses. Penultimate track 13th Hour is another background sounding one, with final track Abyss indeed sounding like it is the accompaniment to discovering a gaping maw to Hell in the earth.

At nearly an hour and a half long this is one of the longer albums I have heard for a good while, technically it was like two albums in one which would explain that. All in all it wasn't bad, some the proper tracks were great, while the ambient ones are surprisingly varied despite carrying similar sorts of vibes. Rated V is out now, check out Vazum's Bandcamp page for more details.