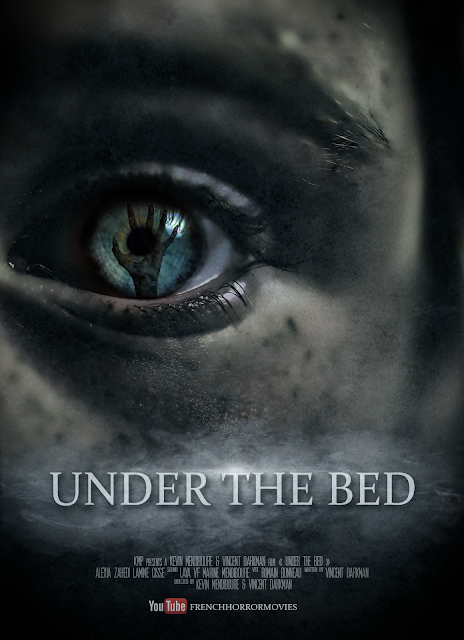 Under the Bed is the latest short horror from French director Kévin Mendiboure (The Mannequin, The Follower). This time around he is joined by Vincent Darkman (writer of both this and The Follower) who co-directs alongside. Much like The Mannequin this doesn't try to break the mould of short horrors, instead picking a typical idea and crafting an effective enough short around it.

As a child, the woman (Alexia Zahedi - The Mannequin) in Under the Bed was scared of a creature, which she told her mum lived under the bed. Now grown up, over one long night she discovers that the fear of her childhood is very much real.

Despite being a French film there isn't a need to know that language. Get past the introduction and there is no dialogue here, save for screams. The short is just over 4 minutes in length and so quickly gets into the swing of things. It was all very typical, there are false scares, and moments where it seems something terrible is about to happen. I appreciated how it approaches this terror, rather than the very tired approach of having the monster suddenly appear in full view at the films conclusion it is quite early into this that it is shown. This was an effective moment, but it did then lead to a feeling that it was just playing around with the woman rather than being a legitimate threat. The creature design was decent, I especially liked the long fingers of it.

Under the Bed is an effective short horror film, but it doesn't do a lot that was novel or surprising. Instead it is content to follow a lot of the tropes of the short horror genre, though follows them in a competent manner. For its short length alone this is definitely worth a watch.