The Rotting Zombie's Round-up of Horror News for November 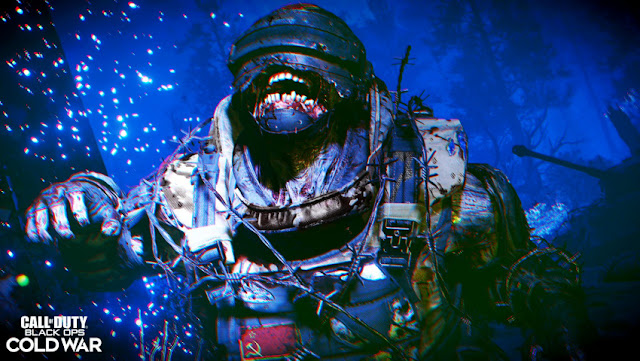 Another month of this darn year has passed, but in happier news England's second lockdown is about to come to an end, though leaving that to head to Tier 2 which isn't a lot better, but at least me and my support bubble can eat out, and I will be able to get my awful hair cut! I have been trying to cut down on the amount of news mentioned in these round-ups, but with less films seemingly coming out this year it has meant the amount of news I am receiving as increased dramatically!

Video games to begin with. I am currently playing the first person 'walking simulator', Visage. This game, that takes place within the confines of a haunted house was deeply inspired by the fantastic P.T demo.
The latest Call of Duty, Call of Duty: Black Ops Cold War came out in November. This thankfully includes Zombies. Currently there is just the one map, Die Maschine that is a wonderful remake of Nacht der Untoten. There is also Dead Ops Arcade 3. This is an overhead level based zombie battling shooter which has you on a mission to defeat the gorilla who kidnapped your pet chicken.
November 5th saw the release of Outbreak: The Nightmare Chronicles, which is the third game in the Outbreak series and has come to Nintendo Switch. This is a third person single player adventure that is inspired by classic Resident Evil and Silent Hill.

A new documentary focusing on the Grindhouse horror classics from the 1970's and 80's has been released, coming from Dustin Ferguson. Stale Popcorn & Sticky Floors features interviews with a whole host of icons such as Lynn Lowry, Brinke Stevens, Mel Novak and more. This was due for release on Halloween.

James Mackenzie's An American Zealot has released an official trailer and poster. This is about a Catholic schoolgirl who plans to murder her best friend's abortion doctor and about the ramifications of deciding to do this.
The director's cut of the great found footage horror Hell House LLC came to Amazon Prime on Friday 30th October. The director's cut includes a host of extras such as cast auditions, scouting of the iconic location, behind-the-scenes clips and more.
The November releases for online subscription service ARROW includes the launch of Ban This Sick Filth! which is a rotating catologue of some of the more controversial horrors, currently includes We Are the Flesh, Orgies of Edo, The Baby, The Woman and Bat Pussy. Other November releases included documentary The El Duce Tapes, the Essential Giallo Collection, the Female Prisoner Scorpion Collection and exclusively, He Came From the Swamp: The William Grefé Collection, which includes Sting of Death, Death Curse of Tartu, Mako: Jaws of Death and more.
The Arrow Video US release schedule for November included Lake Michigan Monster (11/03), Burst City (11/10), Silent Running (11/17), and He Came From the Swamp: The William Grefe Collection (11/24). These all release to Blu-ray.
Terror Films has acquired the worldwide digital rights to Sean Roberts home invasion horror The Night They Knocked. In this one a group of friends staying a remote mountain house get visited by a murderous group of travellers. It was nominated for Best Director and Best Feature Film at the New Jersey Horror Con. This had its online premiere at the Kings of Horror YouTube Channel on November 6th.
This year has been a prolific one for filmmaker and actor Shane Ryan. Choke released in May, followed by Heartbeat, which was followed by the lockdown inspired thriller Sinful, as well as Quarantine Girl. More recently was sci-fi action flick Attack of the Unknown. Ryan is currently finishing up his Ted Bundy Had a Son trilogy. That in itself was a follow up to his Amateur Porn Star Killer series which is due to get a 4th edition DVD release in a few months, along with Ryan's homeless drama, The Girl Who Wasn't Missing from Wild Eye Releasing. Other films of his that are in various stages of development are LGBT coming of age drama, This Girl, This Boy, arthouse horror film Red Oedipal, God Got Ill, The Owl in Echo Park, American Virgins, Trash Kids, Throwaway Girl and the Japanese film Sasebo. On the anthology side of things he has been involved with Philia, Gore Theatre 2, Gore Grind, 60 Seconds to Die 3, Awesomely Righteous & Radical, and made the short Autopilot for the #CormanChallenge.
Posted by Daniel Simmonds at 09:19