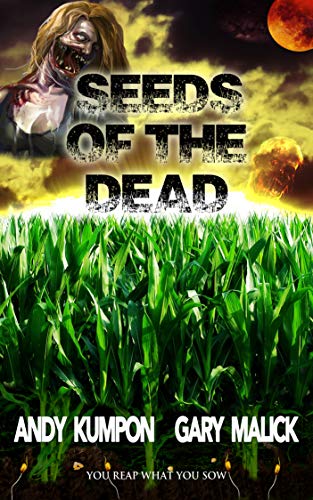 Seeds of the Dead is a zombie horror novel with a humorous edge to it. It was written by Andy Kumpon along with Gary Malik and takes a gore soaked look at the issues of GMO foods through the lens of a small town undead outbreak. Despite being on the lighter side of things this still features plenty of death and violence, even if the sometimes comic book like depictions of good and evil mean this can feel a bit light on the horror side.

Peter Malik is a scientist working for the powerful Moonstar Foods Inc. who specialise in GMO foods. Peter decided to leave his small hometown to work for them, genuinely hoping he would be able to help the world. Instead, one day he is horrified when the latest batch of food he had been working on transformed the labrats into flesh hungry monsters. His sociopathic boss siblings, Richard and Sofia are pleased with this outcome and make Peter a generous offer in exchange for his continuing assistance. Given time to contemplate things he is granted some leave, with which he travels back to his hometown to see his parents. Not able to be party to the unethical experiments, he publicly speaks out about Moonstar Foods, which turns out to be a bad move. The powerful company swiftly cause an undead outbreak in his town via contaminated food, doing it both to punish Peter, but to also show potential clients what they are capable of with their biological weapon. Cut off from the outside world, Peter and a handful of other survivors must find a way to both survive the outbreak, but also find a way with which they can escape the doomed town.

There are no real surprises with Seeds of the Dead, it isn't going to stand out as something unique, and the way events play out fit in well with the tropes of the zombie genre. Sometimes that is no bad thing, sure I have read so many books like this, but this is still entertaining, and feature plenty of the walking dead with a few things to set them apart from others. This was written in a simple style, again no bad thing as it means that events can keep going and going without getting too bogged down. From the start of the outbreak to the finish there is no downtime, characters bouncing from one situation to another. Along the way characters make noble sacrifices, while others have more abrasive roles, of course at some point a character is going to be bitten and hide their wound, as is written in stone for this genre. Characters and situations here were pretty black and white, a couple of characters get some decent development, in particular one who I disliked to begin with but who really came into their own. Others are not so well developed, in particular the antagonists. Richard and Sofia are so comically evil that it is hard to really take them seriously as a threat. Anderson is a hired goon who seemed to be the character type of a recurring unstoppable villain, but I never felt he made as much of an impact as he should have done. He pops up every now and again but he really doesn't get enough page time to build him up into as memorable a foe as I would have liked. Continuing with the black and white feel is Moonstar Foods where no attempt is made to give them layers, they are just an evil company. Then at some point the hacking group 'Anonymous' get inserted into the story, made out to be good and just rather than the more neutral reputation the collective have in the real world.

Onto the zombies. These are more disgusting rather than scary, they are often described secreting a slime type substance of pus and other bodily fluids from all their orifices. I don't really like icky stuff but it did lead to one of the more interesting ideas, Everywhere the zombies have travelled gets coated in an almost slug like trail of slime, this impacts the story at several points as both characters and vehicles slide around on this stuff which makes a dangerous situation even more so. Initially it seemed these rotting dead were a scary foe, with their body parts still able to function when severed. Around the halfway mark a weakness is discovered and while this made for some fun moments it did drastically remove the threat level these shamblers conjured.

Seeds of the Dead may not break the mould when it comes to the zombie genre, but it was still an entertaining read, one whose simplicity works in keeping things always entertaining from the beginning to the end. Seeds of the Dead was released on 29th June thanks to Killerbeam Entertainment.