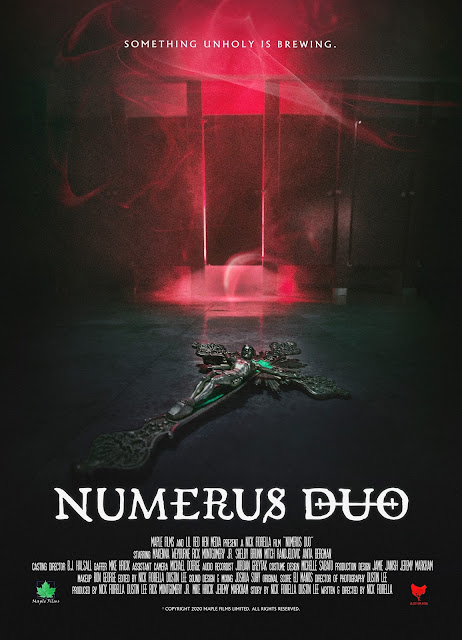 Numerus Duo is a short comedy horror film that was written and directed by Nick Fiorella (Safe House). It has had a successful run on the festival circuit, picking up 12 awards and 3 nominations, including Best Short at the Chicago Horror Film Festival. The humour didn't appeal to me, but I can't deny this was a very well made short.

This takes place in a convent school and during a dark and stormy night a group of schoolgirls are taking communion. One of the girls, Christle (Makenna Weyburne - She Watches from the Woods, The Unseen) begins to feel ill after taking the communion bread, and so the priest (Rick Montgomery Jr. - Lake Artifact) excuses her. The girl heads to the women's toilets where it becomes clear a demon is trying to steal her soul.

This begins strong, a biblical quote before heading to the church the short takes place in. It is all played seriously up to the point Christle heads to the toilet. With the possessed girl there was similarities with The Exorcist, though with a different bodily fluid to vomit being used. The humour here is literally toilet humour, and that has never been something I'm keen on. Over the course of the eight minutes there are quite a few gross out moments, I liked how seriously characters were acting for the most part despite the ridiculous nature of the plot. There was also good lighting used, and I thought the look of the possessed girl was decent.

Numerus Duo had great atmosphere throughout, the special effects were mostly good also, I liked the lighting used in the toilet scenes, and overall there was a consistent horror tone despite the subject matter. It was the comedy here that I didn't get on with, though that's just due to my personal preferences rather than any fault in the storytelling. Check out the film's Facebook page for more details.