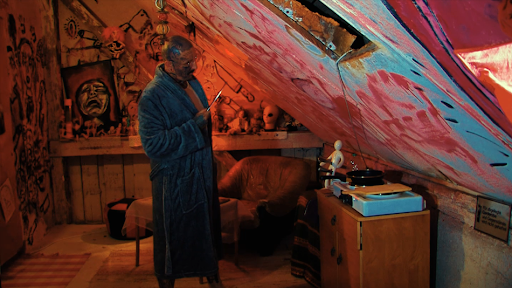 Neighbor No.9 is a short  German language, Austrian horror film that comes from Wilhelm Müller, who describes himself as a hobby film maker. From his back catalogue it seems he specialises in exploitation films, having had his shorts featured in a variety of anthologies such as Tony Newton's Faces of Fear, Gore Grind, Gore Theatre 2, Grindsploitation 8, and in Shane Ryan's Faces of Snuff and the upcoming Ted Bundy Had a Son. The type of films in these types of collections are not something I personally find appealing at all. I find them downright nasty and a bit pointless, but I guess that is the point, to show the depths of human depravity.

Stefan Schanda plays the titular 'neighbor no.9', a heavily tattooed deviant who lives in a run down attic apartment, the walls adorned with cut outs of naked females, the man himself definitely a bit perverse, as can be seen with the introduction to him laying in bed making love to a pig's head. One day while out shopping he encounters a young woman (Mulier Sine Nomine) whose car has broken down and who says she is an influencer on her way to an important photo shoot. The man however has different plans for her...

Before even watching this I had a good idea where it would end up, and I was correct in my assumptions. This is exploitation and so nothing but bad things were going to happen here. I will say that I thought the design of the man's apartment was very fitting. Nearly the first five minutes of the short has the camera travelling around his flat, taking in all the detail of his own drawings and the posters and cutouts on his walls. This was good set design and really seemed to go with what we are shown of this character. The rest of the movie goes by at a much quicker pace with the body horror starting around ten minutes into this twenty one minute film.

Being presented as an actual short film rather than as a found footage style horror meant there was more time for things to occur, it was all as nasty as expected, with dismemberment, torture, and a knife stuck where a knife really shouldn't ever be (brought to mind the opening of the darn awful Headless). The special effects were not the worst out there, sure some parts looked a bit fake, but there is editing that switches up the real actress and the prop that is done well enough to create an illusion. These types of films often feel a bit aimless, but I admit the end of this was darkly suggestive. Did I enjoy Neighbor No.9? Not really, but then it isn't my thing. If this is your type of film then you will probably get some enjoyment out of this, it is competently made and well put together. Neighbor No.9 is due to come out on DVD in the future.