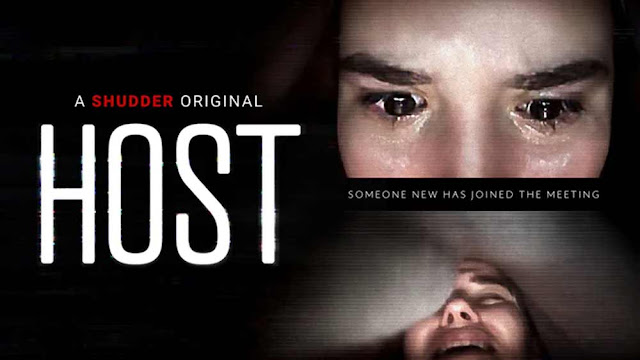 Host is an English horror film which takes place entirely within the confines of a Zoom call. The whole film was apparently shot entirely on that video call app, which makes sense when you take into account this was all filmed during the first England lockdown earlier this year. The effectiveness of this horror was slightly lost on me for two reasons. Firstly, I have never used Zoom and so haven't ever been in a similar real world situation of talking to multiple people on video calls, and secondly 2014's Unfriended had a very similar idea and so took away a lot of the impact this would have otherwise had on me.

A group of friends are bored during lockdown and so have decided to hire a spirit medium (Seylan Baxter - Macbeth) to hold an online seance with them via Zoom. The medium warns them to take it seriously, but one of the friends, Jemma (Jemma Moore - Doom: Annihilation) can't resist pretending to have come into contact with a spirit. Not long after this the medium loses her internet connection, which is bad as each of the Zoom members begin to experience scary happenings within their own homes. It seems that Jemma's jape has allowed an evil spirit to be summoned, and with no one to help them out the friends must try their hardest to find a way to break their unwanted connection to the spirit world. 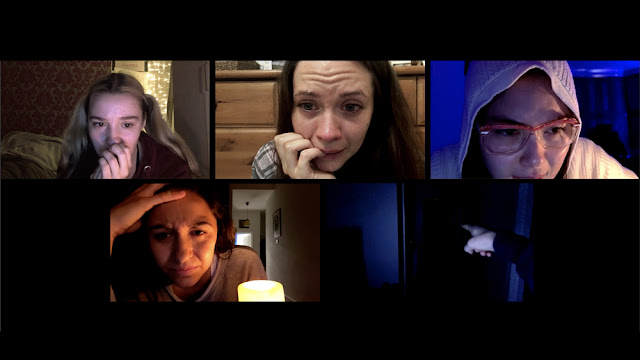 At fifty six minutes long I figured the reduced length would help in telling a more concise story. I appreciate now the story that Unfriended brought as Host suffers a bit from the lack of much plot. The friends have accidentally summoned an evil spirit...and that's it. What follows is a roller coaster ride of ups and downs, there are blips of scary activity followed by moments of down time which occasionally frustrated. It kept seeming like anytime the film got unnerving things would settle back down again. I felt like a more relentless pace would have benefitted the shorter run time. It is just under halfway into the movie that the horror really begins and there are some super effective moments. If you have seen Unfriended you will be likely correct on where the film is going to go, and if anyone is going to survive or not. What was unique about this one was having it take place during lockdown, reflected in what characters are talking about and how they act. For instance, at one point a character flees their home, but before doing so they ensure they have put a facemask on.

The special effects work well here. There are all manner of Paranormal Activity style moments of objects moving around on their own, and characters getting pulled around by unseen forces, and it all looks authentic thankfully. It leads to some of the spookier moments here, with all the horror always conveniently captured on the Zoom call. There were maybe a few too many jump scares for my liking, and certainly ending a film on a jump scare is always a big no no for me. Regardless there were plenty of moments that worked very well, such as discovering where Radina's boyfriend had gone off to, and Teddy's (Edward Linard) late reappearance oblivious to the horror that had been going on (due to leaving the Zoom call pre-horror) was a highlight. 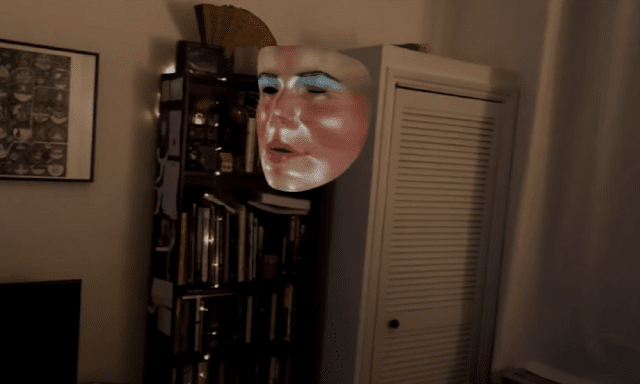 Host was a horror that constantly fluctuated between delighting me and being ever so slightly frustrating. Whenever it seemed it had reached its peak it would dip back down in quality for a time, making a film that is under an hour long still feel a little stretched out at times. If it hadn't been for Unfriended I would have loved this a whole lot more. As it is, it is a good horror film, but one whose impact is lessened by not being wholly original. As a final word, even Unfriended wasn't original, the first found footage film of that type I ever saw was 2006's The Collingswood Story. Anyway, Host is currently streaming on Shudder, it isn't bad, you should probably check it out.