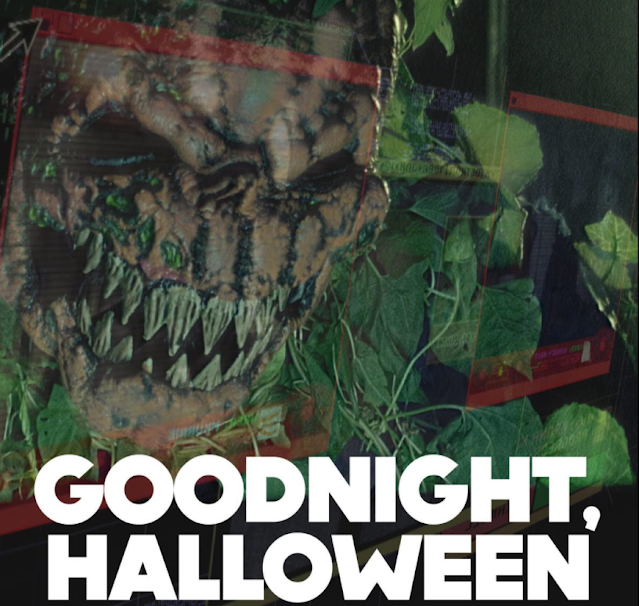 Goodnight, Halloween is a short thriller that comes from Luther Bhogal-Jones (Black Spot, Creak). Despite featuring monsters this isn't so much a horror, but does something that is both retro in feel while also being engaging.

The 13 minute short takes place in an alternate reality in which all the creatures of Halloween have always co-existed alongside man. In the 1980's a new government policy has been enforced which allows humans to exterminate these monsters without fear of consequence. The short picks up a year after this bill, with the majority of monsters either dead or in hiding. One of the few surviving monsters is Konel (Jean-Daniel Byrne/Andrew Calverley) who is in the process of desperately trying to upload a file to the web which will prove the governments genocidal program. He is close to succeeding in his mission, but with government agents closing in, and a traitor among the surviving monsters it is a race against time.

Apparently Goodnight, Halloween was 14 years in the making, initially thought up when Skype was just becoming a thing. The style of the short felt very 2020 with the three main characters separate from each other, conversing via a video call. It was also timely that the government leader here seemed coincidently similar to Donald Trump, while characters essentially being locked down in their various hideouts rang true to this crazy year as well. I admit it was a bit hard to take it seriously due to the idea of monsters using technology to communicate, especially when the protagonist is a pumpkin headed leaf creature! Thankfully his design is pretty cool looking, while the witch and vampire he talks to are cloaked in digital effects to reduce their visibility.

Being set in the eighties there is some great synth music going on, I liked the look of everything as well. The alternate part of the world meaning despite being the eighties the internet exists, and also for some reason the letter 'C' doesn't seem to exist. There was a cool design for the computer screens combing retro graphics with more modern technology.

From my memory of Bhogal Jone's previous shorts this seemed the most polished and well filmed. The set design and special effects were both pleasing, and the story, while simple, still remained thrilling. Goodnight, Halloween is free to view on YouTube, so I suggest you check it out and see for yourself the unique blend of styles used for this paranoid digital thriller.