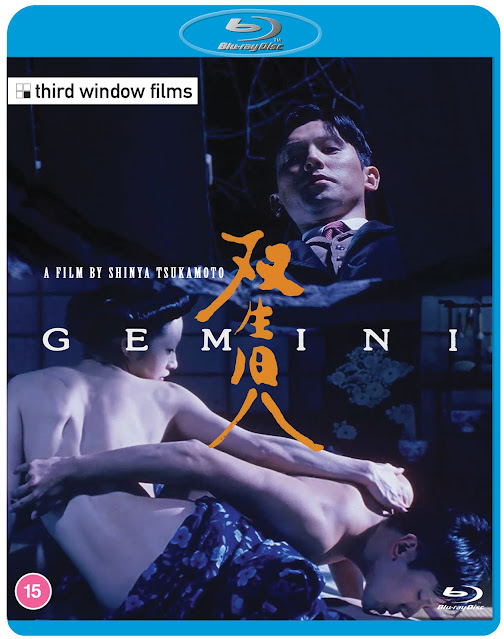 I had never heard of the 1999 Japanese horror film, Gemini until learning it was coming to Blu-ray for the first time in Europe and the UK this year. It was directed by Shin'ya Tsukamoto who wrote and directed the cult horror, Tetsuo: The Iron Man. Gemini was a captivating movie which blended the realistic with flamboyant and theatrical performances.

Yukio (Masahiro Motoki) is a well respected doctor whose life was made complete after marrying the beautiful Rin (Ryo). This enigmatic woman suffers from amnesia after she was involved in a house fire, and so it is not known where she originated from. After the sudden death of his parents Yukio is confronted by a strange man named Sutekichi (also Motoki) who resembles him in every way. This man pushes Yukio down a well and takes over his life. 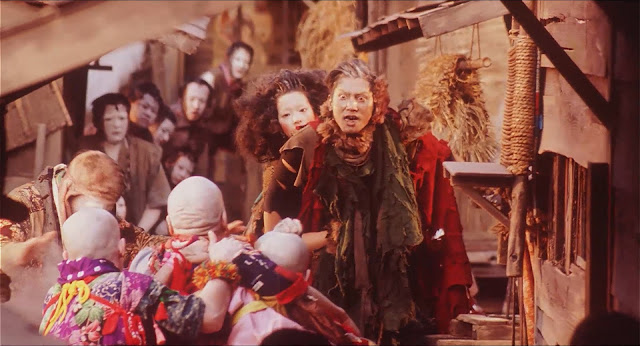 Objectively the story told here is quite simple, but it is shown in a way that kept me guessing as to what was going on. There is a unique look to this film world which is split into two halves, that of the rich people, and those from the slums. Much like the movie The Corpse Bride there is a distinct look for each of these collection of characters. Yukio's world is one of order, people are very ritualistic, show little emotion, and are very measured in their responses to the world. The characters of the slums on the other hand feel like they are stage performers, the rags and make-up they wear all very exaggerated, along with their performances. The scenes that occur within the slums felt like something out of a musical. One of the core themes here is the divide between the rich and the poor. Despite being a doctor, Yukio can't help but feel disgust and disdain for the poor, a belief that his father put into him. This comes to a head at one crazed point in the film when a poor woman arrives at his house begging for help for her plague ridden child. Yukio ends up ignoring her in order to instead see to the town Mayor who had had an accident while drunk.

Motoki was great in his duel role as protagonist and antagonist. For a lot of the film I wasn't sure if these two characters even both existed. I thought it was possible either that whole part was a recurring nightmare sequence, or that Rin had lost her mind and was imagining it. Either way the conversations he has with himself are some of the highlights of Gemini. The two characters change over the course of the film, Yukio's imprisonment down the well turning his appearance into a feral one, while Sutekichi's adoption of the doctor's mannerisms and way of behaving seeming to affect him so that even when there is no need for him to hide his true self he can't help but do so. The story is helped along by some lovely looking manic flashback sequences that help to explain a lot of the mystery. 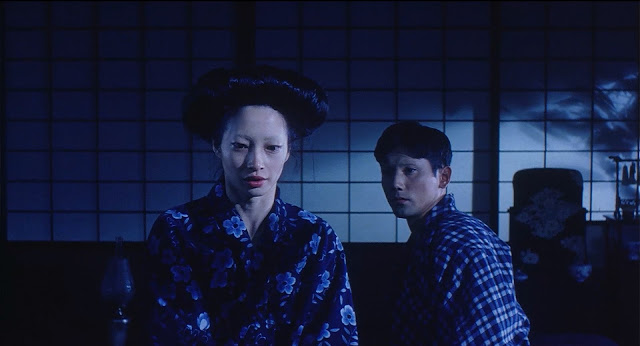 The time period wasn't specified, but seemed to be at some point around the start of the 20th Century. I was surprised to see this was first released in 1999 as I could easily believe it was a recent film, it felt a bit timeless. The vibrant mix of colours for the slums, along with the conservative darker tones for Yukio's estate made a lot of the film captivating to watch. Also effective was the film's score, very Japanese sounding to me and added to the vibe here that was far more psychological than horror focussed.

Gemini was a good psychological thriller, one whose message might be obvious to see, but which still remained interesting throughout. Gemini came out on Blu-ray and digital on November 2nd from Third Window Films. Extra features include a new HD transfer, audio commentary by Tom Mes, and some featurettes.