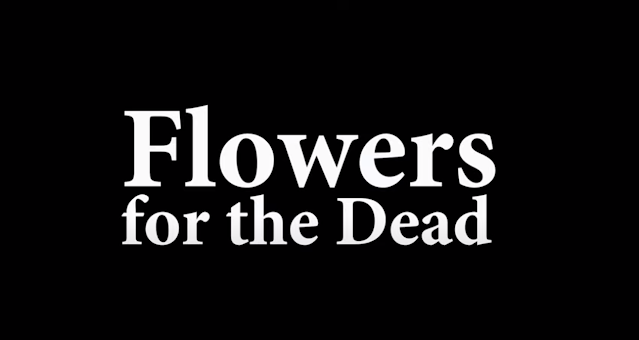 Flowers for the Dead is a short horror film that comes from John Whitaker and Richard Markworth (The Isolation Horrors). It features the music of Whitaker's 1i2c and at points it feels like it was almost going to change into one of his ever interesting music videos.

Markworth plays Peter Baxter, a conman who dreams of relaunching his career as a paranormal investigator. A young woman, Holly has recently gone missing in the area of Abbots Wood, which is purported to be one of the most haunted woods in England. Peter sees this as the angle he needs to get popular again. While he is sure the girl is actually safe and sound, he intends to pretend that he has contacted her spirit in the woods. He has roped in an acquaintance he met in prison, George (Alan Austen) to help film him carrying out his investigation so that he can put it up online later. Once at the woods things start to get complicated, and it starts to seem like there may actually be some truth behind the wood's haunted reputation...

Flowers For The Dead is nearly 27 minutes long and roughly split into two sections. The first ten minutes are mostly made up of a conversation George and Peter are having in a car. Both characters have an entertaining exchange of words, with the talkative Peter keeping things moving. The second part all takes place in woodland, which looked great on camera. Throughout there are cutaways to the camera travelling through the woods, with 1i2c's urgent pounding music playing out, these moments were the highlight for me, especially the final time this is used at the films conclusion. The story was simple, but it was a fun idea and it went to some places I didn't expect. There was also a random subplot about a crazed man wandering the woods. Mostly this is all played comically but there was at least one or two parts in the film that really were creepy, it would have been nice to get a few more moments like those.

Flowers for the Dead was an entertaining, heavy on dialogue short, with a fantastic soundtrack, great lighting and a memorable lead in Markworth.