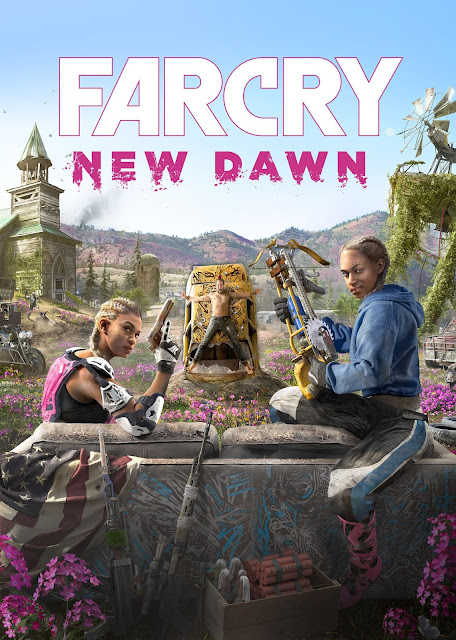 I have long enjoyed the Far Cry series of first person action video games and it is one of the few ongoing series in which I have stayed up to date, having played all eight entries. None of the previous games have been reviewed on this site (aside from the zombie DLC for Far Cry 5), after all they are action games and not horror, but with last year's Far Cry: New Dawn enjoying a post apocalyptic setting it meant that it can get reviewed, as that setting is something I am always happy to write about. It's impossible to talk about this game without spoiling the ending to Far Cry 5, so beware of spoilers for that one here.

New Dawn is a direct sequel to the fifth game and takes place 17 years after a nuclear war decimated the world, an event termed 'the Collapse' by the survivors. Hope County in America fared better than many other places, with it felt that being situated in a valley protected it from the worst of the impact of the bombs, while the high amount of prepper bunkers in the area meant more people were able to survive. Over many years two groups emerged who were able to bring back some semblance of normality. The south of the valley saw the emergence of the township of Prosperity where all were welcomed. The north of the valley saw a new community called New Eden, made up of people who have rejected all forms of technology. For years all prospered, until a vast roving group of bandits calling themselves The Highwaymen, and led by twin sisters Mickey (voiced by Cara Ricketts - Far Cry 5, Far Cry: Primal) and Lou (Leslie L. Miller) invaded the county. The group rampaged across the land, kidnapping, murdering and extorting everyone they could. The daughter of the leader of Prosperity, Carmina (Reina Hardesty) had heard about a man named Rush (Patrick Garrow - Slasher) whose group had brought law and order back to many places in the U.S and so set out to find him. She was successful and he agrees to bring a train loaded with supplies and his best soldiers to help defeat the Highwaymen, but he gets ambushed, the train destroyed, the supplies stolen, and everyone killed. All except Rush who is kidnapped by the sisters, and the Captain of his soldiers who escapes and makes her (or his) way to Prosperity. 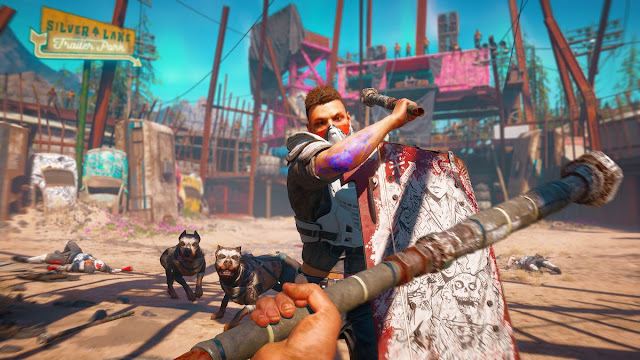 While this is a direct sequel to Far Cry 5 it is not a main line game, and was released with a budget price. It took roughly ten to fifteen hours to complete and I would say is roughly half the size of 5. The game takes place on the same map as before, but it is vastly changed up so that it is always a cool surprise when you realise a location you have gone to is the same place as the previous game. Despite being post apocalyptic the game world is a beautiful place, full of wildlife, trees and flowers, the locations themselves show the effects of what has gone on. Many buildings lay abandoned, or buried by the earth, the others have been daubed in the Highwaymen's token bright pink graffiti (a great touch being the gangster rap music that blasts out of loud speakers at these places). This is an open world game in which the player is free to explore much of the map from the get go. There are plenty of side missions to do, such as recruiting characters who can fight alongside you, solving little treasure maps to get resources, taking over enemy outposts, and even travelling to seven different American locations (such as Alcatraz) to go on supply runs. There is plenty to do, but the smaller scope of the game can be seen with such ideas as being encouraged to retake enemy outposts, with the only difference being the enemies holding them being stronger. You get perks with which to upgrade your character (such as the ability to take out enemies using stealth) and also currency that you can use to upgrade Prosperity, which unlocks the ability to craft more powerful vehicles and weapons and increase your base health amount.

Combat is as fun and as meaty as it has always been, and while it was never challenging (especially once the higher powered gun tier is unlocked) it was very fun to do. Wildlife returns, there are many different animal species to kill, and fish to catch. Unlike the previous game there is no real incentive to do much with this part of the game and so I largely ignored it. One of the first weapons you get in the game is a sawblade launcher, I figured many of the weapons would be as fantastical as this. Instead it is the usual assortment of rifles, pistols, shotguns, snipers etc, the only difference being in the D.I.Y look to them. It would have been nice to have a bigger assortment of custom weapons. Like the previous game you get access to a grappling hook and a wingsuit, both helping you traverse the world more easily. In terms of vehicles there are now no flying ones available, instead boats and road vehicles are the order of the day. 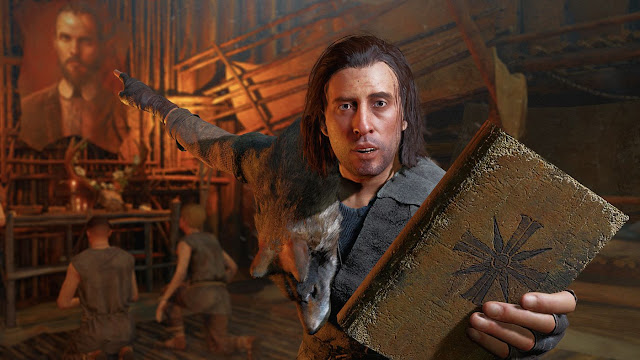 The story is a weaker element of New Dawn. While I enjoyed the antagonists I wouldn't say they are as strong as earlier entries in the game. The psychotic twins interact mostly with your character via radio chatter, with them only actually appearing in the game at around four different points. That's a shame as they have some great moments when they do appear, and the game goes some way towards trying to humanise them a bit. I was more interested in Joseph Seed (Greg Bryk - Saw V), he was the antagonist for Far Cry 5 and last seen in the memorable ending of that game in which he had captured the player character. It was interesting to see what had become of him, and also finding out what had happened to the player character of 5. This all comes into the game around the halfway mark. I don't necessarily agree with the angle they took with this part of the game (a few boss fights have you battling literal monsters), yet it was the biggest draw for me. There are many returning characters to New Dawn, and even ones who don't return have notes dotted around the game world that tells you what happened to them. If you haven't played Far Cry 5 then a lot of the most interesting parts of New Dawn will be lost on you.

Far Cry: New Dawn may be one of the more recent weaker entries, but that is only due to the smaller size. As a huge fan of 5 it was very cool getting to revisit the location and finding out what had happened in the 17 years since. It is Far Cry by numbers for sure, but when the gameplay is so fun, and the world so pretty that was not an issue for me. Now I'm upto date I eagerly await the release of Far Cry 6 next year.

Posted by Daniel Simmonds at 03:34