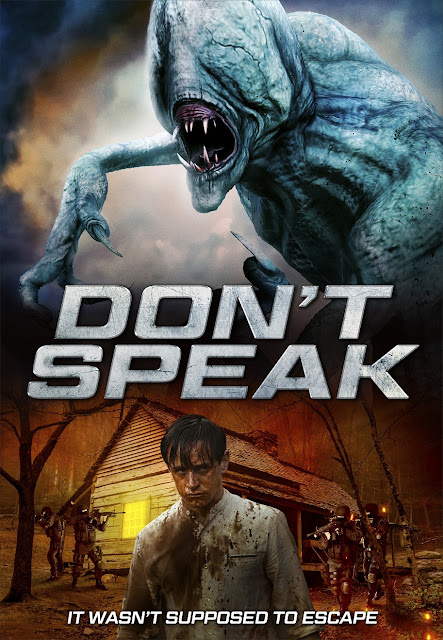 Don't Speak (originally known as Silent Place) is an indie horror film which was written and directed by Scott Jeffrey (Cupid, The Watcher 2). By either of its two titles it should be pretty obvious which successful horror of recent years this one is aping. Of course it is nowhere near the quality of A Quiet Place, however this surprised me with the atmosphere built up, and the bleak events shown.

Rita (Stephanie Lodge - The Watcher 2) arrives at her mum's remote farmhouse along with her family to find the place deserted. It isn't long before the family find things are far from ok. Dad, Alan (Ryan Davies - Heavy Duty) encounters a dying man whose last words warn him to run, while daughter Charlie (Georgina Jane - Cupid) gets attacked by some sort of creature in the barn. They soon learn this deadly creature attacks by sound, and so over one bloody night they attempt to regroup and escape the place. 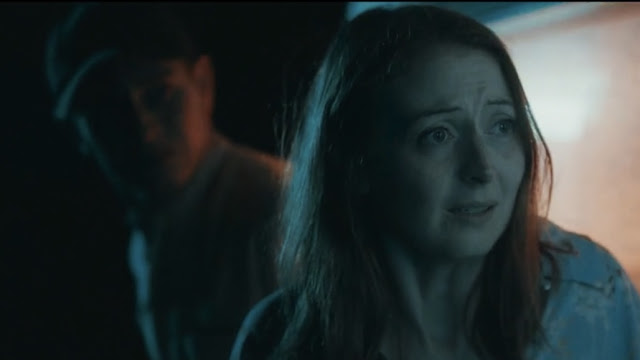 I have seen a few of Scott Jeffrey's horror films this year and so I figured I would know what to expect. They are not really the highest in quality, often times the acting is suspect, and the indie budget is really obvious. In that respect I was blown away by Don't Speak. It features some good looking make-up effects, acting that on the whole really wasn't bad, and an atmosphere I felt pulled into. In fact the only thing really holding this back from a higher score was the story that didn't really do much. I'm fine with there not being much of an explanation for the events that transpire, but the minute to minute story beats here just seemed to consist of random family members getting separated from each other, and then other family members causing distractions so that whoever happens to be currently getting attacked can get away. If it wasn't for the moody vibe I feel this may have become boring.

There is a small cast here, and it is not all of the characters who really shone for me. Principal among these was Charlie, I was shocked to learn this was played by Jane, her leading role in Cupid wasn't fantastic, but here she was so much better. Admittedly she doesn't do much more than suffer here, but she portrays someone in deep shock very well. Davies was another memorable character, despite, like everyone else here, not having much to him. With sound being a big danger there is barely any dialogue here at all, once past the first act which sets up the arrival of the family. Mostly characters either scream, whisper or cry, this just serves the movie well, probably a good thing there isn't more of a script. 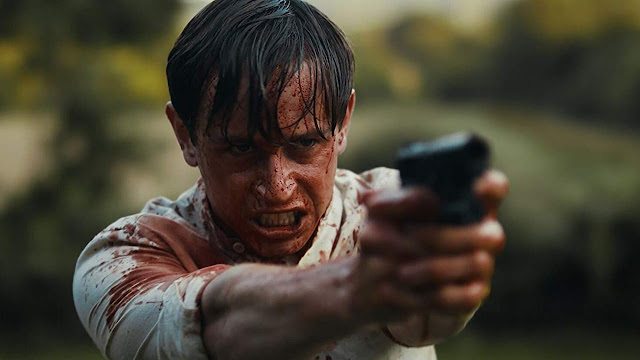 Being so derivative of A Quiet Place does hamper this in terms of the originality, but this had more in feel with the third act of Tricia Lee's Silent Retreat than anything else, and this was mainly down to the lovely amount of blood and gore on show. Whenever a character gets attacked things get very messy with blood spraying everywhere, even nearby characters get covered in crimson gore when these assaults happen. Facture in the creature also drooling thick mucus over its victims and you have actors who are caked head to toe in fluids which just adds to the misery they convey. It all looks pretty decent as well. The creature design is one of the weaker parts of Don't Speak. They are humanoid, creeping around on all fours, but aside from the cool looking head part of the design these do kind of look like people in costumes, rather than monsters. They are not hidden from view, but they are always draped in shadow, especially once the sun sets around halfway through.

Having seen a few of the director's previous horror films I felt I knew what to expect with this one. This was a lot better than my expectations. I'm a sucker for blood in movies, and I'm a sucker for stories that put characters through Hell. Sure, the story is not original in the slightest, and it does suffer for not having many ideas on what the characters here are trying to do, but overall I found this engaging. Don't Speak releases on February 22nd 2021 from High Fliers Films.

Posted by Daniel Simmonds at 07:02