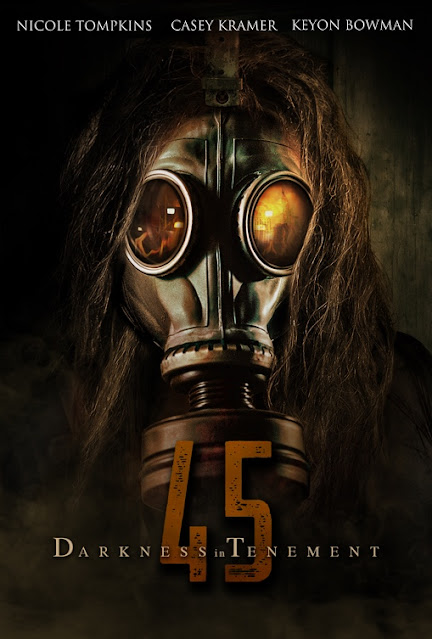 Darkness in Tenement 45 is a psychological horror that takes place entirely within the confines of the titular 'tenement 45'. It can also be described as a post apocalyptic movie, but with the unique concept of being set in the 1950's rather than in the future. This was directed and written by Nicole Groton (additional crew on Zombieland: Double Tap, X-Men: Apocalypse) in what was her first feature length movie in those roles.

It is 1953 during the first Cold War between the United States and Russia, and after a suspected biological weapons attack the inhabitants of tenement 45 following government guidelines have barricaded themselves in their building sealing up all doors and windows to stop any potential gas getting in. They fear that the outside world is now uninhabitable, but with dwindling supplies they are forced to send someone out to gather resources. The adults hold regular meetings, presided over by Felix (David Labiosa - The Entity) and the stern Martha (Casey Kramer - Dexter), but it is when Felix decides to volunteer himself to leave the building that things begin to devolve. As the days go by and there is no sign of Felix's return Martha gets increasingly paranoid and more and more controlling. The children, led by Martha's troubled 16 year old niece Joanna (Nicole Tompkins - voice of Jill Valentine in the Resident Evil 3 remake) and Walter (Keyon Bowman - Fox Pointe) decide they need to take matters into their own hands, especially when there are hints that the outside world may not be as deadly as they have all been led to believe... 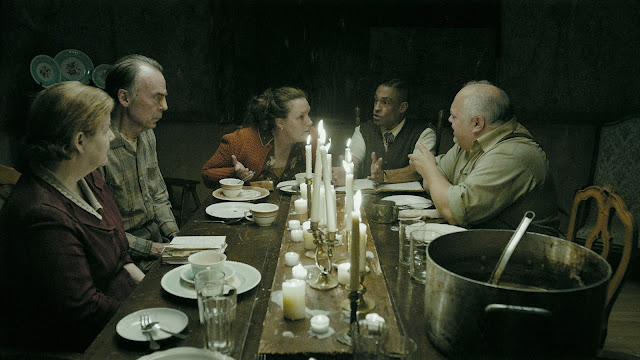 Even before things went sour here I had a good idea of where this would go. For a film that takes place in a singular location it was important that the characters be more than just stereotypes and with this it mostly succeeds. Much of the film is shown from the children's perspective, thinking back I'm not sure there is a single scene that doesn't have at least one of the younger cast in it. With Martha in particular it was easy to see the dark path she would go on. With Felix gone and her in complete control it is the old adage that 'absolute power corrupts absolutely'. It would be unfair to say it is just the adults who have their demons to them. Joanna is a prime example of this, the 'darkness' in the title refers literally to the increasingly hostile situation in the tenement building, but it also is what Joanna has termed her mental affliction. She is troubled, with it being hinted at that she had experienced psychotic episodes in the past, which leads to the viewer seeing quite a few of her nightmares which include quite a bit of self harm. Felix's son Tomás (Nicolas Aleksandr Bolton) is another flawed individual, his age, and being confined to a building with so few others means he begins to take an unsavoury interest in his older sister.

The acting was mostly pretty good, especially with Tompkins, Kramer, Labiosa, and Anthony Marciona as the building superintendent, Horen. The younger actors were also mostly good, though a couple of the much younger ones were not as good. Sometimes it isn't really the actors fault. With the story being more involved with the children it meant some of the adult actors didn't have much to their roles. Two in particular had barely any lines. It would have been nice to get more of their perspective. The film is an hour 37 long and it did feel like it really needed this time to build up the atmosphere and claustrophobia. It helps that the time period means there isn't anything like mobile phones or computers to allow the characters to interact with the outside world, a huge part of the films mystery is trying to work out if the outside world is as dangerous as it sounds to be. Make-up effects at times look a bit amateur, in particular the self inflicted wounds that Joanna gets always looked bad, but on the whole they are mostly decent. 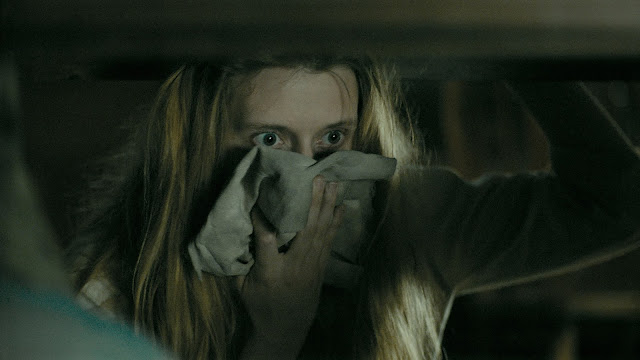 I seem to say this a lot nowadays but having a film about characters who are unable to leave their home did draw parallels with some of the real world stuff that has gone on this year, especially during the first lockdown (and likely subsequent lockdown due to start tomorrow (at the time this review goes up). A lot of the themes are about blindly following orders, the younger character's arcs have them slowly rebelling against the ingrained notion that they should follow the instructions of adults without question.

Darkness in Tenement 45 felt like an episode of The Twilight Zone developed into a feature film. The time period this was based in made this feel a lot different to the usual post-apocalyptic/dystopian horrors out there. It would have been nice to get more perspective from the adults characters but I still thought this was great. Darkness in Tenement 45 was released on November 3rd on Digital/VOD platforms thanks to Wood Entertainment.