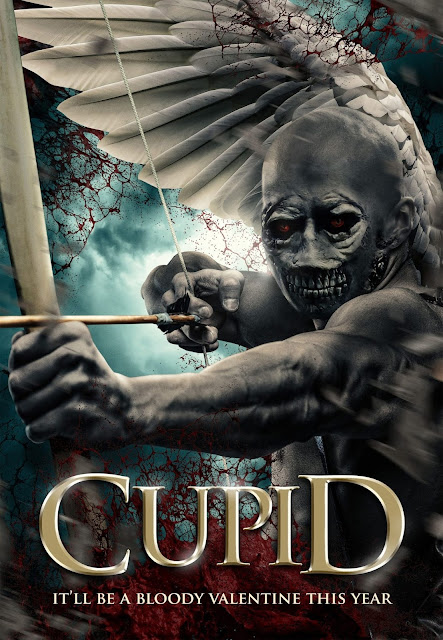 Cupid is a low budget indie horror film that comes from the director of The Watcher and The Watcher 2, Scott Jeffrey. It follows a generic template in that the killer here is a themed one, and that they kill using the theme they are associated with, in this case love.

The myth of Cupid had him saving his love, Psyche, from death by pricking her with one of his blessed arrows. The intro to this film says in actuality the arrow he pricked her with had been secretly poisoned and it killed her. In despair Cupid went to the underworld and teamed up with Death, to become an avenging angel determined to take love away from anyone who doesn't deserve it. In modern day bullied school girl Faye (Georgina Jane - Witches of Amityville Academy) reaches breaking point on Valentines Day after being the victim of a cruel trick. Blinded by anger she performs a spell from the book of Black Magic she happens to have. She wishes for the end to love for everyone who is in the school she is at, but she doesn't really expect it to work. It does however, and now a vengeful Cupid (Bao Tieu - Jurassic World: The Fallen Kingdom) has arrived to literally break the hearts of the chosen targets. 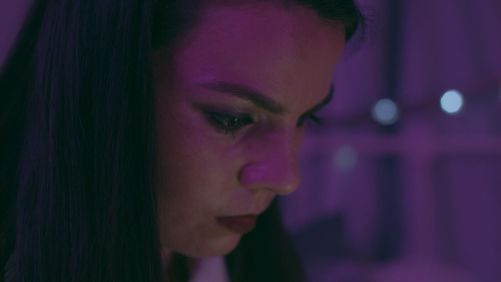 The first half of this felt a little like an extended episode of Grange Hill, acting that was passable but wasn't amazing, the topic of bullying and of improper teacher/student relationships was all so normal compared to usual horror films. It all serves a purpose as to why Faye would resort to such desperate measures. The small cast is split between the nasty bullies, and Faye, her best friend, and a few teachers, most of these characters were not great. I couldn't stand the bullies, Elise (Sarah T. Cohen - Witches of Amityville Academy, The Watcher 2) in particular was just the worst. That does make their inevitable deaths all the more appealing though. I did think to begin with that the school kids would all survive as the bodycount initially is all about the older characters. Thankfully they do factor in to the overall kill count, which included some decent kills. I like how the plot got bended to ensure everyone who (in a film sense) was deserving of death got their time to shine.

Cupid is able to fly, and his preferred method of killing is via a poisoned arrow. Sometimes he branches out, but a lot of these Valentine related deaths felt strange for an ancient demonic God to be using. Death via getting a throat slit with a Valentine's card, and death by having a bunch of roses stuffed down a victim's throat were cool. Not so much using a heart shaped cookie cutter to cut hearts out of a character's back, that was more lame looking! There was no real rhyme or reason to the order Cupid was targeting people. He seems able to teleport around, but was hit and miss whether he would outright kill a victim, or take them hostage for reasons that only worked if seen in context of creating more drama. There was plenty of blood, which was always nice to see. Not the best quality, but this part of the movie I didn't mind. Some of the props fared less well, in particular the spell book which looked like it was written with biro, I felt something more ancient looking should have been used for this. 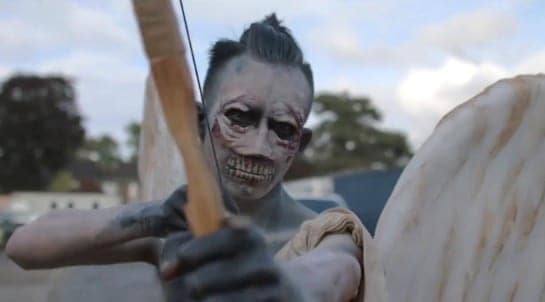 Cupid for what is was actually wasn't bad. The kills remained inventive, the most despicable people got their just desserts, and much seemed to have been made of the small budget. It wasn't the best acted, and the story was as bland as they come, but there was a certain charm here. Cupid is due to be released on 8th February 2021 from High Fliers Films.

Posted by Daniel Simmonds at 02:32