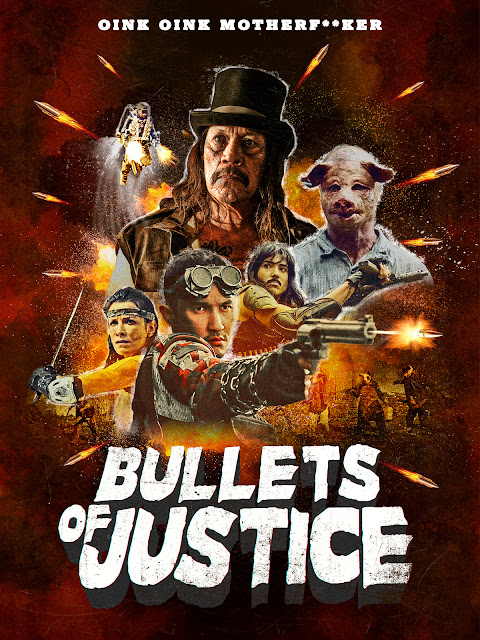 Bullets of Justice is one of those strange beasts of a film whose comedic value comes from how terrible it is, but with the awfulness of the film being very purposeful. As always with these types of film it is post apocalyptic (see also Cybernetic Showdown and Manborg), and features an extremely serious main lead unaware of how much of a walking caricature he is. This was directed by Valeri Milev (Wrong Turn 6: Last Resort), who also co-wrote it along with the actor who plays the main lead, Timur Turisbekov.

The film takes place in a world where World War III decimated humanity. The survivors of that calamity found themselves faced with a new threat, half pig/half human monsters that came to be known as 'muzzles'. The American and Russian armies teamed up to battle this new foe, and developed a bio-weapon designed to wipe out the pig creatures. Instead they discovered it had the unintended effect of making all humans and muzzles sterile, with the only exception being a near mythical muzzle called 'the pig mother'. Rob Justice (Turisbekov) is a former bounty hunter now working with the last remaining human resistance group, obsessed with finding and killing the pig mother in order to wipe out the muzzles for good. 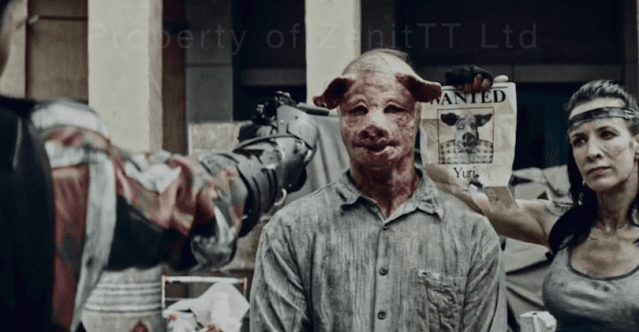 There are parts to Bullets of Justice that are excellent and there are parts of it that are terrible in a non-funny way. Right from the start the craziness of the world is displayed, opening as it does with a insane looking fight against a jet pack wearing, duel mini-gun wielding pig man, who has a little man hiding inside his jet pack armed with a gun. This really set the standard for the insanity of some of these fight sequences here. All the action scenes were amazing to witness and ridiculous at the same time. A gun fight that takes place with Rob having accidentally teleported half inside a wall, another gun fight in which he starts off naked, and somehow manages to get fully dressed as he fights, before leaping through a wall and landing perfectly in the driving seat of his truck. Moments like that were fantastic to see and show Bullets of Justice at its very best. Despite the effects sometimes looking awful (again, on purpose) there was a unified look to this, from the sets to the costume design it all look great.

Where the movie really fell down for me was the story, and the way it was told. I realise it is meant to be so bad it is good but I found myself constantly confused with what was going on. There are plot twists and turns that come out of nowhere, while the objectives of characters never seem to really matter. I found it hard to work out was what going on at any given time due to the way the film dances around scenes, sometimes putting them in strange orders so that you have to play catch-up. The characters are an odd mix of po-faced heroes and heroines with only a couple standing out. Rob's moustache wearing sister Raksha (Doroteya Toleva) features a lot, and they have an incestuous relationship that always felt pretty off. Adding to the confusion was a time travel plot device, but I actually loved that part of the film, more with what it insinuates than what the film shows. As unravelled as the story is it culminates in a very well done final showdown between Rob and his nemesis which features a great dialogue exchange that made me question a lot of what I had seen. It also features a final battle that was more dancing than fighting and had some good editing and camerawork. Of special mention was the soundtrack, Russian sounding dramatic tunes that fitted the vibe of the movie perfectly. 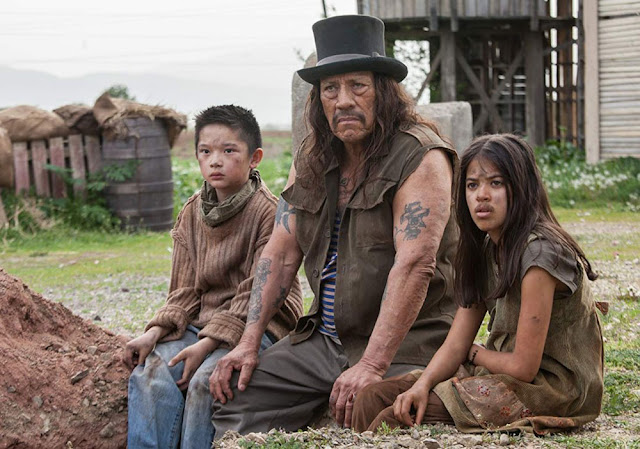 The comedy outside of the over the top action sequences never really stuck for me, often resorting to crude and gross moments that didn't resonate, or by being too strange to really understand the humour. Flashbacks to Rob and Raksha as kids have the adult actors still providing the voices is one such example. The actors all seemed fine, their roles never called for traditional acting, and many of their voices seemed dubbed over. Despite being front and centre on the films poster Danny Trejo has a minor role here, almost blink and you miss it, though was a highlight having him battle a pig man. The many scene changes and hard to follow story meant this felt a little exhausting at times, but with a run time of around 75 minutes it combated the fatigue of this.

Perhaps if there hadn't been better examples out there Bullets of Justice might have appealed to me more. As well made as this is, and as strong as some moments of this are there is a bit of heart missing, the convoluted and half told story detracted from my enjoyment. Bullets of Justice has released recently on digital/VOD thanks to The Horror Collective.