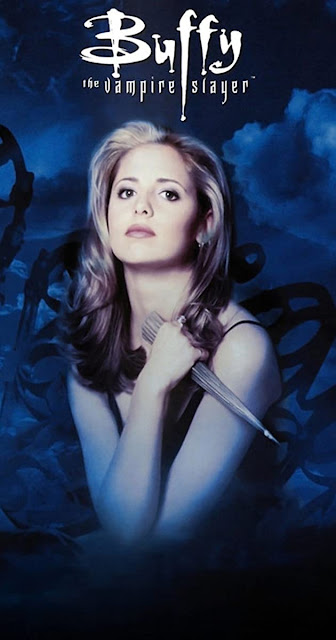 I am a huge fan of both Buffy the Vampire Slayer and Angel, yet I didn't actually start watching either the main show or the spin-off until they were multiple seasons in. I remember in the early 2000's it would be something that just happened to be on TV as me and my uni friends did pre-drinking on a Thursday night. Nowadays I have seen it a fair bit, it's one of those shows that might feel dated now, but it is still a blast. Season 1 consisted of just 12 episodes (all future seasons would feature 22) and it felt like it was finding its feet in terms of characters and the flow of the episodes.

For the few who don't know, Buffy the Vampire Slayer takes places in a universe where monsters exist, but the vast majority of humanity are blissfully unaware of this. Buffy (Sarah Michelle Gellar - I Know What You Did Last Summer) is a slayer; a female imbued with superhuman strength and tasked with killing monsters, specifically vampires. Each time a slayer dies a new one takes on their power, and Buffy is the latest. She moves to the town of Sunnydale with her mum, but unluckily for her the town is built on top of a 'hellmouth' which is a literal gateway to Hell, and so supernatural events happen more frequently than elsewhere. The Master (Mark Metcalf) is an ancient vampire who got trapped in the entrance to the hellmouth hundreds of years ago, and is getting close to finding a way to escaping his prison, which will be a terrible thing for the world. It is up to Buffy and her new friends; Xander (Nicholas Brendon), Willow (Alyson Hannigan) the librarian Giles (Anthony Head - Repo! The Genetic Opera), and friendly vampire Angel (David Boreanaz - Angel) to find a way to stop him. 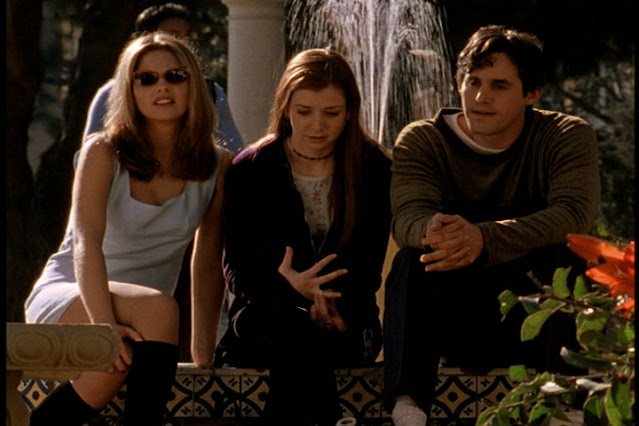 All of my criticisms that I'm going to mention here don't detract from my enjoyment of the show. Heading back to this first season again I found it supremely interesting seeing how it all originated. Some of the characters here are surprisingly well developed, while others spend much of the season heading down wrong paths, only for their development to get course corrected later on. Xander and Willow are both likable characters, yet in this season their storylines are terrible. It starts with episode one, Welcome to the Hellmouth in which their best friend, Jesse is taken (and eventually killed an episode later). This character is never ever mentioned again, the two friends seemingly replacing him with Buffy right away. Xander spends the entire season in love with Buffy, Willow spends the whole season in love with Xander. Neither of these two storylines go anywhere and it just felt so by the numbers, so it is good that these plotlines later get abandoned. Also with Willow, her defining characteristic being she is some sort of hacker thankfully gets dropped in later seasons. Giles was a great character, I had nothing bad to say about him, not so much his counterpart, Jenny (Robia Scott) who first appears in one of the episodes that had dated the worst, I Robot... You Jane in which a demon gets reborn on the internet. Having Jenny and her I.T students sat around PC's with tiny screened huge monitors and talking about 'surfing the web' was quite cringe in modern context.
While Giles and Buffy are both great characters I also enjoyed Angel's inclusion in this season, appearing as an enigmatic person who comes across as a bit neutral in the conflict, before the mid-season reveal that he is actually a vampire. He always felt like someone who was more interesting the less you knew about him. It is Cordelia (Charisma Carpenter) who was the biggest surprise in that she gets the most development over the season. She starts off as a self centered popular kid who gets joy in bullying those she sees as beneath her. By seasons end she is fully clued in to the evils of the world and shows her version of respect for the protagonists.

As cool as The Master is he really doesn't feature much. It doesn't help that for all but the final episode (Prophecy Girl) he is trapped underground not able to do much of anything. He mainly just talks and talks and talks which was interesting, but hardly exciting. The rest of the bad guys are made up of 'monster of the week' antagonists, such as in episodes Witch, Teacher's Pet, The Pack, The Puppet Show and Out of Mind, Out of Sight. This leaves only five out of the twelve episodes that relate to the main storyline for the season. It was nice to see characters that would later be given greater significance, such as the vampire Darla (Julie Benz - Angel), Amy (Elizabeth Anne Allen), and even the puppet Sid would turn up in a later season (not a hundred percent sure on that one). I found it funny the amount of cliffhanging endings there were, especially considering these would never get revisited. Things such as a soul trapped in a statue, an undiscovered egg, and a secret facility for special people all never ever get mentioned again, and felt like they were there just as an idea for how to end whichever particular episode they are in. The show over the course of seven seasons had a lot of out-there episodes, ones that take place in dreams or alternate realities, it all starts here with episode ten, Nightmares that has some cool ideas, such as showing what Buffy would look like if she was a vampire. 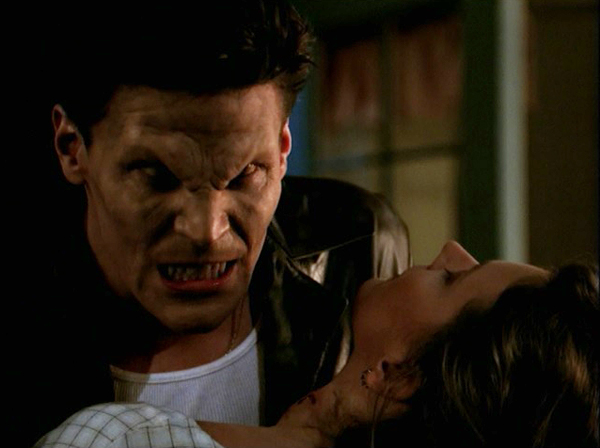 The special effects are dated now, especially the CG that looks terrible to a modern eye. Some of the more practical effects are neat enough, I liked the puppetry of the hellmouth in the final episode for instance. The action sequences never fail to feel kinda lame. Fights are brief and lack impact, while Gellar appears to be swapped out for her stunt/fight double at every opportunity. The show still remains really quite funny, the scripts are always a highlight, leading to a few moments that still make me laugh out loud.

Buffy the Vampire Slayer: Season 1 is definitely the weakest of the seasons. With half the episodes, characters who have not yet found their path and too many standalone stories it pales in comparison. Regardless, it is still wonderful, enjoyable, and a great introduction. Roll on season 2.