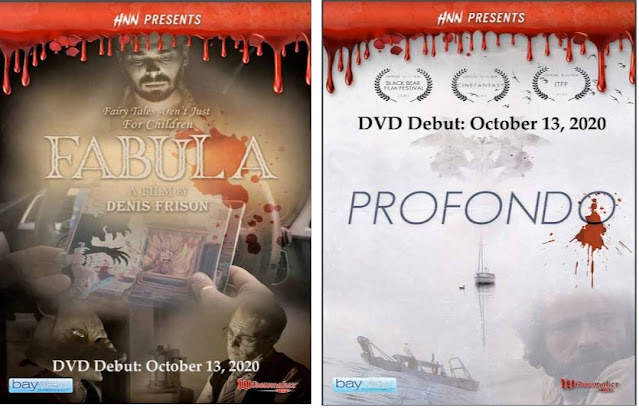 I've been getting a bunch of emails telling me about new Bayview Entertainment releases so thought I would share them all here. On the 'HNN Presents' label comes the first bunch.

Fabula and Profondo are now out on DVD. In Fabula a former detective (Denis Frison) arrives in a small Italian town which has a serial killer on the loose. He soon discovers the killer is inspired by fairy tales, and his investigation leads to a nightmare revelation about the killer's motive.
Profondo sees Leo arriving in a small seaside village. He goes in search of the 'Red Devil', which is a legendary marine animal that has inspired folklore in the area.

Psycho Therapy and Keeping Rosy are also now out under the 'HNN Presents' label. The former is about a therapist who goes insane and starts going after her patients.
Keeping Rosy is a British psycho-thriller. It stars Maxine Peake (The Theory of Everything) as a business woman who snaps and kills her cleaning lady after a tough day at work. Using her coldness she has learned through her daily life she works to cover up the crime.
Toro Loco Bloodthirsty is an action comedy from Chilean genre specialist Patricio Valladares. This follows a grizzled stranger who arrives in small town ruled over by a ruthless crime boss and his paraplegic son. With the help of a young woman, her geeky brother and a drag queen, the stranger sets out to clean the town.
Female Werewolf is about a mentally unstable woman who believes she may be a werewolf. This comes from Chris Alexander and is a HorrorNews.net presentation.
The final two releases from HNN Presents are Bunny The Killer Thing and If He Hollers. I reviewed the comedy horror Bunny back in 2018 and said of it "...this is a film so wonderfully shot and with such a likable cast that I was glued to the movie right up until the very end".
If He Hollers is a Mexican thriller about an innocent bachelorette party that goes very out of control after a group of female friends encounter a cowboy and secretly give him Viagra.
Reap and Insanity are two more horrors from Bayview Entertainment. In Reap a mysterious stranger arrives at a house party and informs the guests that they are all destined to die that night. They are told they must find replacements so that they can escape their destinies.
Insanity has a group of friends heading to an island for a class reunion. There, old grudges from their past come back to haunt them leading to mayhem.
Released on 16th November was Waratah. This one is described as 'An exciting, terrifying, and humorous psycho-thriller'. An ambitious actor and an albino with mental powers are connected by the sweet and innocent Trey Swift.
Finally, on 27th October the lovely Teacher Shortage came to DVD. I have had dealings with the director, Troy Escamilla and can assert that he seems like a great guy who really loves his slasher movies. In my review back in February I said "The soundtrack is killer, the kill scenes look wonderful...this was a blast to watch from start to finish".
Posted by Daniel Simmonds at 08:19