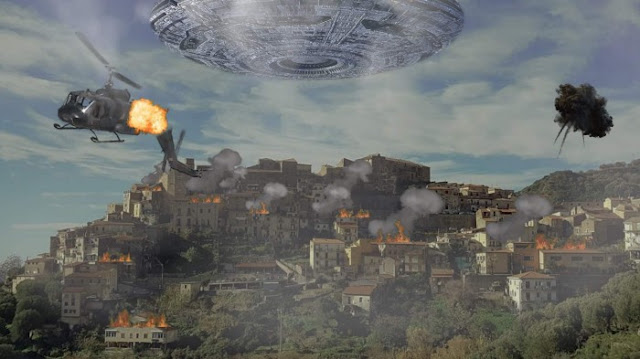 This month I have been experimenting with putting up a blog post daily, with the hopes being that I may be able to get rid of my monthly news post round-up. I have David Black (Sinister Symbiosis), the writer and producer of upcoming sci-fi/horror film Toxic Alien Zombie Babes From Outer Space to thank for the idea, as his film was the first in a good few years that received its own news post, and I found it was not too much extra work for me to get done on the weekend during my blog time.

Anyway, it is another week and another press release about his upcoming movie. The film is now going to be offered to all cinemas worldwide for free, which is a cool thing to offer. Toxic Alien Zombie Babes From Outer Space pays homage to b-movie sci-fi and horror of the 1950's to 70's while also keeping current by including such topics as the pandemic, murder hornets, 5g and various conspiracies. David Black said of the offer "Challenging times like these necessitate creative thinking. We've been under stage 3 and 4 lockdown from the moment we started filming so we had to come up with unique ideas to make this movie. I believe that if cinemas wish to survive then they will have to open their minds too and find new ways of doing things. We are offering them an opportunity to screen a film and keep 100% of the revenue. It's now up to them as to what steps they take next." The film will be free to cinemas in January 2021. For more details about the film check out its Facebook page.