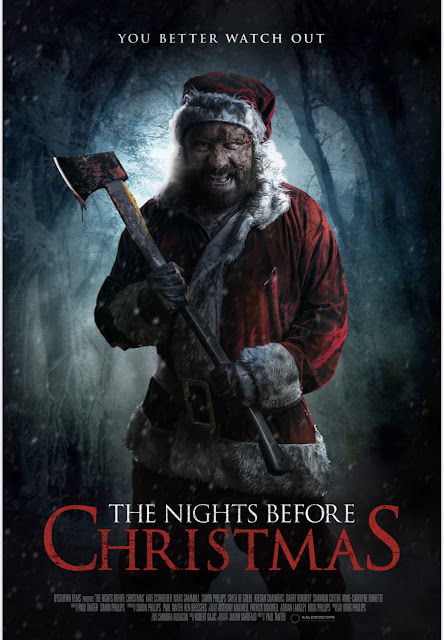 The season to be jolly for whatever reason works really well when combined with horror. Such is the case with The Nights Before Christmas, which is a festive horror featuring a cruelly sadistic killer. This is a sequel to the 2017 film Once Upon a Time at Christmas, and it plays out very much as a sequel, meaning I was left playing catch-up for the majority of this one due to not having seen the first. It seems to be the middle part of a trilogy, with the third film, One Christmas Night in a Toy Store currently in pre-production. All feature Paul Tanter as the director and co-writer, with main lead Simon Phillips also co-writing. Even though I haven't seen the previous film there will be spoilers for that one.

Some years previously, mad man Nicholas (Phillips), who revels in taking on the persona of Santa Claus, faked his own death at the asylum where he had been imprisoned. Now he is back, and with the help of his crazed assistant, Mrs. Claus (Sayla de Goede) he goes on a new killing spree, targeting people on his 'naughty or nice' list. As he settles old scores and cleans house, F.B.I agent Natalie Parker (Kate Schroder) sets out to stop him once and for all.

I will start off with the best thing about The Nights Before Christmas and that is Phillips. He is amazing as the twisted Santa Claus, stealing every scene he is in. He has a real presence to him, and his demented plans, and disregard for life makes him a formidable opponent. He felt like a combination of The Joker from the Batman franchise and Papa Lazarou from The League of Gentlemen and seemed to have a lot of fun with his role. Mrs. Claus felt like an obvious stand-in for Harley Quinn, she even looks the part with her hair in bunches, and being very physical with the way she moves. It is good that the bad guys are so memorable, as the protagonists are all infuriatingly stupid people. They make so many dumb mistakes and decisions that it managed to hamper my enjoyment. The good guys make unbelievably dense errors in judgment throughout the movie. There is a serial killer on the loose who fashions himself on Santa Claus, you would think that information would be important to the authorities. Instead when a bloody man in a Santa costume sets up an obvious roadblock for a police convoy, the police assume he is just a civilian with a broken down car, it was maddening how stupid everyone was. It got to the point where I gave up, as far as I was concerned all the protagonists deserved to die. A little bit of this is fine, but when literally every single good character is acting dumb it begins to get hard to really care about what happens. Also, I lost count of the amount of time the bad guys were being held at gunpoint, but the gun holder would refuse to shoot, even when they are killing people right in front of them!

This isn't a film which takes itself seriously and this can be seen in some of the death sequences, at least one of which is played for laughs. The many kills have some variety to them, such as a character hung with christmas lights, and a poor man whose genitalia gets cut off with some sort of garden implement! It all looks good, with plenty of blood and make-up effects to sell the gruesome kills. Nicholas has plenty of one liners for each of his kills, rather than come across as corny they do fit his demented persona. I can't play down how much Phillips manages to elevate this movie. While it gets plenty dark in places there are some nice touches that keep things from getting too bleak. One of these was having a slasher that was combined with a police crime drama.

Being a sequel I was plenty lost as to what had previously took place. There seemed a fair amount of flashbacks, I assume clips from the first movie were used. I wasn't really sure exactly what had happened prior to the killer being incarcerated previously. I also assume a lot of the characters who feature were ones from the first film returning. The protagonists were so spread out that there never really felt like there was a main one. Initially, in the prologue it seemed this young woman was going to be the protagonist, but then it seemed to eventually fall on the shoulders of Natalie Parker, a new character, who as I said previously makes the most boneheaded decisions at every possible instance. There wasn't really much of a story, the big mystery being for what reasons the killer was killing who he was.

The Nights Before Christmas is a slick looking horror that excels with any scenes involving Simon Phillips. However, by neglecting to give his character an adequate counterpart on the side of good it meant that it felt like there was something missing here. If you've seen the first movie and enjoyed it I am sure you will like this also, if you're just in the mood for a Christmas themed horror then this can also scratch that itch. The Nights Before Christmas is released on DVD and all major home entertainment platforms on 2nd November in the UK through Kaleidoscope Entertainment, with a U.S, Australian and New Zealand release in December.