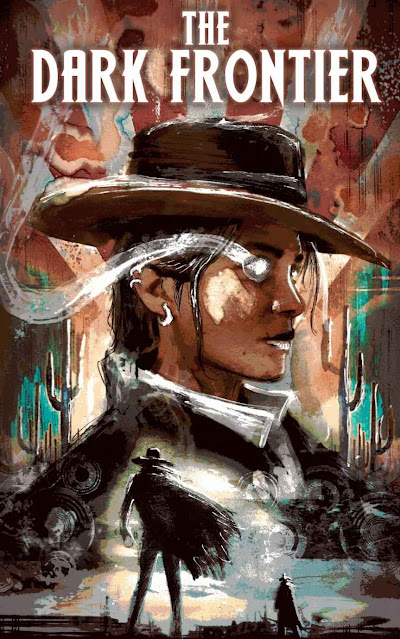 Back in August when I reviewed the animal horror anthology Animal Uprising! I was offered the chance to review another anthology, the western themed The Dark Frontier. I used to read so much as a teenager but nowadays barely get through more than four or five books a year. Maybe due to not reading as much as I should, with this anthology I discovered a new genre that I somehow didn't know even existed, which combines the feel of the Wild West with the post apocalypse.

The Dark Frontier is split into two different styles of story, those that literally take place in western times America, and those that certainly do not, but whose vibe makes it feel like they share common traits. What all stories also share in common is a feeling of taking place in a world whose outcome is already set in stone. Many of these worlds are doomed, so much so that the characters who populate the tales are too small cogs to have much effect, this in its own way creates a feeling of vast emptiness, and desperation, echoing the endless plains of the dark frontiers. I must add that after the final story there is an interesting afterword that explains exactly how the order of the stories were put together, it was neat to see the reasoning.

This all kicks off with Cargo Mountain by Charles R. Bernard. This was the story that introduced me to the concept of the future meeting the past as I was quite thrown when the protagonist here is shown to have a motorbike. I'm very on board with the idea thankfully! This one had a dreamy atmosphere which I loved, have to admit I had no idea how it ends, it just seemed to finish abruptly, but that seemed to go well with the feverish feel.
The fifth story, The Harvestmen by Aubrey Campbell returns to the post apocalypse with a story about a woman with a magical gun capable of destroying the gigantic demonic spider like creatures that have overrun the world. Almost a companion to this one is Take the Desert with You by Joanna Parypinski that features a protagonist who wasn't as innocent as at first appears. Both these stories are really quite bleak which is always a good thing.
I wasn't entirely sure about Douglas Smith's Memories of the Dead Man. It had some really neat ideas to it, but the titular 'Dead Man' character cemented in my mind Arnold Schwarzenegger's Terminator and so that was all I could think of when reading this, which was a bit distracting. It's a classic story of revenge and features a psychotic biker gang and plenty of violence so was still a decent read.
At the time I read it The Bride's Road by Hawk and Young was my favourite. This sci-fi yarn felt like A Clockwork Orange mixed with Logan's Run. I enjoyed the idea of a future regressed society shepherded by robotic drones who are seen by the people as religious beings, a lot of cool ideas.
The final story that felt post-apocalyptic was the Mad Max feeling One Way Out by Bryan Dyke, that tells the story of a ranger trying to make his escape from a twisted cult's compound in a dark future world. Like so many of the stories here I would love to read more from this world, it was fascinating, even if slightly cliche at times.

All on its own due to being so darn weird was Jacob Floyd's Rise, Vega. This was an inventive story set in the afterlife, which managed to be both funny and exciting. My meagre notes on this one read "would love to read more". Any story which includes both walking cacti and a lethal little dog (who reminded me a lot of 'The Killer Rabbit of Caerbannog' from Monty Python and the Holy Grail) gets a pass by me.

The rest of the stories seemed to take place in the traditional western period. The second tale, On the Road to Madness by Armand Rosamillia is about a wanted criminal, and the man hunting him who have a fateful meeting in a strange cave as an endless nightmarish storm devours the world outside.
Stuart Conover's The Hard Cases is about a vampire who arrives in a frontier town in the search for a magical relic. Talking of relics, the next one, Starless and Bible-black by Lee Clark Zumpe ups the excitement factor by showing the consequences of removing a sacred crucifix from what may just be a gateway to Hell. This one I really enjoyed, and made good use of a prologue and epilogue time jump. Also by Zumpe was The Man From Turkey Creek Canyon which also featured opening and closing time jumps. I thought this one was ok, but I never found myself caring too much about the characters here. The same could be said of Christine Morgan's The Crossing at Bony Ford whose story about a condemned man's journey across an unnatural feeling landscape was a good read, if a little familiar with the way it plays out.
Cassidy Frost's Henry Rain would have been good on its own, but this was by far the most grounded story contained within The Dark Frontier and so surrounded by bizarreness it didn't make much of an impression.
Bad Air was I think my favourite short from this anthology. It was certainly the most creepy. Jack Lothian's story takes place in the middle of nowhere, centered around a train that has mysteriously stopped. There was a comforting feel of H.P Lovecraft to this one.
The collection closes out with It's Not Only Outside by Micah Castle. A brief one which nonetheless stuck in the mind, if not only for the idea of a huge wall of darkness that pulls its victims into it.

I wasn't sure what to expect when I started reading The Dark Frontier, thankfully it is yet another good anthology that is full of surprises despite many of the shorts sharing a similar bond of darkness engulfing the world. The Dark Frontier is out now, thanks to Wild West Press.